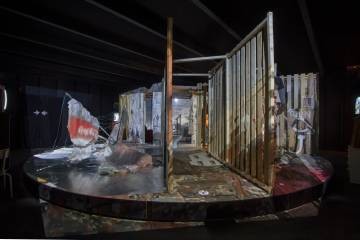 In response to the prevailing mood of political exhaustion and great instability of the overall political climate in and around Europe, The Alien Within questions the future of Western society, in particular the endangerment of its structures by a conscious deployment and politicization of fear as a new norm.

Within such a scenario, many questions arise: Should art practices address inconvenient issues head-on, forcing us to take a position? Can they dominate our demons, exorcise our undesirable fears in good? Does fear form the basis for a 21st-century European cosmopolitanism able to confront the wish for government and ungovernable paranoia? Can a medium-sized Scandinavian city like Malmö epitomize this model, and be celebrated for it?

The Alien Within is an ambitious project realized in close cooperation with the Goethe-Institut. Nurtured by the multiculturalism of Malmö, it brings together a think tank around the eclectic multi-media installation Animatograph – Icelandic Edition. Destroy Thingvellir, 2005, by the late German theatre director, filmmaker, and visual artist Christoph Schlingensief (1960–2010). This is framed by documentation material presenting the genesis and development of this installation, related to a selection of his most political work.

The Animatograph is Schlingensief’s first presentation in an art institution in Scandinavia, and one of the rare installation works kept intact. Commissioned for the 2005 Reykjavík Arts Festival by Thyssen-Bornemisza Art Contemporary, Vienna, it is a large-scale revolving and walk-on stage combining building elements, props, and screens that attest to the artist ́s extraordinary ability to undermine the traditional media of art, cinema, and theatre. It is a performance as well as a projection screen able to spatially draw spectators into filmic scenes, showing how reality encompasses fiction. Here viewers are flooded by a disorderly collection of overpowering images without a straightforward storyline; they expose civilizational struggles at a religious, political, historical, and personal level. European traditions and Nordic myths overlap with pagan spirits, legendary heroes, and African shamanistic customs: from the Icelandic and German epic poems Edda and Nibelungenlied [The Song of the Nibelungs] to Richard Wagner’s operas, via the origin of democratic parliamentarianism in Iceland and the barbarian rule in Lüderitz, Namibia, by German South-West Africa prior to 1915. As a “soul-writer” of 21st-century human nature and an “organ of vision,” the Animatograph records impressions of urban realities, rearranging and re-transmitting them in a chaotic cosmos that reflects the disparate contexts where it was shown. In a permanent altering state, its revolving stage symbolizes the indeterminate nature of social systems across the world.

Taking inspiration from Schlingensief ́s experimental ideas, The Alien Within morphs into an open-ended site of research. Intermittently throughout the duration of the project, talks, screenings, live concerts, and performances are held by Swedish and international artists such as, among others, Tania Bruguera, The Errorists (Hilary Koob-Sassen and Andreas Köhler), Jeuno JE Kim and Ewa Einhorn, the independent theatre group Institutet, as well as renowned scholars like filmmaker-theorist Trinh T. Minh-ha and sociologist Saskia Sassen. Their contributions seek to arouse debate around subjects such as the elaboration of a future for cosmopolitanism, the ability of fear to generate images and reshape the mechanisms of media and society, the timeless debate on the cross-over between art and politics.

The think tank proposes a laboratory in which socio-political situations, cultural traditions, and artistic methodologies resonate with and over-paint one another. These are analyzed through the lens of Malmö ́s specific urban setting where almost one-third of its citizens is born abroad – a trend currently on the rise – and planning strategies have built away a decaying post-industrial past in the hopes of attracting knowledge-based industries. These have left unsolved issues related to the city’s history of immigration and ethnic segregation, now at the center of intense public debate. The Alien Within intends to address how every person is an active agent in creating the world we inhabit together. It does so by reflecting on forward-thinking models of contemporary Western society , while giving audiences the opportunity to take responsibility for the world as it is and celebrating the cosmopolitan fabric that makes up the Konsthall ́s own urban reality.
www.konsthall.malmo.se