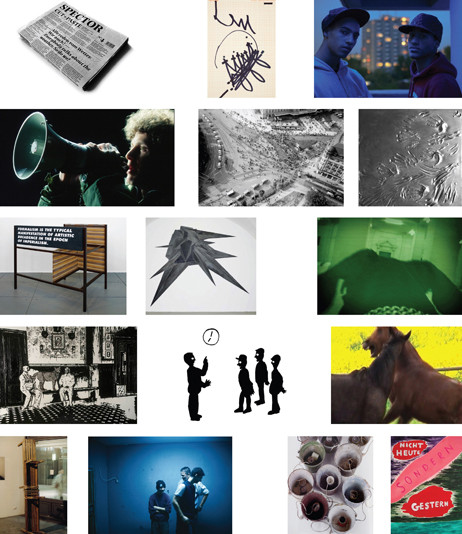 20 years after the fall of the Berlin Wall, we sum up the development of conceptual and socially oriented art in Leipzig since the end of the nineties. Three consecutive exhibitions bring together 28 artists, graphic designers and collectives.

We call for a nuanced discussion on the societal change and its artistic resonance in the second decade after Germany’s reunification. For the first time, this chapter of most recent German art is explored in an exhibition series that regroups essential positions and artworks.

The generation we address manages to overcome the dichotomy of political blocs, since it has been experiencing ignorance, ideological stubbornness and genuine solidarity in all camps. Moreover, amidst the drastic social and cultural conversions following the peaceful revolution in Leipzig’s streets, these artists have been sharing the disorientation, the remaining hope and the growing skepticism of many. A skepticism that characterizes their work.

In 1997, documenta X looked back on the politicization of art since the sixties. Simultaneously, Leipzig-based artists were establishing links to international (Western) artistic developments of the postwar period that had been missing. By doing so, they questioned whether Abstraction, Pop Art, Minimalism, Conceptual Art and Institutional Critique could contribute to a modified societal situation.
The result is a remarkable variety of artistic vocabularies with a critical stance. Its diversity rejects any notion of a local school or style, even though numerous collaborations in debate and production confirm a great sense of solidarity within this scene over the years.

Three exhibition chapters take the perspective of Richard Rorty’s political philosophy in order to raise key issues of the advanced reunification process that have been occurring in contemporary art from Leipzig.
As a pragmatist, Rorty saw no point in separating reality from representation, the world “as it really is” from its “mere description”.
Rather, he distinguished those descriptions of reality that would inspire and encourage a liberal democracy from others that would not. This is what his “Antirepresentationalism” stands for. It radically politicizes philosophy to give the quest for solidarity priority over the quest for cognition. Since Rorty did not apply this call for solidarity to the visual arts, our exhibition inquires the possible outcome of such an application.

With ANTIREPRESENTATIONALISM, KOCH OBERHUBER WOLFF inaugurate their gallery spaces in a new building by Berlin-based architect Brandlhuber at Brunnenstrasse 9 in Berlin-Mitte.