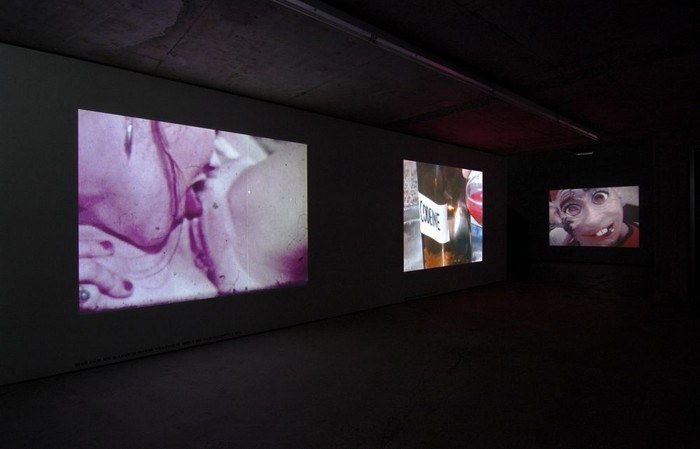 The documentary and experimental films of Barbara Hammer are considered among the earliest and most extensive representations of lesbian identity, love, and sexuality. To date, Hammer’s work has received little attention from the art world. Yet film retrospectives at New York’s MoMA (2010) and the Tate Modern, London, (2012) are now recalling the artist, who was born in Hollywood in 1939, as a pioneer of queer cinema who made decisive contributions to feminism and gay liberation as well as avant-garde cinema and performance art. On the occasion of Hammer’s eighth participation in the Berlin International Film Festival, we are pleased to present the first ever-solo show of her work, with a focus on the 1970s.

To the extent that love between women had made it into the movies at all, it remained embedded in a matrix of heterosexual—and almost exclusively male—gazes and narrative forms. “Even if the characters were lesbian, the script projects lesbian characters within a heterosexual world of role-playing, lovemaking, and domestic and professional life,” Hammer wrote (1). In order to create independent representations of women’s passion for their own gender and to bring them to theaters, Barbara Hammer and the circle of lesbian feminists of which she was a member in early-1970s San Francisco discarded conventional cinematic practices and started from scratch. Beginning in 1970, Hammer experimented with filmic representations of a new lesbian self-awareness that was only just breaking free from social taboos. “Visibility was the central concern for lesbians making cinema at this time, for the simple and profoundly sad reason that there were few or no pictures, images, or representations available. The screen space, on and off, was blank. Not just marginalized, but not there. There was no cinema to deconstruct. There was no gaze to analyze. [...] We stepped into the void, the invisible, the blank screen, and named ourselves ‘lesbian.’”(2)

Using a hand-held camera, Hammer initially shot on 8 mm stock. Her second film—created in 1968 while the artist is still married, and her name is Barbara Ward—programmatically shows the desecration of a graveyard. Though only at the beginning of her development as an artist, she already disturbs the peace of the dead, confidently erecting a monument to herself amid them: “Barbara Ward Will Never Die.” The young filmmaker stakes her claim to a place in history. From now on she will document her own coming-out and her sexual liberation (“X,” 1973). She creates portraits of herself and lovers in lesbian relationships and biographies (“Double Strength,” 1978) and seeks to define an active, participant, and passionate gaze on lesbian sex. Her films broach taboos such as the female orgasm and menstruation. The rise of the performance art movement inspires films such as “Menses” (1974) and “Superdyke” (1975), created spontaneously during collective actions and ritual experiments. The feminist occupation of public spaces—including San Francisco’s city hall—and the parodic appropriation of cinematographic myths of masculinity ranging from Robin Hood to Easy Rider coalesce in “Superdyke.” “Blue Film No. 6: Love Is Where You Find It” (1998) is a found porn flick: a threesome. Hammer excises the male part, retaining the two ladies and an amusing digest of voyeuristic platitudes.

Hammer frequently appears in front of the camera, by herself or with friends, filling the cinematic screen with her own presence. She participates in the feminist project of making the private—in her case, even the most intimate aspects of life—public. To date, she has created an oeuvre comprising ca. eighty films, beginning with short and experimental formats but soon adding more extensive documentary works. Hammer, who moved to New York in 1983, time and again reflects on her own life and body, for instance addressing her bout with cancer in “A Horse Is Not a Metaphor” (2009). At the same time, she works to create filmic structures beyond narrative, linear space and linear time, by chronicling the biographies of marginalized women, and experiments with the filmic material itself.