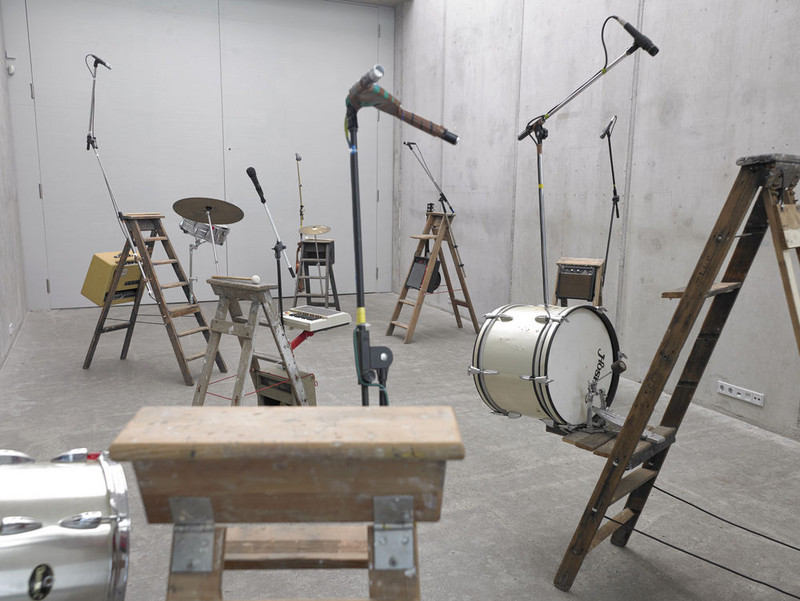 Lemons are being passed around. Their juice relieves the burning in the mouth and nose. It is April 17, 2011, the last day of public revolt before the suppression of the Iraqi Spring, which was barely mentioned in the international media. Amid the protesting crowd, breathing the air laced with tear gas, are two musicians: Hiwa K with his harmonica, Daroon Othman on the guitar. They play the movie score from "Once Upon a Time in the West", that alarming melody of two dissonant notes, immediately recognizable to everyone in the streets of Sulaimany, Kurdistan. It carries the disappointed hopes of many years out into the street and unites the marchers by spreading a sense of somber determination. As Hiwa K plays the harmonica, the tear gas invades his airways; music and the political situation coincide in the performer’s body. He subsequently compiled video footage shot by others in the documentary THIS LEMON TASTES OF APPLE. The title ties the events of 2011 back to Saddam Hussein’s genocidal campaign against the Kurds in 1988. The gas that was used back then smelled of apples.

Hiwa K’s intervention was part of the protest march – the video, like many of his works, grew directly out of a literal as well as figurative movement, created, as it were, “on the go.” The musician and artist, who was born in Kurdistan (northern Iraq) in 1975 and has lived in Berlin since 2010, says of himself that he is based on his feet: his praxis responds to changing situations with deliberate reflexes. What he does, he argues, echoes all the symptoms of Western art’s idioms and rules, but without adopting them outright. MOON CALENDAR, IRAQ, 2007: Hiwa K rehearses for a performance inside the Amna Souraka prison complex (the "Red Security Building"), where the former regime tortured political detainees, now a Museum of war crimes. We see him in a bare hall, tap-dancing to the rhythm of his own heartbeat. Holding a stethoscope to his chest, he listens to his pulse and transmits it to the floor by thrusting of his feet, the sound of which reverberates throughout the room. The tapping becomes an amplifier and measuring device publicizing the process playing out inside the dancer as he builds a connection with the site through an acoustic feedback loop.

Hiwa K recorded his research at Amna Souraka on video. Again, his goal was not to devise an aesthetic gesture; he acted in direct response to a place and event, without aiming at representation or a formally self-contained work. His practice represents a challenge to the generic categories with which the art world operates. It is recognizably informed by conceptual perspectives and Institutional Critique, but also shows a strong affinity to intersubjective narrative modes in oral history and informal moments of encounter and knowledge exchange. Professionalism means little to Hiwa K; his emphasis is on social equality. Launched in 2010, his project CHICAGO BOYS WHILE WE WERE SINGING THEY WERE DREAMING, a “1970s Middle-East pop-music revival band and neoliberal study group” – it is named after the Chicago school, an influential source of economic-liberal ideology – features a constantly changing cast of participants who use music and personal stories to describe the neoliberal transformation of the Middle East that began in the 1970s. Leadership, musical talent, and effective performance skills are not part of their stage repertoire; uncoerced cooperation is.

Commissioned by the Serpentine Gallery in 2010 Hiwa K planned to organize Chicago Boys concert at Speakers’ Corner in London’s Hyde Park, which has been a public free-speech zone since 1872. Today’s speakers usually bring stepladders to exercise their right to the free expression of their views from an elevated standpoint. Yet the cherished tradition did not originate as a privilege: a gallows had stood nearby since the twelfth century, and many of those who were executed there, often regime critics, used their last minutes to address anyone who would listen, speaking their minds without fear of repercussions. Hiwa K titled his action IT’S SPRING AND THE WEATHER IS GREAT SO LET’S CLOSE ALL OBJECT MATTERS, a riposte to a line in a song from the 1970s in which the Egyptian poet, revolutionary, and patriot Salah Jahin ironically characterized Anwar Sadat’s strategy of rapprochement with the West, which paved the way for the economic Americanization of the Orient and stifled alternative leftist political projects, as a fair-weather policy. Hiwa K hoped to reopen the debate with his event at Speakers’ Corner.


He designed seven stepladders equipped with microphones and musical instruments the performers would build together and bring along to stand upon. After the concert had to be canceled, he eventually decided to reconstruct the projected stepladder ensemble at the Serpentine Gallery. Highlighting how the artist continually renegotiates the tensions between the performative and material dimensions of his art, the installation also brings out the possibilities implicit in the friction between collective events and individual voices, of which Hiwa K’s own is merely one. His horizontal conception of the social allows him to unlock the creative potential of these tensions, inquiring into alternatives to an understanding of authorship predicated on the distinctions between experts and amateurs, between artist subjects and non-artist subjects. He ultimately advocates an egalitarian social model that jettisons exclusion and vertical hierarchies in favor of solidarity. On occasion of Hiwa K’s first solo exhibition in Germany, we present the London installation in our upstairs gallery, where the Chicago Boys had one of their first performances in 2010. In 2017 Hiwa K will participate in documenta 14.