The Other, The Same 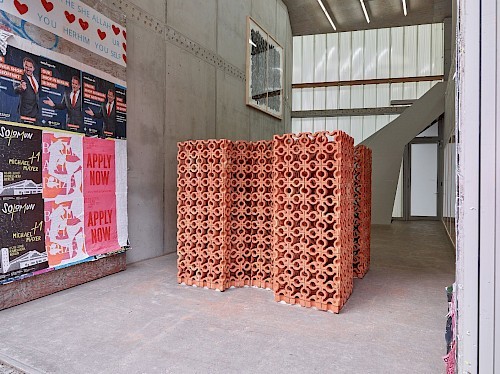 Installation view
LOS CARPINTEROS
The Other, The Same
28 April – 21 July 2018

The social utopias of the nineteenth and twentieth centuries have not become reality, but they have not failed, either. They have been bent out of shape, which opens the prospect that they could be bent back. Since 1992, Los Carpinteros—Dagoberto Rodríguez Sánchez and Marco Antonio Castillo Valdes—have made art that registers the changes in Cuban society: the disappointment and frustration that the fresh start into a life of greater solidarity has come to naught. Yet their oeuvre preserves that original impulse and deliberates its forms.
Los Carpinteros are the chroniclers of a socialist deformation who also point out that it remains to be seen where history will lead. This, their first solo exhibition in a German gallery, was produced in Havana and Madrid over the past several months. It assembles three recent films, a major sculpture, and new watercolors. Let’s start with the films, on view in the gallery’s basement space.

A slaughterhouse: Goats’ throats are slashed, the floor is flooded with blood, piles of steaming entrails sit in garbage cans. Carcasses are hoisted away, then the cleaners move in. The group gathers and a man steps up to deliver a speech. By its end, he will have ruined himself and destroyed his listeners’ trust. Retráctil (2018) retells a turning point in Cuban history, transplanting it into a different setting. In 1971, the secret service pressured the influential poet and critical intellectual Heberto Padilla into making a false confession and denouncing his own ideas. His humiliation and subsequent arrest led many intellectuals to lose faith in the revolution and break solidarity with the Castro regime. Employing a brilliant black-and-white aesthetic, Los Carpinteros reenact Padilla’s forced self-incrimination—the recording has never been made public—as a purge of undesirable elements to recapitulate the resulting shock it meant for the evolution of Cuban society.

Comodato (2018) is a voyage of observation through the scenes of Cubans’ private lives. An unbroken shot passes through the thirteen rooms of one house. Sumptuous interiors decked out in the accoutrements of wealth give way to more modest and finally humble dwellings. The shift from the living conditions at the top end of Cuba’s social scale to those at the bottom is so gradual as to be almost imperceptible, until the discrepancy becomes increasingly unmistakable. The film refutes the myth that Cuban society knows no class distinctions—and yet its story is not one of division into rich and poor. It is all too conspicuous that each interior is the other’s equal in its distinctive dignity and beauty; the ways in which people make themselves at home are too similar; the continuity of a social sphere with its rising and declining resources too salient in this one environment. Pellejo (2013) is a similar stretch of physically impossible filmic continuity. A simple interior furnished with hardly more than a bed is where life, as sex, plays out. During the intimate act, the lovers age by years and decades. Time passes, has already passed, in desire, in touch, in the couple whose future lies in the past, in the blink of an eye.

On the gallery’s ground floor, an architecture of Moroccan-made clay tiles is as plausible and artful as it is without function. Celosía Copta (2018) hints at a core idea underlying Los Carpinteros’ oeuvre. The two artists and their circle of collaborators and assistants work under the moniker “The Carpenters” for good reason; the label emphasizes manual craftsmanship, signaling their rejection of the lofty idea of creation associated with other conceptions of what artists do. It also aligns their work with a tradition of experience—in existing socialism and beyond—in which one makes with one’s own hands what one cannot buy for money. Skilled manual labor is a means of production in the hands of the many, whether they pitch in out of solidarity or economic deprivation. The group’s pseudonym is a programmatic reminder that social reality is a material process; visions of a different society are a matter of doing, rather than of pure imagination. The tiles as a universal building staple exemplify the idea of construction in Los Carpinteros’ art, highlighting the work of creative social and material-making that remains to be done.

It may be noted that this implies deliberate opposition to the Duchampian readymade, that work-idea straight off well-stocked department-store shelves on which the inventory is not just always already ready-to-use but, more importantly, devoid of all potential for change.
We do not fuss with or modify readymades. They embody a determinism of immutability. The 15-foot-wide watercolor Ceiba I (2018), too, gets its iconography from the capitalist supermarket shelf, but the product of choice is one whose purport and function is perpetual transformation: Lego bricks. In the depiction, they model one of the numerous new school buildings built in rural Cuba in the 1970s and 1980s—the places where the socialist community would be forged. Many of them are now empty ruins, monuments to the failed dream of education for everyone. Transposed into a Lego world, however, the structure remains an object of play; the egalitarian vision is a project capable of being remodeled, since all building blocks in play can still be moved around.

Forms of progressive modernist Cuban public architecture are a constant in Los Carpinteros’ oeuvre. In watercolors such as Espuma Cúbica cuatro, Díptico (2016), they return as fantastic creations; unburdened by any intended use or the physical realities of construction, functionally and materially weightless, they look like the spaceships of a futuristic art of engineering. These are not blueprints for an architectural vision but rather embody the visionary principle itself. And yet the utopia in the picture speaks in the language of the feasible. Brick was set upon brick, brushstroke upon brushstroke. In this image, the built world is will and imaginative presentation minus all the good as well as contrived reasons why it is supposedly impossible.

And then, finally, a square of black beans, Gran cuadrado de frijoles negros (2017). Kazimir Malevich famously thought of his 1915 Black Square on a white background as the utopian cornerstone of a revolutionary social order. But the revolutions’ grand formulas brought neither Russia nor Cuba any luck. Los Carpinteros transplant Malevich’s modernist icon back from abstraction into the stuff of which actual living conditions are made. Black beans and rice—the national dish of basic needs tops the menu of everyday Cuban life. It is with this reality, rather than with abstract promises, that the construction of a better and more equal life begins, as Los Carpinteros’ art, abstaining from all pathos and illusionism, reminds us.