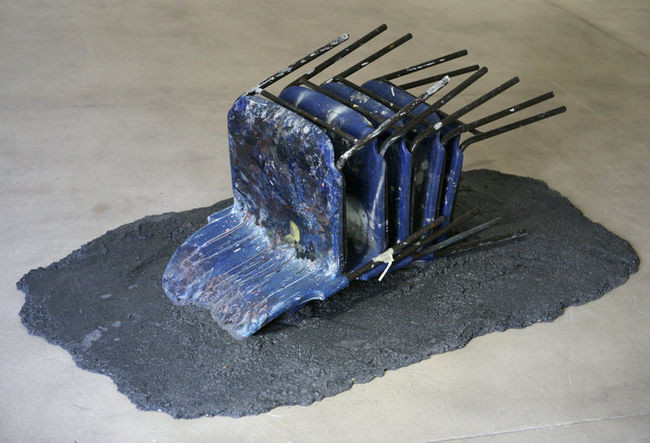 Tenacity is the word that best describes Angela de la Cruz. 24 years ago she left her native Galicia after studying philosophy, and went to London to pursue her career at Goldsmiths College. At that time she was influenced by artists such as Robert Ryman, Barnett Newman and Donald Judd...At that moment she realized that to question the pictorial language, you need to dominate it first.
Angela de la Cruz interests me because she is "unclassifiable” in terms of her artistic production. One must not lose sight of the fact of this adjective when referring to her art. It means that Angela’s work is innovative, ground-breaking, and therefore difficult to be assimilated by any pre-existing movement.
Her work is essentially set on a fence.
Constantin Brancusi took fine sculpture down off its pedestal’. When French artists of the Support Surface Movement eliminated the frame and the stretcher by hammering the canvas directly on the wall, spreading it out on the floor or twisting it over itself, they managed to make disappear the distance between the medium and the pictorial surface. At the same time, artists like Lucio Fontana, who perforated pictorial layers, or Ellsworth Kelly, Kenneth Noland or the American artist Franck Stella, made their artwork have a sculpture-like appearance, by accumulating various levels of stretchers. They managed to model paintings into a sculptural shape. The works by Angela de la Cruz are also, from their genesis, a perfect synthesis between painting and sculpture.
Precisely for what I have just stated, it is very difficult to classify this work among the multiple artistic movements it resembles. De la Cruz has also inherited her main components from Color Field painting: the expansion of color, the treatment of the canvas -as if it were a piece of cloth-, and her lack of interest in pictorial gesture. She has also borrowed the raw material from the objet-trouvé and junk-sculpture movements, as we can see in her works composed by the accumulation of used furniture –Still Life (Table), 2000, her series Clutter, shown in this gallery in 2003, or her sculptures Flood, present in this exhibition.
Her pieces are formally classical, ‘painting-painting’, but their material resolution is half-way between painting, sculpture, and installation. She applies a meticulous and luxurious treatment of the pictorial surface and, as you can see, there is not even a centimeter of canvas that doesn’t receive the attention it deserves. This perfectionist process sometimes contrasts with the rather neglected and rough appearance of the final result, especially in her sculptures.
How can her artwork be one thing and the opposite at the same time? How can it be both a painting and a sculpture? That is where the fascination for Angela de la Cruz comes from.
In 1996, she broke a painting for the first time. She named it Homeless and put it in the corner of the gallery and used floor, wall and space as a unit.
Then she started to ‘deconstruct’ some of her paintings -usually monochromes– making them acquire an object-like status, almost a sculptural nature. From there we can find duplicated stretchers, stuck into one another, broken in two pieces, folded over themselves or dislocated from their margins. They abandon their frontal two-dimensional nature and become a sculpture in the corner of the room.

If we add to this process the suggestive titles she uses to baptize her works, we find that they discharge a message that usually produces an emotional reaction in the audience. With the titles, Angela’s works suffer a process of personalization becoming ‘passive subjects’ of different acts such as: Ashamed; A broken painting making a reverence; Homeless; Knackered; Ripped or, like in this show, the pieces Battered or Bloated. Sometimes I think that her pieces have a soul.
The works that she is presenting here in Viena are dark, dirty and look wet. She said about them: “I have chosen to work in Mud colors, because they are very close to the dirty water, which always interests me. Wet is also about the people being wet, which in English also means to be thick and slow. Wet also has a sexual connotation, which I quite like. So you could read Wet in a sexual way. Rolling in mud and dirt can be exciting and arousing”.
It is quite curious. In a interview that she did with the curator Carolina Grau for the exhibition I have curated at the Museum of Contemporary art in Vigo, in 2004, she said: “In my first pieces I used materials which would give a more brutal and scatological appearance, as I spent much time thinking about the abject context of things. My latest works are fetishes, perfect, shiny, wanting to give the impression of being just finished and wet. I suppose they also have a sexual side to them".
As you may know, to produce some of this paintings like "Wet painting”, they had been immersed in water for a long time, and they show the trace of water.
As we can conclude, dirty aspect, wet looks, and sex references are three concepts that have always been on Angela’s works.
She had also worked with furniture. In her series Clutter, she had two pieces made with wardrobes, Clutter with Wardrobes 1 and 11. In the first piece she put three wardrobes each one inside the other, and in the second piece she piled three wardrobes up against the wall. For this new show she has chosen the chair in Flood. She wants to symbolize through it the absence of a body and, at the same time, she uses the chair to reflect life size and to remember real situations.
Nevertheless, in both cases, the primary function of those objects had ceased and, also the size of the objects has been determinant to be chosen.
She selected the chair because it implies a presence of the people sitting on them and that gives a domestic scale to the piece. Some years before, she chose the wardrobes because they had the same height as her (1.53 meters). Today the sculptures that you see in this exhibition is 123 cm high, which is the same height as Angela sitting in her wheelchair. In Angela’s works, size does matter.
In any case, both are figurative sculptures shown in an abstract way, like many of her paintings.
As she says, this exhibition is about survival and what remains after a disaster. She has many other victories on her credit, for the enjoyment of her family and many fans. There is still much to come for this unique and tenacious artist.