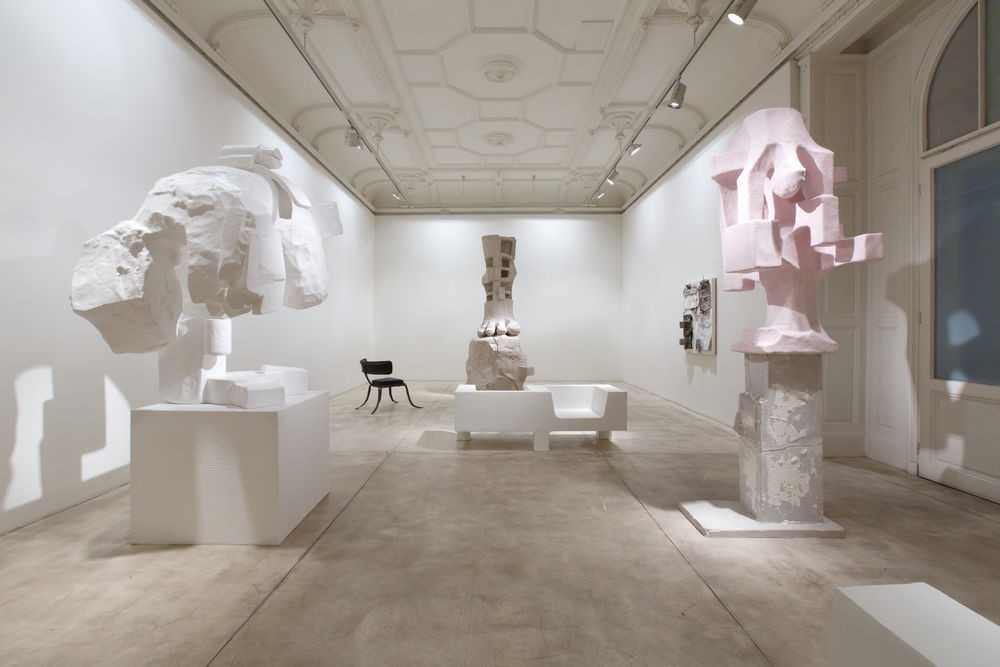 Der Hausfreund is your most ambiguous friend. Like the postman, he comes around all too often, especially when you yourself are not around. A friend of different faces and functions – just like the multifaceted artworks of Dutch sculptor Joep van Lieshout at Galerie Krinzinger. Mimicking a domestic setting, the gallery shows a selection of Van Lieshout’s recent artworks, which ask questions about destruction and renewal, coincidence and concept, minimalism and functionality.

In his sculptures, Van Lieshout explores the boundaries of both ethics and art. His sculptures enter into a discourse with functionality, with form and its language, questioning the position of the artist. He has a fascination for the power that objects, machines and systems wield over humanity, and the (ir)relevance of the individual in the face of this power. Over the past three decades, Van Lieshout has established an oeuvre that explores the borders between sculpture, functional art and architecture, creating objects and installations, buildings and furniture, utopias and dystopias. In his early works, he set out to investigate the thin line between high art and mass-produced functional object, with series like Untitled “Beer Crates” (1987-1988), Hard Edge furniture (1989-1990) and Soft Edge furniture (1990-1995). A strong sense of coincidence, minimalism and nihilism pervades these artworks, paired with a strong focus on efficiency, on the process, on the concept. These works were followed by the Mobile Homes, which not only focused on the nature of art and the position of the artist, but also touched on the position of the individual within society, and on ways to exist outside the system. This concept was taken even further in the project AVL-Ville (2001), where Van Lieshout declared a free state in the port of Rotterdam with a minimum of rules, a maximum of liberties, and the highest degree of autarky.

In his latest body of work, CryptoFuturism (2015-ongoing), Van Lieshout turns his view again at systems. He revisits the Italian Futurists a century later to look at resonances between emerging Fascist tendencies today, using his art to reveal the interplay between Utopia and destruction. Van Lieshout embraces emerging technologies from genetic manipulation to artificial intelligence and big data to draw parallels between the societal threats of the early 20th century and the perhaps graver circumstances we face today.

The exhibition Der Hausfreund at Galerie Krinzinger shows a selection of works from CryptoFuturism series. This selection comprises sculptural pieces that symbolise the search for new guidance, referring to statues of leaders, emperors and deities – to eras when society was personified by a single individual or god. These are paired with artworks that symbolize the struggle between material and machine, between man and machine, works that were created in an accidental and violent way, like the Hydroform sculptures. As part of CryptoFuturism, Van Lieshout has built a series of huge machines in order to destroy or recycle all possible materials. These machines were subsequently used to create sculptures by applying high pressure to both prepared materials and everyday objects, by exploring the limitations of the material, subjecting them to violence and chance.

These artworks are juxtaposed with the Flatpack series, in which Van Lieshout has reached a full circle. The Flatpack works show a return to the themes which were prevalent in his earliest works. Like its predecessors – the Untitled “Beer Crates”, Hard Edge and Soft Edge furniture series, the Mobile Homes and the Free State of AVL-Ville – Flatpack takes minimalism and modularity as its conceptual starting point, and gives it an ironic twist. It pairs the economic models underlying the production of cheap contemporary furniture to maximal, heavy brutalist aesthetics. Easy assembly with a user-friendly manual is out of the question here.

Joep van Lieshout (born in Ravenstein in 1963), lives and works in Rotterdam, the Netherlands. In 1995 he established Atelier Van Lieshout, a multidisciplinary studio in the field of contemporary art, design, and architecture.
www.galerie-krinzinger.at