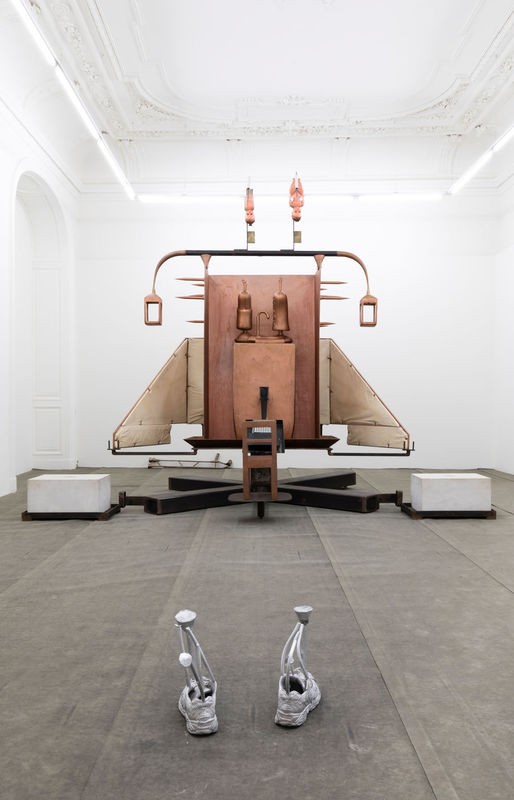 As early as 1972, Galerie Krinzinger devoted an entire exhibition to Bruno Gironcoli; in recent years it has focused on presenting the artist’s early oeuvre (1960–1980) in exhibitions and fairs. Thanks to the juxtaposition with works by his student Hans Schabus, the topicality of Bruno Gironcoli’s production for the younger generation of artists becomes evident. Gironcoli’s insistence on a notion of craftsmanship for sculpture and his differentiated approach to the subject of material are still highly relevant today. Hans Schabus is one of the most versatile artists of his generation. His spectacular design of the Austrian Pavilion at the 51st Biennale di Venezia in 2005 drew a great deal of attention. Schabus used wood to construct a mountain, which the visitor could enter. This mountain almost completely enclosed the pavilion and was furnished on the inside with an almost labyrinthine system of staircases. One of the artist’s basic principles that this piece, in particular, reflects is the spatial and contextually manifold reversal of given conditions. Hans Schabus analyses and dissects existing spaces in his work so as to reveal the structures, material and forces governing them. By investigating spaces and their constellations and subjecting them to an in-depth analysis he creates unexpected reconfigurations and deconstructions. His sculptural material, in addition to space and its context, is further enriched by movement, out of which the artist’s complex installations emerge.

In “NÄCHSTE TÜRE LÄUTEN! (ring the bell next door)“ Schabus transforms the Showroom of Galerie Krinzinger into a self-contained spatial situation. The floor of the gallery is clad with roofing tar board, the doors closed so that a separate universe emerges. In addition to the spatial intervention, two sculptures by Schabus will be shown – objects that recall familiar items from everyday life, now alienated by the artist in an approach that resembles the way Beuys charged materials with certain meanings. The latter was an important influence for his counterpart Bruno Gironcoli. For example the work “Steinsaal” (1996–2018), that was exhibited during Bruno Gironcolis professorship at the Academy of Fine Arts Vienna or the aluminium sculpture “Lichtblau” (2017), that outlines an absent person.

For the joint presentation, Hans Schabus selected a piece by Bruno Gironcoli which evolved over a period of more than ten years (1968–1977) and was reworked several times. In contrast to these pieces, Gironcoli plays very explicitly with the extension and cooptation of space, alluding to his work with “electrification”. Here heterogeneous materials such as aluminum, barbed wire, plexi-glass, fabric, marble, steel and audiotape with an announcement of time are used. The idea of the open sculpture, which Gironcoli developed and elaborated artistically with the greatest consistency over time gave way, in the 1980s, to an extreme concentration of his objects. „Xinox“ marks the end of the development of Gironcoli’s installation pieces but it is also here that the great sea change in Gironcoli’s work began with his shift to the large-format pieces.
“Xinox” thus has a special position in his oeuvre since apart from the heterogeneity of the material he once again explicitly uses sound tape, referring to the performative aspect of his earlier works.

What both artists, Bruno Gironcoli and Hans Schabus, share is their great precision, their radical approach which is reflected in the cooptation of space, a preoccupation with volumes and the treatment of material and objects which facilitates a reflection that is both subjective and abstract.

Quote Hans Schabus: “I also think that places of art have become showcases, shop windows and tableaus - These places are also containers for history(stories). In this sense the secrets of these places interest me. Of course a place also always refers to an outside, another place: this one from which I’m just coming or one to which I would then go. And thus a kind of in-between space emerges. I can also imagine and take this in-between space everywhere else. And thus a certain place becomes charged again in a different way. In this way I can generate a different content and interpret the place which also always has to do with a new expression of one’s own scope.”
From: (Zwischenraum) Wenn das Fehlende zum Eigentlichen wird, interview with Kathrin Rhomberg, in: Petra Reichensperger (ed.), Begriffe des Ausstellens (von A bis Z), 2013, pp.184–189, p.186

Quote Bruno Gironcoli: “The anachronism of the make, the workmanship of sculpture is actually its fragile response. In contrast to the only conceived conceptual art such work is made of thinking and feeling in a practical, hands-on sense”... “in the additional process of the static make of something emerging and the in the attempt to bring this to the idea in doing justice to the material and again something handcrafted, conflict emerges.” ...”Sculpture thus emerges in the continuous switching back and forth from material adequacy to idea and vice versa. Content emerges, it is silent, sculptural work piece.”
From: Bruno Gironcoli, Überlegungen zur einer konventionellen Kunstform Bildhauerei, in: Bruno Gironcoli, Die Skulpturen, 1956–2008, Bettina M. Busse, HG, p.180

Hans Schabus (born 1970 in Watschnig, Austria) lives and works in Vienna. 1991–1996 studied at the Academy of Fine Arts Vienna, since 2014 professor of sculpture and spatial design at the University of Applied Arts Vienna.

Bruno Gironcoli (born 1936 in Villach, Austria, † 19 February 2010 in Vienna ) 1951–1956 apprenticeship as gold and silver smith in a metal-processing company in Innsbruck; from 1957 studied painting at the University of Applied Arts Vienna under Professor Eduard Bäumer; in 1977 Bruno Grioncoli succeeded Fritz Wotruba as the head of the school of sculpture at the Academy of Fine Arts Vienna;
www.galerie-krinzinger.at