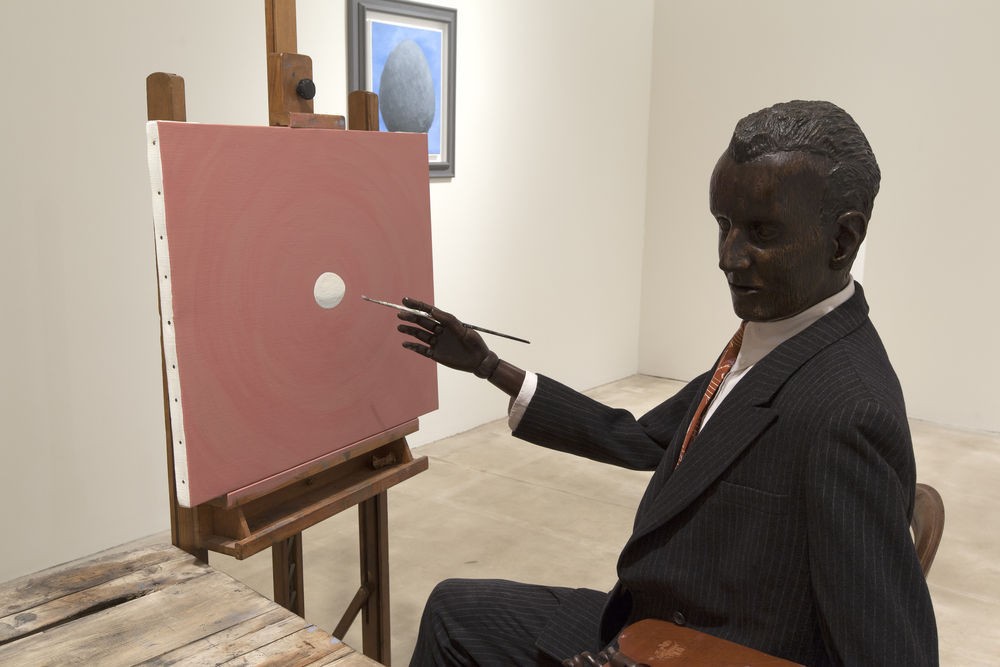 This curious show, coming 16 years after Turk first showed in Galerie Krinzinger with ‘The Importance of Being Ernesto’, is a musing response to the Bohemian patrician creativity emanating from post-first-world-war Vienna. This spawned the Secession era with the sumptuous portraits of Klimt and his protégé, the awkward permissive Schiele, the radical dissonant, anti-decadent modernity of Schoenberg and Loos and significantly the enlightened ideas of Ludwig Wittgenstein and Sigmund Freud.

Fast forward to the 21st century and we as humans need to use all our ingenuity and intelligence to prevent the inevitable consequences of increasing populations and our manic exploitation of the earth’s resources. But as Freud so perceptively pointed out the ID and the Ego subsume the wisdom of our higher thinking selves. This contemplative exhibition plays with these near-redundant has-been titans and their parvenu ancestors – a pause for thought. The Kosuthian clock mobile slowly spins as it ticks through our inheritance of the earth.

“Nothing is so difficult as not deceiving oneself.” (Ludwig Wittgenstein Culture and Value, 1980 p. 34)

Like all serious philosophers the artist deploys humour and a linguistic lightness to address the profound dilemmas of our age. The painfully handmade rhomboid rocks lying testament to the continued industriousness of Man aspiring to the insouciant melancholia of Her. All the time observing the observing eye - watching you, watching me.

Swept up by the complexity and uncertainty of our contemporary times, we are easily seduced by the concept that simple logic can make clear all meaning. That science can make sense of our secular world. But instead simple ideas become the storytelling narratives of capitalist marketing not of philosophical rationalism.

Through the filter of the post-everything, all-knowing western lens, the lone figure on the institutional carpet cuts a sorry, even comical, figure. The sculptural marionette of Ludwig Wittgenstein offering forth an egg, where 16 years previously a waxen-faced doppleganger of Che Guevara had stood clutching a gun, brings a pathos to the now effete role of the contemporary western male revolutionary thinker.

The once authoritative figure, is now made impotent in the virile presence of our rampant consumerist hedonism. This symbol of rational thought, whose classmate was once Adolf Hitler, is left clutching nothing but the semiotics of philosophical oxymorons, conundrums and lost enigmas.

The subtleties of thought, philosophy and the investigation of ideas, as foretold by the Orwellian prophecy, are now made powerless by the machinations of post industrial Double Think. The ruthless game of art capitalism absorbs the power and energy of expression and renders ineffectual the artist’s ability to disturb our human conscience. But on Wittgenstein’s If objects gain symbolic powers, can the object be represented and put back in front of the audience in such a way that the process of acquiring value and meaning may be exposed? This is not to nullify meaning or symbolic power but to try to wrestle it free from the cliché of ‘established thought’. Gavin Turk

“A serious and good philosophical work could be written consisting entirely of jokes.” Ludwig Wittgenstein (Henry Dribble, View from the Asylum, in Philosophical Investigations from the Sanctity of the Press, 2004, p. 87)