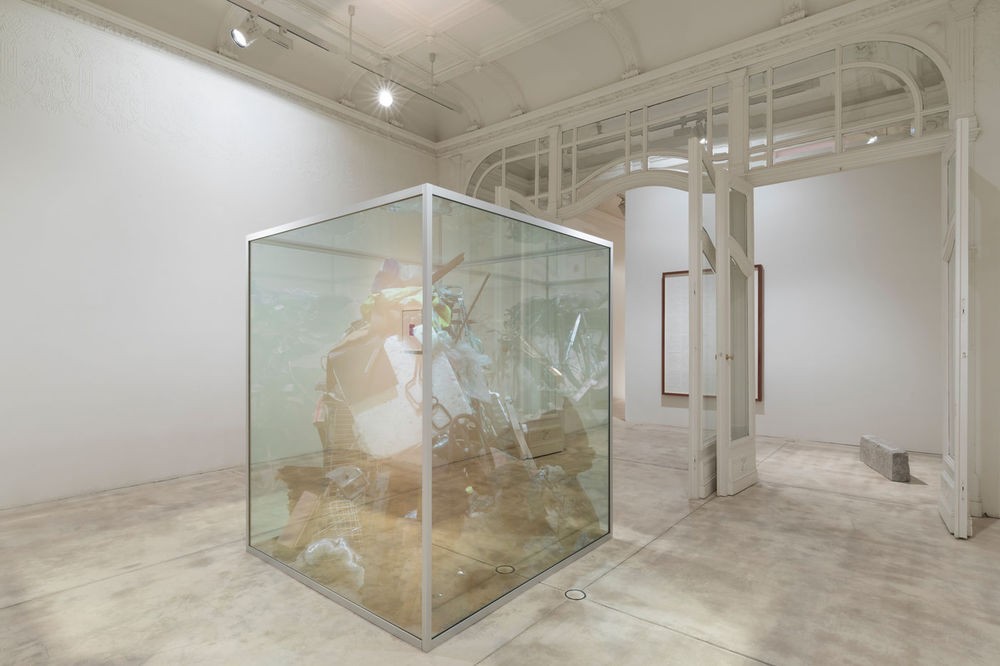 The search for meaning in these volatile times leads to a musing on meaning itself. In the horrible Newspeak of our Trumpian times the post-truth, fake-news generation questions everything in a spiralling descent into confusion. How to be a man (or a woman) in a feminist patriarchy? What is the meaning of freedom? Since Late Capitalism is selling the avant-garde as another marketable product, is there a way out of this self-destructive system? Is belief in equality and a sustainable world just another religious dogma? Is our extreme consumption like an Ancient Roman bulimia - making us vomit: so we can gorge on even more. How can we see that the concrete wall is a political metaphor, a brutalist symbol for the compartmentalisation of reality. I don’t want to look at that - so I will put it through the other side of my metaphysical turnstile...click, click, click (Deborah Curtis)

British born Gavin Turk is well known as the mercurial art surrealist, lightly nimble-stepping through his art historical references to inspire a second look and a quizzical frown. His work skips from cultural identity to surrealism often using visual illusions and poetic enigmas to capture the imagination. Gavin Turk’s 6th solo exhibition at Galerie Krinzinger presents rubbish as art. And art as a system of social control.

At the same time, it quietly celebrates the charm of the irrelevant and the discarded whilst challenging the shifting reality of our contemporary thought. An alternative articulation of Descartes legendary philosophical utterance - I doubt, therefore I think, therefore I am - echoes through the exhibition space.

In the first room on the left, when entering we are confronted by the magical illusion of a Magrittian gateway. This time an ominous wormhole controlled by a playfully bureaucratic ticketing system. A crowd controller for gaining entry, but from where to where?

Deftly framed snapshots show the insanity of our digital age. With more photographs being captured by more people on this day than at any time throughout history, these are the mistakes, the errors, the digital blurs of a badly held phone camera. The nauseating excess of our semi cyborg generation. But wait a minute for the images to grow meaning and remind us of a half thought. They beguile us, musing on the edge as our minds struggle to grip hold of our reality: with the charm of the unknowable.

The oval room is a whimsical study of lexical and visual semantics. The eponymous canvases entitled Legend and God is Gone are a pair of Trompe l’Oeil conundrums. These religious tablets could be a post apocalyptic view of our lost generation. Or are they no more than a child’s Sunday school flash cards: humorous instructions to read and remember to think. The Moment epitomises the ephemeral nature of our age chiselled into a granite paving slab: a biblical reckoning from the divine being reminding us of our brief life and the permanent damage we can inflict. Another work Waterfall is a hand-drawn palimpsest - a human mimicking the computer, rather than the other way around. These are the crazed digits, symbols and cyphers spat from a printer whilst attempting to produce an image of Duchamp’s Waterfall. The scatological fascination of our dysfunctional technologies to be deciphered by an ancestor looking back on the insane speed of progress. In the rooms to the right we find shrines to our wasteful excess with contents collected from the yard at the back of the Artist’s studio. Agglomerations, clumps and assemblages of cultural waste. The futuristic museum plinths are displayed like sterile sci-fi capsules containing the grubby evidence of our profligacy. With names like PSION and VXACT suggesting a medical or scientific purpose, the planks lean against the gallery walls alluding to the language of an ancient or future tribe to whom our excreted waste would seem sacred.