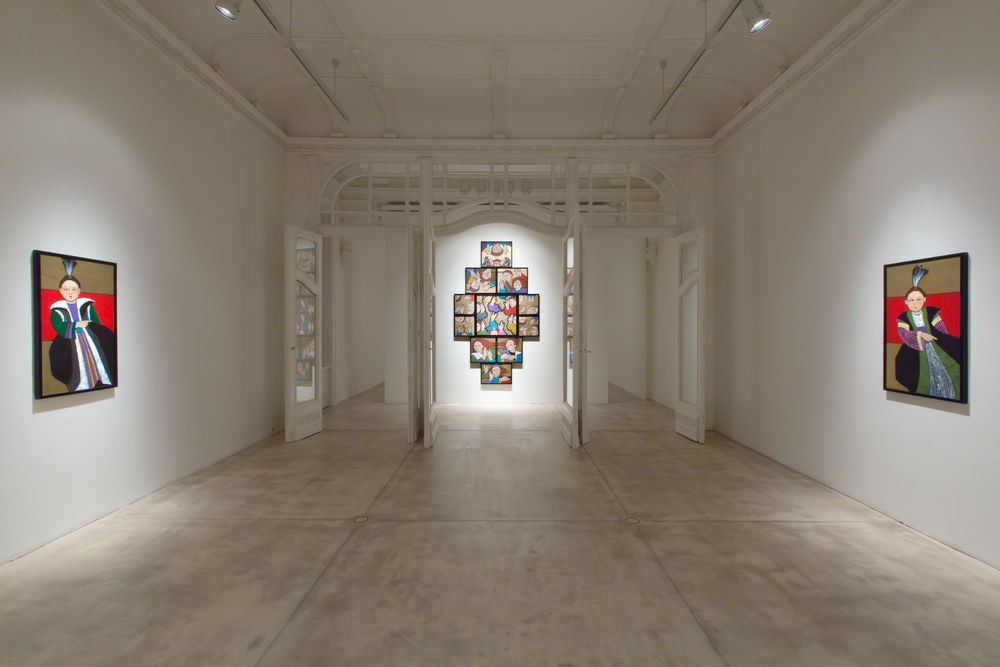 In her first show at Galerie Krinzinger the Turkish artist Gülsün Karamustafa is combining her series of non-religious icons – the Promised Paintings, the installation Swaddling the baby, a selection of under-glass paintings as well as the films “Insomniambule” and “The City and the secret Panther Fashion”.

Istanbul’s complex history, its complexity and the byzantine pictural language always fascinated Gülsün Karamustafa. The Promised Paintings show a reinvention of the idea of the icon painter, who used to operate as the hand of good, also in his own self-conception. Karamustafa is employing the aesthetics of the byzantine icons but breaking with the strict schemata. “An icon maker is only the hand of ‘god’ and as such never has the initiative to paint as him/herself. Promised Paintings gave me a very special kind of freedom and became an inventive game for me as I never wished to obey the rules of ‘peinture’ that were thoroughly imposed by the art milieu in the 1980s.”

Filippo Brunelleschi’s Ospedale degli Innocenti in Florence with the reliefs by Andrea della Robbia showing swaddled babies are fascinating Gülsün Karamustafa since her first visit as a student in 1969. “Children are the feeblest of all humankind especially during times of war, great disasters, flows of migration and diasporas. My project is related to the destiny of the ‘innocents’ who had the chance to survive those unsparing moments of life. When I went through the images related to the orphanages as a whole I was more interested in the ‘faces and the looks in the eyes of children’. It was a pathway that gave me a deeper insight look of how it would feel like an orphan in an utmost crucial times in history.”

Her fascination for those innocent children born into unbearable situations, but taken care of in this orphanage, is captured in the installation Swaddling the baby, first shown at the Villa Romana in Florence in 2015.

Another series of works that will be shown are under-glass paintings referring to the ones popular especially in Turkish coffeehouses, confectioners, butcheries and barbershops of the 19th and early 20th century. In form of seriographic prints mixed with paper collages containing book and magazine covers from the second decade of the 20th century.

The films Insomniambule and The City and the Secret Panther Fashion are shown in the Galerie im Parterre. In Insomniambule, Somnambule the sleepwalker and Insomniac as a symbol of constant consciousness are letting us follow them through their night. Although their initial situations are diverse they share the desire to fight the sleep as such.

Following each other in their restless wonder through the night they are subconsciously playing several games that lead them through their personal past and present. “The City and the secret Panther Fashion” is one of Gülsün Karamustafa’s projects that deal with the apprehended role of women. Furthermore Karamustafa also refers it to her early works from the 1980s, during a period in which she was dealing with flows of immigration from the countryside to the big cities. “ I made use of leopard skin patterns because this type of fabric seemed to express the growing desire for ‘kitsch’ at this time due to social and economical conditions.”

Gülsün Karamustafa was born in 1946 in Ankara, Turkey. She lives and works in Istanbul.
www.galerie-krinzinger.at