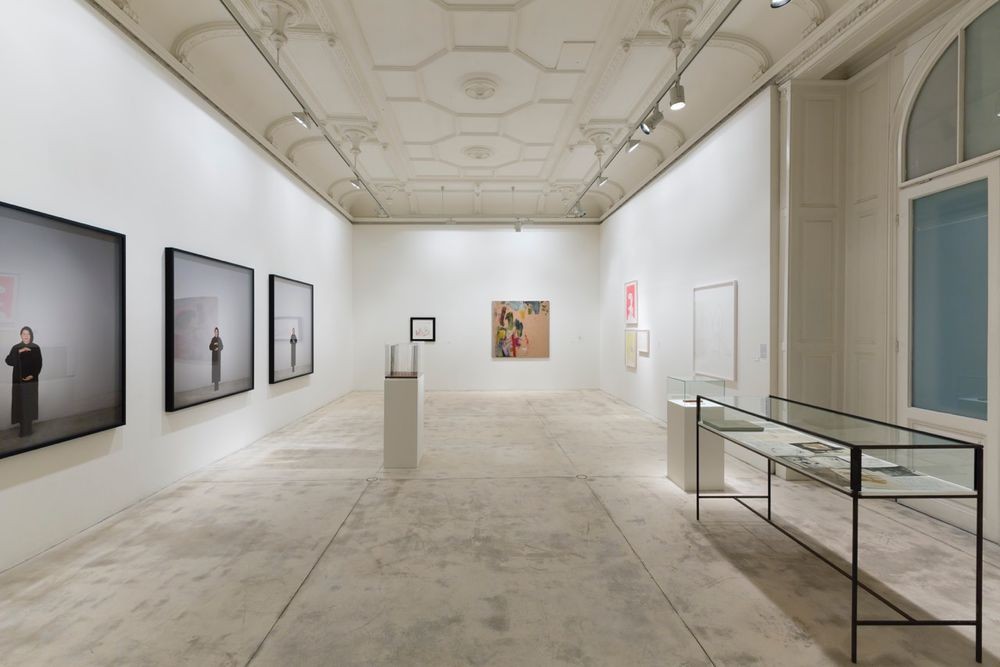 
For the “ICON” exhibition project artists of the Galerie Krinzinger in Vienna have been invited to present their own ICON. ICONs can be artistic positions that have influenced them or other artists who served as role models for them or even works which the artists featured here have strongly engaged with in a certain phase of their artistic development.

Literally, the word ICON means both symbol or sign but it can also refer to a symbolic and cultic image that is la- den with meaning. It can also be recognized again in other contexts as a reference or kind of archetype. This means that we are dealing with a highly complex notion here. Also metaphorically, on an artistic level, it is certainly a complex phenomenon. What an artist calls his or her ICON reveals a part of the inspiration process, opening up new per- spectives of his or her own work.

Contemporary art makes use of a multi-layered reference system, which includes quotes and variations, appropriations, adaptations and sampling but also references to (historical) models, overpaintings, etc. Artists restage, juxtapose, systematize or even iconize. The deliberate reference to other artists or to artistic epochs has become a common approach//working method. Starting with romanticism, a new image of the artist began to emerge. Now the artist was seen as a genius who was able, from within the depths of his or her own being to create artworks as masterpieces in their own right unaffected by the surrounding world. From here on, innovation and originality come to the fore as important parameters for assessing artworks. This position spurred a distancing from and a break with earlier artistic traditions, paving the way for radical innovations and aesthetic revolutions in modern art. This so called ‘originality imperative’, however, did not mean that there was no more recourse to art historical models, that this was now strictly avoided. To be sure, the motivation for engaging with models of the past had become different. The precursors of the contemporary approach to ICONS are certainly Marcel Duchamp and Andy Warhol. Today, as then, a reference to another art- work or artist is a deliberate act, an individual decision and there are manifold factors motivating this. The “ICON” exhibition features 38 works that span a wide range of artistic production. With the exception of Gavin Turk who by inviting Joseph Kosuth, an artist who is a personal friend and someone he has exhibited with, none of the invited artists selected an ICON from their immediate vicinity. Generally, the artists drew inspiration not from the generation of their teachers but rather from the generation of their grandparents.

The selection made by nineteen artists reflects a specific realm of art development in the 20th and 21st century. In some cases, the artist adopted a very sweeping approach. Chinese artist Zhang Ding, for example, did not select one figure, but rather an entire art movement of the 1960s “Fluxus” which left a sustained imprint on his own work.

Mark Wallinger, by contrast, took the British draftsman and graphic designer Harry Beck as his icon. Beck is best known for the network plan that he created of the London Underground.

In selecting their ICONS, the artists employed very different criteria and methods. Marina Abramovic, Gottfried Bechtoldt and Goran Petercol, for instance, selected classics as models. Abramovic opted for John Cage, an artist who by including the element of chance in the creative process exerted a lasting influence on her generation of performance artists. Goran Petercol’s selection of the best known Croation avantgarde artist Julije Knifer adds an important position of the East European modernism to the exhibition. With Marcel Duchamp Gottfried Bechtold selected the “inventor of contemporary art” (to quote Bechtold) as his icon.

Thomas Zipp and Angelika Krinzinger cite classics of photography as their models. Zipp selected Eadweard Muybridge whose movement studies exerted a strong influence on modern art (certainly the best-known movement study is Marcel Duchamp’s 1912 “nude descending a staircase”). Thomas Zipp, too, works with a kind of grid in his pictures for measurements that allude to the possibility of depicting sequences in the static medium of painting, creating a reference to his performances. Angelika Krinzinger, by contrast, refers in her selection to the rayogram technique introduced by Man Ray, which she interprets in a contemporary way in her “Spoons” series. Both Gavin Turk and Erik van Lieshout integrate their ICONS directly in their work, albeit in a different way. Gavin Turk and Joseph Kosuth decided together on the selection of works that they are presenting in the exhibition. Gavin Turk’s artistic oeuvre addresses subjects such as authenticity and identity and responds to the avantgarde debates on the myth of the artist and the originality of an artwork. His reference to the works of Joseph Kosuth who is seen as one of the main representatives of concept art who in 1965 created a veritable classic with his “One and Three Chairs” and the fact that the latter is “confronted” with this fact, generates a new metalevel of reciprocal reflections.

Erik van Lieshout actually integrates Allan Sekula’s works in his piece by creating collages with own drawings and photographs by Sekula that are both shown on a display. With his works that also testify to the demise of the maritime proletariat in the shipyards of Danzig and Los Angeles, Sekula ushered in an innovation in documentary photography in the 1970s.

Martin Walde happened to meet the American Paul Thek at the “Chambres d’amis” exhibition which took place in Ghent in 1986. Referring to Thek, he states: Things, materials, fragments come together in his works and become arranged in reconstructions of a world in which time, space and functions show no ordinary collective consensus.” What drew Walde to Thek’s works was their emphasis on processuality and the extremes that are characteristic of the American artist’s oeuvre.

Erik Schmidt explains his selection of American artist Richard Prince with his new interpretation of pop culture and, since the 1980s his artistic appropriation of the imagery in advertisement surrounding us, which is much more radical than in Warhol.

By taking Austrian artist Alfred Kubin as his icon, Werner Reiterer brings the intellectual mood of the early 20th century into play. In Reiterer’s view Kubin succee- ded, like no artist, in “distilling” the essence of Sigmund Freud’s psychoanalysis at the beginning of the 20th century.

Ulrike Lienbacher, too, made Maria Lassnig, one of the most important woman artists of the postwar modern art in Austria, her icon. She explains how important Lassnig was for her. Lassnig’s direct expression of emotions and her social and political awareness made her a figure she could identify with. Indian artist Mithu Sen also selected an icon of the same sex, i.e., Sophie Calle, a French concept artist whose works often involve intruding into the private sphere of other people the artistic bounty of this act often being insights about herself. Sen shows a piece that is based on a similar approach. The artist intervenes directly in the plot of her film by assuming the role of a fictive figure.

One of the best known Saudi Arabian artists Maha Mullah opted for a star among the American artists Robert Rauschenbarg. Mullah’s early work consisted of collages that she created using local textiles and photographs of buildings from her homeland. A combination of symbolically laden, real imagery which expresses her view of life in Saudi Arabia. The artist found an affinity to and also a confirmation of her own work In Rauschenberg’s collages based on everyday objects (it was only later that she came into contact with his work.)

In the case of Zenita Komad and Dieter Roth, two artists come together who both focus on language, albeit from opposing positions. Spirituality meets here with anti-art, with “language” serving as a common denominator.

Anja Ronacher’s selection Louise Bourgeois is an artist who served a role model for generations of young female artists. One of Bourgeois’s big themes is fear in all its manifestations, processed in a most striking way in her installation piece titled “Cells”. Here the artist addresses traumatic experience. Anja Ronacher, too, deals with fear in her own works especially in connection with eroticism and pain.

Hans Op de Beeck selected Scottish artist Peter Doig, one of the most successful painters of his generation whose figurative painting resists alignment with any kind of trend. Using the classical means of painting Doig creates seeming idyllic scenes that appear to be both timeless and dream- like. Thanks to a hardly perceptible alienation of the environment, both artists create their own worlds. It is typical of both Doig and Op de Beeck to integrate the apparently banal aspects and clichés that refer not only to what is depicted but also to something more universally applicable.

Cy Twombly is one of the best known representatives of American abstract expressionism. A characteristic feature of his work is the combination of gestural painting and filigree lines; writing is also often added to his paintings. Martha Jungwirth, too, engages with the play of contrasts: most of her works com- bine intuitive spontaneity and an element of control. Between these two poles of the unconscious and calculation, Jungwirth studies the basic principles of painting. With Twombly she shares the emphasis of the gestural and the line but also the application of paint and the use of chance as an artistic means of composition.

The works presented in this exhibition not only demonstrate the horizons of artistic production today the bow to tradition in the art shown here is possible in all directions, not just historical but also between colleagues. The exhibition also shows the ongoing expansion of artistic modes of action. With the artist assuming the traditional role of the curator and deliberately staging his or her own personal system of references, new perspectives of the individual works emerge. One can hope that this will also provide inspiration for further reflection on the potential of art in today’s world. Bettina M. Busse

Bettina M. Busse is an art historian and curator living and working in Berlin and Vienna. She has curated a number of international exhibitions and published just as many catalogues on artists such as Joseph Beuys, Jenny Holzer, Anish Kapoor, Jannis Kounellis, Otto Muehl, Exhibition Davaj, Davaj! Young Russian Art, and many more. From 1996 to 2011 she worked as curator for the MAK in Vienna. In 2003 she organized, together with Karl König, the exhibition at the Austrian pavilion at the 50th Biennale di Venezia. Since 2010 she has been in charge of the Bruno Gironcoli Estate (which she also helped initiate) and since 2014 she has been the curator of this Vienna-based estate.
www.galerie-krinzinger.at