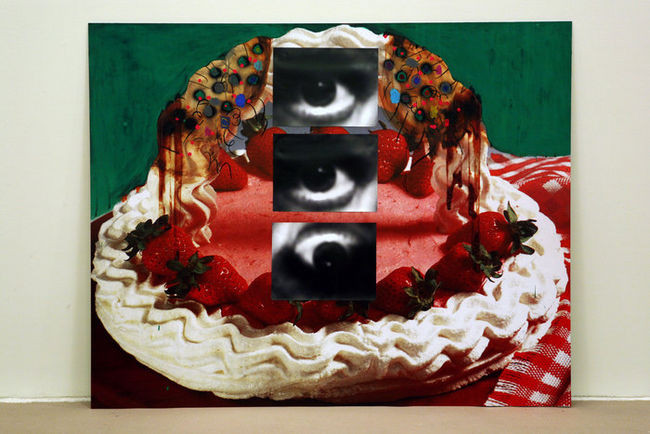 Brazenly unbound by medium Jannis Varelas’ practice effortlessly leaps from large scale multimedia drawings to sculptures, to videos and video props such as set design objects and video backgrounds as long as installations which flirt with materialistic lowness. Priori-tizing the fragmented over a systematic whole, he proposes novel pictorial possibilities via a constant negation of stylistic coherence. His figures and other imitations of the human form have a symbolic value while anatomy (eyes, vulvas, feet, phalluses) acts as an ana-gram of infinite permutations. Throughout his works, a blunt presentation of desire, horror, mess and perversity can be approached as a committed effort to unmask and demystify signifiers, symbols and archetypes. All the while he keeps throwing in nagging questions about human nature with an emphasis on highlighting identity’s constructed and manufac-tured quality.
Varelas’ new body of work underscores the inherently theatrical nature of his practice and offers an occasion to untangle his stylistic and referential webs. Late 70’s and 80’s TV-shows made for kids, “The Theatre of the Absurd” and Jean Genet’s play The Maids (a story of suppressed violence and ceremonial murder written in 1945 and first staged in 1947) appear to be the vortex from which his current works emerge and create the dialectical relation between the uncanny and the recollection of a known experience.
The notorious French novelist-poet-thief argued that we’re all controlled by the fear of pov-erty and his controversial plays are depictions of ritual struggles between the dispossessed and their oppressors. In a world where the majority feels cheated by the distance between expectations and reality, Genet’s prose is undoubtedly relevant; but beyond the typology of the master and servant archetypes, the codes of representation and the codes of behavior become entangled in Varelas’ approach.
In his video installation Solange’s Dream, Varelas exploits the durational nature of the me-dium and the traditional structure of start, middle and end by breaking down the story and reordering the expected sequence of the play. Like recovered memories, these temporal distortions generate an ambivalent state of dream and fantasy in which realities are re-placed by absurd reflections and offer a greater fluidity of meaning. At the same time, his handmade marionette protagonist, as well as the absurd iron figurine, like in much contem-porary artworks, appears as proxy an alibi, a surrogate and an envoy, what Thomas Ligotti characterizes in The Conspiracy Against The Human Race as the ‘malignantly useless’ nature of the world, luring out the sculptural and performative opportunities that puppetry provides.
For the main part of this show, Varelas found in The Maids the perfect double entendre, ‘the crudest metaphor’ available to represent his interest in the consequences of human pretensions, the implications of abnormal behavior (in Foucault‘s sense of the term) and the contrast between appearance and reality. By adapting such a play and using it not as allegory or manifesto but as a story, he creates a ‘drama of signs’, a riddle wrapped in an enigma. This is a clever strategy and apparently the essential ‘Règle du Jeu’ so that the game might go on; thus, Varelas attests that there is no synthesis but a perpetual dialectics: antithesis-thesis-antithesis-thesis...
In the show, the viewer can also see Brown Box, a room installation containing “pup-pet drawings”, made as a starting point for the artist new project, an imaginary TV-show, “The Blind Man”. A three-episode video work taking its title from the New York Dada journal, The Blind Man, published by the New York Dadaists in 1917. The installation is a glimpse on Varelas’ new fractional video piece, which will be made out of three parts, combining the theatrical plot of Tom Stoppard’s Rosencrantz and Guilden-stern Are Dead with the neurotic narrative structure of live TV-shows, featuring games for under aged kids. The piece aims to create an absurd existentialist tragicomedy.
www.galerie-krinzinger.at