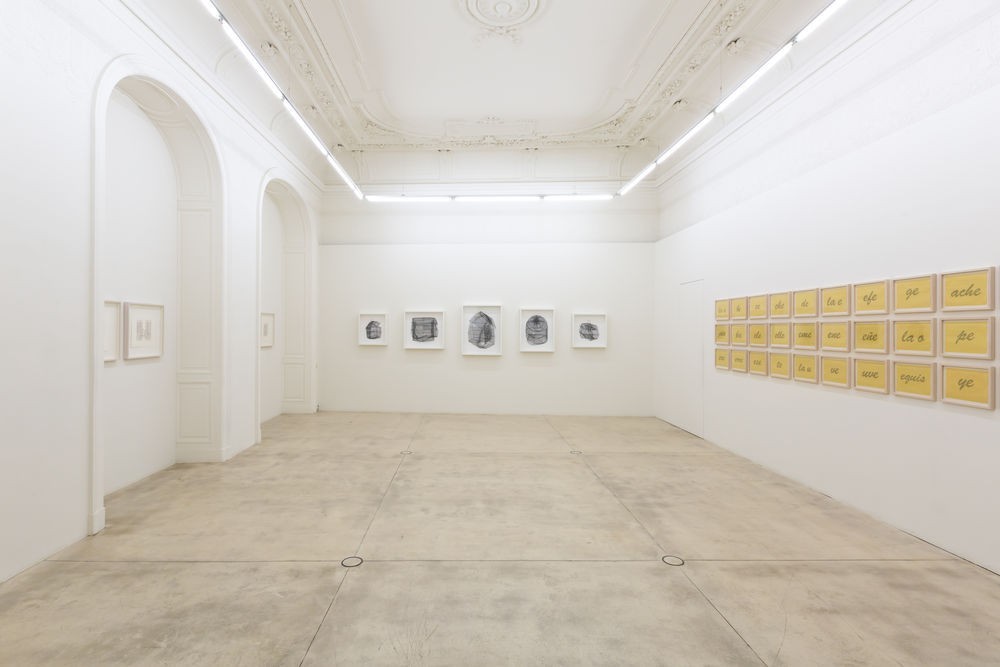 “To me, the medium of drawing is equal to a language, a language that is constantly adapting itself.”

Colombian-born artist Johanna Calle finds the themes for her poetic works mainly in the realities that arise from her Latin American background. Through an expanded concept of drawing and after intensive periods of research, her refined artistic practice sheds light on important social and political issues, as social inequality, violence, ecological concerns or the loss of cultural identity.

Nominal, las letras (2011) is a series of 30 drawings made of typed text on yellow accounting paper. The drawings contain all the letters of the Spanish alphabet, including the phonemes Ch, LL, Ñ and RR that are particularly characteristic for the sound of the Spanish language. The term letra alludes to a legal term that relates to the documents, which are used to set the arrangements of financial debts or guarantees, which metaphorically refer here to the economical crisis in Europe. Another project about economic factors, but from a different perspective, is Imponderables (2009), in which Calle reproduces the grid-like structures of obsolete ledger papers and transfers them to cardboard. In allusion to a strong, absolute iron order, the structures are recreated with wire, but instead of the rigidity and stability the material would initially suggest, these metal lines can easily be bent and torn due to their ductile properties. As equilibrium, in economics terms, has proven to be vulnerable to unpredictable and uncontrollable changes, these drawings depict the instability of today’s global economic sphere.

The work series Perspectivas (2012), refers to a drawing method used by architects and designers to represent a three dimensional object on a flat surface. By forcefully flattening cage-like wire structures that are actually used for trapping wild animals, Calle makes a comment on issues of environmental habitats in general as well as on the specific ethical problems within Colombia and other parts of the world that directly derive from the mass production of eggs and poultry.

In two new series from 2017, Calle again deals with questions of language. In Untitled (2017) she draws structures of irregular volumes with the help of a mechanic typewriter from the 1940’s. The outlines that define these structures are fragments of texts written by Jorge Luis Borges from The Book of Imaginary Beings from 1957 and are selected by the stories that relate to winged creatures. The Foneto (2017) drawings are made from found-objects that are placed on a square surface, whereby each one of these objects is carefully placed to resemble a hand-written calligraphic gesture.