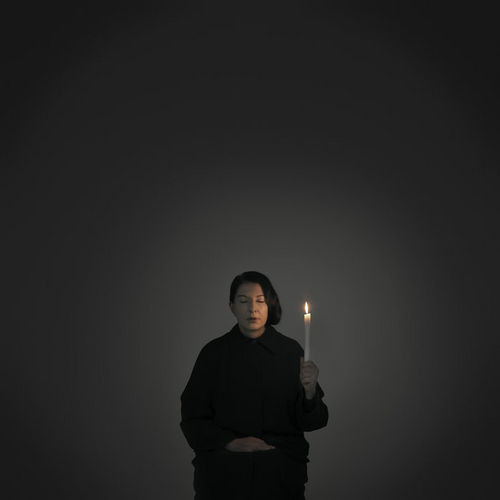 Since the 1970s Montenegrin artist Marina Abramovic, born 1946 in Belgrade, has been sounding out incredible physical and mental boundaries. The concept of time and the inclusion of the public in her work is also an important aspect of the artist who today lives and works in New York. This significance of this dimension of her work could also be seen in her performance “Thomas Lips” which took place at Galerie Krinzinger in 1975 as well as in her “Easy Pieces” performed at the Guggenheim Museum, New York in 2005 and “The Artist is Present” which was part of her eponymous retrospective at the MoMA in New York in 2010. At Galerie Krinzinger Marina Abramovic will be showing works of her latest series “With Eyes Closed I See Happiness”. On view will be portraits of an iconic artist in a state of selfreflection.

The visitor is invited to look inwards and to let the outside world drift by. The large-format works show the atmosphere in which the artist surrounds herself and the gestures that she selected to perform this mental exercise. The empty space surrounding Marina Abramovic in the photographs fixates the action very symbolically, reinforcing our perception of the artist as a figure. The photo works are supplemented by a group of sculptures, casts of parts of Marina Abramovic’s body that are infused with quartz crystals and presented on glass pedestals. The wax hands and feet result from an encounter that Marina had with Shamanic practices on a trip to Brazil. The sculpture “Chair for Human Use with Chair for Spirit Use” is part of a group of works with the title “Transitory Objects”. These objects are the point of departure for processes taking place in the individual. The idea is to open up possibilities for the individual to allow his/her own inner space to emerge anew, with the object serving as a bridge to reach this inner space. Marina Abramovic’s works – performances, sounds, photographs, videos, sculptures and transitory objects for human and non-human use – have already been featured in a number of solo exhibitions in the USA and Europe and in a number of large international group exhibitions as, for instance, at the Biennale di Venezia (1976 und 1997) and at the documenta VI, VII und XI in Kassel, Germany. Marina Abramovic was awarded the Golden Lion as Best Artist for her extraordinary video installation / performance “Balkan Baroque”, her reaction to the Yugoslavian in 1997. In 2003 she received the Bessie award for her 12- day performance “The House with the Ocean View” at Sean Kelly Gallery, New York. In 2008 Marina Abramovic received the Austrian Cross of Honour for Science and Art. With her retrospective “The Artist is Present” at MoMA, which also played a major role in the eponymous film co-produced by the Thyssen-Bornemisza Art Contemporary, she was awarded the 2012 Panorama-audience prize in the documentary film category following the first European showing at the 62
nd
International Film Festival in Berlin. Marina Abramovic will present the first Austrian showing of the film “The Artist Is Present” on Friday, 26 October at Gartenbaukino at 2 p.m. which will be followed by a discussion where she will also be present. The film will be launched in selected Austrian cinemas on 9 November 2012. Ursula Krinzinger and Marina Abramovic can look back on a decade-long friendship and collaboration. Already in 1975 Galerie Krinzinger in Innsbruck showed selected works by Marina Abramovic and her performance “Thomas Lips” in an exhibition with the title “Photo Documentation of Performances Rhythms 10, 2, 5, 4, 0”. Ten years later, the artist once again presented at the Innsbruck gallery with a compelling piece “Photographic Documentation of Performance 3“ in the “Symbol Tier” group exhibition. And in the 1992 exhibition “Transitory Objects” dedicated entirely to her work with a catalogue with the same title, Marina Abramovic was also able to win over the Vienna art public at Galerie Krinzinger.
www.galerie-krinzinger.at