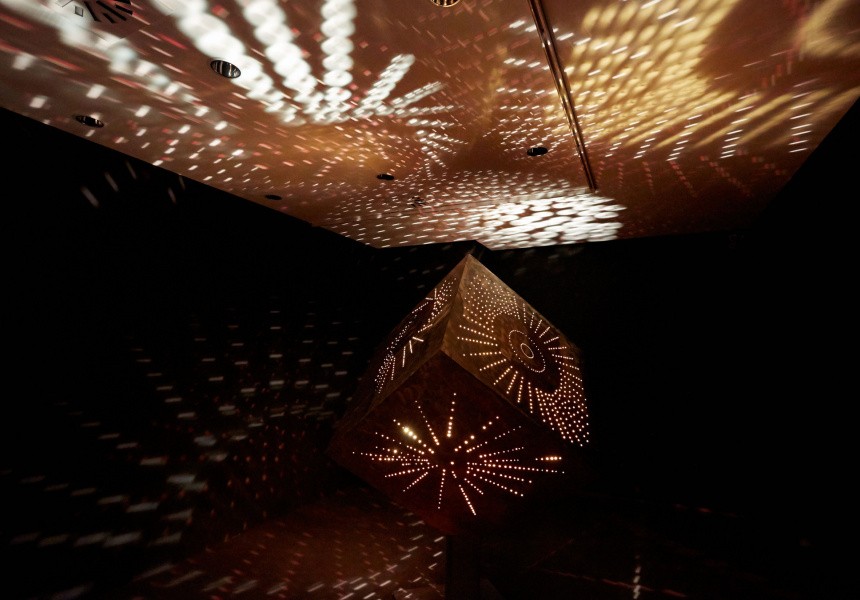 Otto Piene was born in 1928 in Bad Laasphe, Germany. From 1949 to 1953 he studied painting and art education at the Academy of Arts in Munich, followed by a philosophy degree in Cologne. In response to the gloomy post-war art, Otto Piene and Heinz Mack founded the avant-garde group ZERO in the spring of 1957, whose predominant idea was a new beginning in art involving the elements of light, movement, wind, fire, air and energy - at this time he created his first grid-paintings. By pushing pure pigments through a sieve, the artist created a mechanical pattern that vibrates on the retina and releases the light energy of the pigment. Piene also explored other techniques to "liberate light," for example by burning candles through stencils that left traces of soot. By erasing his personal touch in these works, Piene separated from gestural painting, for him it was not the manuscript of the artist, but the experience of the viewer, which defines the artwork. As a pioneer of multimedia art, Piene worked early on with light and movement.
For his light sculptures Lichtbalette (since 1958), the artist used various forms, such as cubes or spheres, from which light is projected onto the surrounding walls through grid surfaces. Piene also emphasized the dialogical character of his art in his light installations. His installations are defined by the locations, by use, staging. Finally, in old age, Piene transferred the idea of the grid-paintins to clay and ceramic works, he used special glazes to further extend the possibilities of light reflection. Piene’s great painterly works refer to his big SkyArt projects, which he developed in Boston from 1968 on until his unexpected death in Berlin in 2014.
In addition to oil, fire and smoke pictures, light reliefs, clay-works there will also the light installation Pirouetten 2012/14 to be seen in the exhibition.

Meret Oppenheim was born on October 6, 1913 in Berlin. Already in her teens she decidedherself to art, and in 1933 she traveled to Paris with a friend who was a painter. There she met Alberto Giacometti and Hans Arp, Man Ray photographed them on a printing press in the cycle of images Érotique voilée, which earned her the reputation of the muse of the Surrealists. In 1936 she moved back to Basel. In 1956, costumes and masks for Daniel Spoerri's production of Picasso's play How to Pack Your Wishes on the tail. She lived and works alternately in Paris, Bern and Carona. In 1981, during Oppenheim's lifetime, Galerie Krinzinger exhibited Meret Oppenheim in the gallery space for the first time. In 1997 she organized a retrospective, which was shown at the gallery in Vienna at the Museum voor Moderne Kunst Arnhem, Netherlands, Uppsala Konstmuseum, Sweden and the Helsinki City Art Museum, Finland. Meret Oppenheim's work spans an incredible variety of disciplines, styles and materials. She drew, painted, wrote poetry, created objects and collages and designed furniture, clothes and jewelery. Meret Oppenheim was one of the most unusual artists of the 20th century. Oppenheims often simple languge in drawing proofs the virtue of the importance of immediancy in art. These characteristics of the drawing are to a great extent contrary to Oppenheim's artistic attitude, which is characterized by openness, directness and intuition.

Daniel Spoerri (co-founder of "Nouveau Réalisme") was born in 1930 in Galati, Romania. In the past 78 years he lived and worked in Romania, Switzerland, France, New York , Greece, Germany, Italy and Austria. In addition to numerous international solo and group exhibitions, he realized major projects such as the founding of a restaurant in Düsseldorf (1968) and the invention of the "Eat Art" as well as the exhibition principle "Musée sentimental". From 1978 to 1989 Daniel Spoerri taught in Cologne and Munich. From 1989 he devoted himself to a new major project: a 14-acre sculpture garden in southern Tuscany "Il Giardino di Daniel Spoerri - Hic Terminus Haeret". In 2007 he opened the "Spoerri Exhibition Center" in Hadersdorf am Kamp (Lower Austria). The name Daniel Spoerri is first associated with his tableaux piège . The artist himself defined this object-assemblage, which emerged in the early 1960s: "Objects in random, ordinary or untidy situations are fixed to their random base (table, box, drawer, etc.) in the exact situation in which they are found , (..) by explaining the result to the image, horizontal becomes vertical. Example: The remains of a meal are fixed on the table and hung against the wall. Daniel Spoerri applies the trapping principle in different contexts; For example, under the title "artist palettes" he fixed work tables of friendly artists or stuck the contents of drawers with everything he found in them. Looking back, Spoerri calls this "test drilling". He always wanted to show a piece of reality. Also flea market stands belonged to it. With the series of flea market trap pictures, the object artist, takes up one of his ideas of 1966 again.

Bernd Oppl is showing a choice of new photos and collages that he created during his artist residency in Wiels, Brussels. In his works „Terminal A“ and „I looked around the internet“ from the Black Rooms series, he continues his room spatial installation, in which he creates modeled realities. The templates used for the photos are models of rooms.
In addition, he is also showing an abstract series of photos. At first, the motives of the Splinter’s series look like broken glass but actually come from the inside of an analog middleformat camera. Torn celluloid parts are shaken in an old analog camera body, leaving visual traces on the film layer after exposure.
A similar principle is used in the Lens Solution series. While in Splinter, the camera view is turned into the interior of the camera, Lens Solution contains exposed negative fragments inside the camera. These are film strips with advertising photographs of flea markets. Through these motive fragments, analog photos are created. The film fragments, which are located inside the camera, preform the perception of the outer world during the shot.
The collages Flesh and Stone show tattooed body fragments. The photos were taken out of diverse Internet forums and archives. All of the selected tattooed body parts have in common that they depict architecture. The motives are combined as a skyline of a fictitious city.
The work Peep Hole consists of a black box with an eye in the middle of a round opening. It is the artist's eye and his eye movements. In a strange close-up, the eye is focusing and the movements of the eye race through the carousel of an endless video loop at a confusing speed of time.
Bernd Oppl was born in 1980 in Innsbruck. He lives and works in Vienna.