From Sea To Dawn 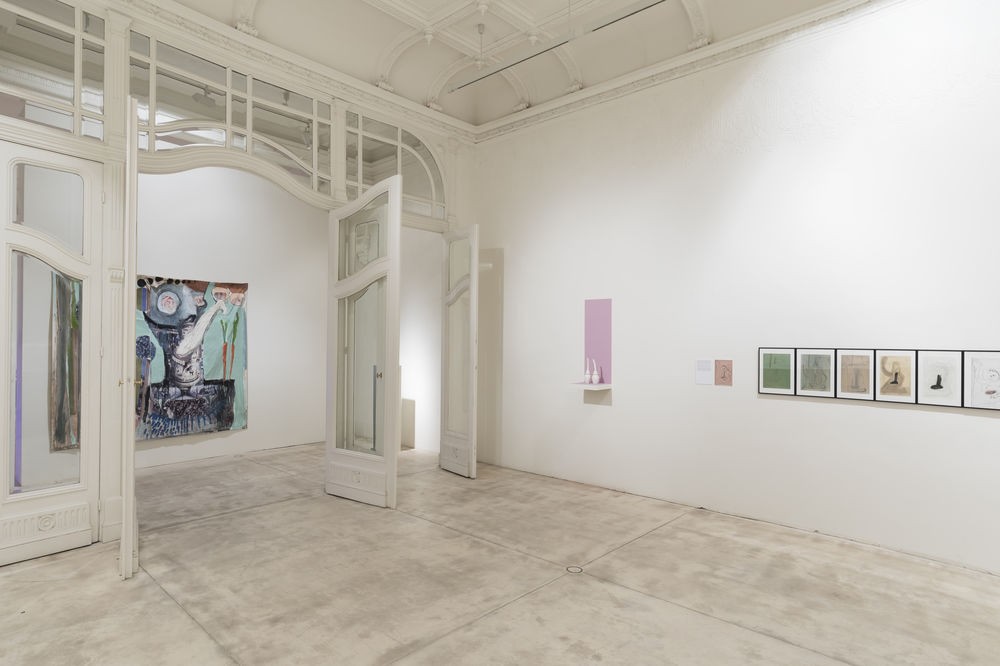 Galerie Krinzinger is pleased to present From Sea to Dawn a collective project by Dubai based artists Ramin Haerizadeh, Rokni Haerizadeh and Hesam Rahmanian.

From Sea to Dawn is an exhibition of performance traces: an ongoing work-in-progress that spans video, paint, drawing, text, poetry, photographs, and found objects. Its motivating theme is current news representations of migration. The goal is to invite viewers to witness and ruminate on these events with them.

In an approach typical for the artists, everything has been created in character, as 'creatures.' The creatures have distinct personas that are built up gradually and collaboratively, often in impromptu interactions with everyday objects. As the creature builds its identity, it constructs an organic ecosystem of objects and is influenced by it in turn. In From Sea to Dawn many of the creatures’ performance props evoke the migrant’s life: mylar, plastic water bottles, flashlights, and especially the ubiquitous orange life jacket, which is repurposed here as masks, torsos, prosthetics, and braces.

The animated video work, From Sea to Dawn (2016–2017), uses news imagery of the migrants’ journey across Europe. Familiar images are distorted with painterly patterns that interrupt what the artists see as the photographs’ conventional Western modes of representation, especially its sentimental, romanticizing pathos. By using symmetry, flatness, distortion, and humor, the video retells the migrants’ journey in an Eastern visual language.

Many of the same strategies are used in Where’s Waldo (2016–2017), a portfolio of collaborative drawings. Migrant stories are stilled and distilled, wreathed in 'grotesque garlands' to give the bodies a more forceful sensory impact. They describe these works on paper as 'a regurgitation, a throwing up and taking in again, ruminative, like a philosopher — or a cow.'

Unfaithful Poems (2013–2017) is a portfolio of drawings and paintings that respond to fragments of poetry. The text was commissioned by the artists as an 'unfaithful,' subjective rewriting of a twentiethcentury Iranian 'pilgrimage ballad,' which translates the migrant’s story for the present. The project unfolds within several large paintings. They see their pigment-based work as 'unpaintings': produced in the medium’s negative space, decentering its traditional, expressive focus on the ego of an individual artist — which is also the aim of their “creaturely” collaborative process.

Ramin Haerizadeh (b. 1975, Tehran), Rokni Haerizadeh (b. 1978, Tehran) and Hesam Rahmanian (b. 1980, Knoxville) have lived and worked collaboratively in Dubai since 2009. They work independently and together propagating a form of collaboration that doesn't suppress individualism. The seeds of their language were sown as early as 1999 in Iran. Their practice offers up a novel redefinition of the collective, as theirs is constantly growing and contracting to incorporate friends, writers, and artists at large. It entails the use of both low and high art references, and freely embraces 'what is considered marginal, wasted, wrong, messed up, useless, and taken for granted'. Their individual practices differ stylistically while political and social commentary become inherently subversive in a common reflection. The exhibitions they conceive are as much insights into their daily practice which they designate as the ritual of living and working together.

Their immersive and multimedia installations build upon their perception of life as a theatre while also making their process visible. Generally, their proposals begin with the 'creatures' that the three artists become, both physically and mentally, and whose very beings are the roles that are eventually played. Placing emphasis on the importance of 'reporting on our time', they wish to bring attention to the urgencies of the present moment while opening up questions over a spectrum of subjects such as views on art and culture, gender fluidity, and power mechanisms. 'The conglomeration of things actually asks us to look at what is in front of us' comment the artists, demanding time for contemplation. The artists seek to encourage the viewer to recognise the reality of interdependency and the value of solidarity with others. Therefore, they create a sense of alienation or estrangement from reality with depersonalised individual subjects (creatures) and inhomogeneous crafted objects. In doing so, they aim to exorcise the sentimentalism, resulting in an emotional distance to elicit from the viewer astonishment rather than empathy and ultimately allowing for critical analysis.

Recent solo exhibitions include The Maid.2nd Han Nefkens Foundation-MACBA Award (2017), The Birthday Party (2015) at the Institute of Contemporary Art (ICA) in Boston, Slice A Slanted Arc Into Dry Paper Sky at the Zurich Kunsthalle (2015), Those Who Love Spiders, and Let Them Sleep in Their Hair at Den Frie Centre of Contemporary Art in Copenhagen (2015) and Another Happy Day (2017) at the Guggenheim Abu Dhabi. They also participated in The Restless Earth (2017) for the Milan Triennale in association with Fondazione Nicola Trussardi and contributed to the National Pavilion of the UAE at the 57th Venice Biennale's catalogue as an extended site of the exhibition. They took part in the Liverpool Biennale 2016, and the 8th Asia Pacific Triennial of Contemporary Art at the Queensland Gallery in Brisbane (2015).
www.galerie-krinzinger.at