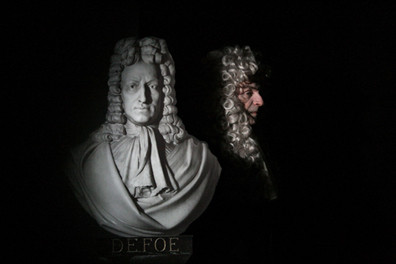 The film installation “The Last Days of Jack Sheppard” is based on the inferred prison encounters between the 18th century criminal Jack Sheppard and Daniel Defoe, the ghostwriter of Sheppard's 'autobiography’, set in the wake of the South Sea Bubble of 1720 – Britain's first major financial crisis. Shortly after Sheppards death his biography became a model for Macheath in “The Beggar’s Opera” that, in turn, Bertold Brecht adapted in his “Three Penny Opera”.
A “critical costume drama” constructed from a patchwork of historical, literary, and popular sources, the film's fragmented narrative structure explores the connections between representation, speculation and the discourses of high and low culture that emerged in the early 18th century and remain relevant to the present day.

“The Last Days of Jack Sheppard” is presented within an installation fabricated from elements of the original set and a display of archival material including prints and popular cultural artifacts relating to Jack Sheppard. This laying bare of the film's structural elements plays on the notion of the 'historical construct' and provides clues to the interpretation of the many references contained within the film.
www.galeriekrobath.at