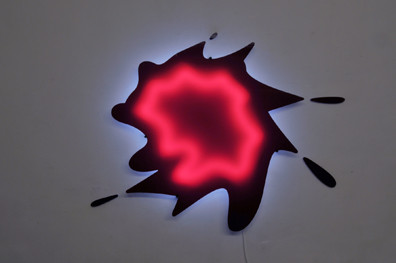 On the exhibition of Brigitte Kowanz’s works at Krobath Vienna

“From the outset, light was Brigitte Kowanz’s artistic means of achieving both transgression and precision” states Rainer Fuchs in the exhibition catalogue accompanying the comprehensive retrospective of the artist, which can be seen until October 2010 at Vienna MUMOK. In the same text he adds: “She needed to transcend a conventional approach to images and painting in order to precisely define a new and integrative relationship between work, space, and viewer.”

This pretty much sums it up. If only light wasn’t such a “mysterious” thing, as Brigitte Kowanz puts it. Kowanz believes that light can reveal itself both in the form of waves and particles. And whether we see waves or particles depends entirely on the point of view and the measuring instrument of the viewer.

Light as the sum of single images which on the one hand complete, and on the other, exclude each other. The works Kowanz presents here in her second solo exhibition at Krobath Gallery provoke seemingly contrary sensory impressions – loosely based on an idea by the German science journalist, Ernst Peter Fischer, who posits that “every description of reality comes with a second one which counteracts the first, but is at the same time equally valid.”

Monochrome luminous splashes of colour from her latest group of works Speechbubbles enter into a dialogue with her work Zeittiefe from 1997, in which rotating signal lights behind white acrylic glass screens create moving spaces of light and shade that could be described as filmic worlds.

By juxtaposing these two groups of works, which translate time using completely different speeds, one of Vilém Flusser’s ideas becomes visible, or rather understandable: “Space is solidified time, and time is solidified space.”

In order to better understand the interaction between these two formally divergent groups of works, we must go back to the 1980s when Kowanz started to work intensively with the medium of light. For her, “making light visible means drawing attention to the seemingly self-evident and ubiquitous, making it conscious so as to recall its traps and blind spots.”

Rainer Fuchs describes Kowanz’s early works as follows: “Using dot-shaped sources of light and glass (sometimes sandblasted), targeted spaces of light and shade are projected into real architectural spaces: imaginary spaces into real spaces – as can be seen in the MUMOK exhibition. The fine transparent degrees of shade form walk-in illusory geometries and fragile and ephemeral artificial projections.” And he continues: “[...] what reveals itself is an energetically stabilized process, something previous”.

So Rainer Fuchs views Zeittiefe as a logical extension: “In her works with rotating signal lamps − spraying colour onto both the room and the viewer in a pulse-like manner and rhythmically overstepping all fixed borders − spaces of light and shade now also take on a temporal dynamic. Here the transformation of motifs into spectral and autonomous light that is seen in painting is radicalized within a spatial and temporal monochrome staccato.”

In the Krobath Gallery the temporal dynamic of Zeittiefe meets the frozen dynamic of Speechbubbles. In the latter works the contours of the individual handwritings, which are arranged in a circle, form the borders of a surface. The shape emerges from the writing movements. Basic Idea, Flashover and Outshine are snapshots of a dynamic, or stills of a constructed process of writing. If we take a closer look at Basic Idea, for instance, the contour seems to materialize as a vague and blurry oscillating line of light directly from the centre of the colour splash. The Speechbubbles turn into picture puzzles: they oscillate between handwriting – surface – splash of colour – space – movement. The bubbles are also the code of the handwriting (or the act of writing) and of images (or the act of painting).

Painting as a subtle issue in Brigitte Kowanz’s works – particularly in the juxtaposition presented at the Krobath Gallery – is more present than it may seem at first sight. In his article for the exhibition catalogue, Peter Weibel also makes reference to this by taking a look at the entire spectrum of Kowanz’s oeuvre, ranging from coloured light painting and film to light artworks: “From one image to the succession of many pictures, from the canvas to the frame, from painting to film”, and he adds: “the presentation of light in painting turns into real light in art.”