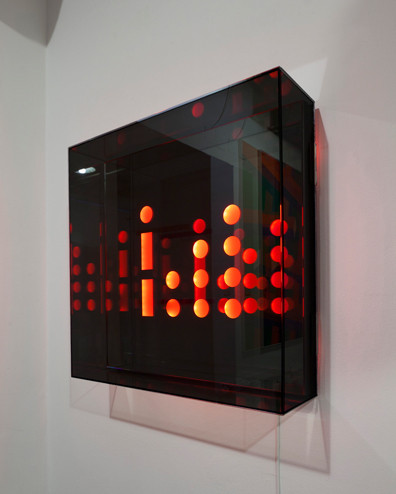 Brigitte Kowanz’s conceptually conceived work is based on abstract philosophical thought presented on the basis of scientific and technological insights, but it is thought that emerges in each individual work, in every presentation in a room, with extraordinary sensuality and atmospheric density, and indeed beauty as well. Her attempts to come to terms with film, video and photography led her to addressing the phenomenon of light, which has effectively become her trade mark, at a very early stage. The work with mirrors began in places in the 1980s, but is then used consistently as ambiguous material in objects and installations from the late 1990s, pushing forward and extending questions about content. Text and language, also coded in Morse form, are further elements in the complex interplay of seeing and understanding, perception, knowledge and insight that form the component parts of Kowanz’s powerful works. She brings light, mirror and language together within the concept of space, which is her actual research field, in which physical space does not seem to be separate from metaphorical and virtual space. By interrogating the co-ordinates of threedimensional, architectural real space she breaks its dimensions up into multiple perspectives and takes us into new and different thought and perception categories. The speed of light is invoked over and over again in her work, which refers at the same time to the incomprehensible presence of light, to its unimaginable, absolute value, and to the fact that it can be measured precisely, but also to the rapidity of with which information is conveyed electronically.

Kowanz uses mirrors as a kind of metamedium for visual transfer, as mirrors render light visible and conceal infinitely many images within themselves through the penetration of real and virtual space. At the same time they show seeing itself. By transforming entire rooms into reflecting mirror cabinets, she places viewers in an artificial, imaginary spatial structure that opens out from the inside and in which the space-time continuum meets the light-shade continuum. Umberto Eco defines mirrors as perceptual prostheses representing channels and media for the flow of information. At the same time, for him “the magic of the mirror lies in the fact that its extensivenessintrusiveness not only allows us to see the world better, but also to see ourselves as others see us.”1 Kowanz’s work makes deliberate use of the mirror metaphor developed by Freud via Lacan, in which the mirror is characterized as a threshold phenomenon showing the boundaries between the imaginary and the symbolic, using mirrors not just as a visual transfer medium, but also as an entity for creating awareness. “Viewers do not just see themselves in mirrors, mirrors can also impel addressing the self and self-reflection.”2

Her work with binary codes includes, as well as the idea of interconnection, the exploration and counterbalancing of complementarities, in other words apparently polar phenomena such as light and shade, which are nevertheless inseparably linked because mutually dependent. “Generally speaking, reality can be understood only as the sum of complementary images.”3 If Kowanz’s work is analysed from the point of view of light in particular, it is at the same time shade that she deliberately concentrates on in her work, and that helps to determine significant proportions of her artistic thinking. Light is not visible in itself, but is perceived only when it meets matter. Light is space, time and speed. But shade provides evidence of the presence of light, of things in space and of time that can be experienced. Jan Tabor expresses the following thoughts in a Brigitte Kowanz catalogue: “One writes and speaks only of light. Even though light would not be visible without shade. What is shade? A suburb of night? The forecourt of sleep, which since the Baroque period has been called death’s little brother? Is the shade black light? Or invisible light? Or a form of light?”4