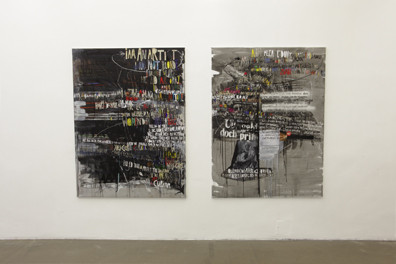 "All these "Is" are interwoven in the writing, they form the most colourful patterns, depending on how one reads them and which aspect is emphasized."

(Roland Barthes, The Preparation of the Novel)

Despina Stokous’ collages comprise a dense web of artistic forms of expression and various materialities, embedded in the complexity of contemporary topics. By adapting media material such as images and texts from newspapers and from the web, Despina Stokous pieces together the topics of her images. The content of the quotes or images used comment on or determine the content of the work itself. Despina Stokous is an artist whose life couldn’t be more modern. Her works unite and assimilate her roles as artist, curator and editor incorporating a crossover of topics and techniques. Due to the complexity of the content, collages would appear to be the most effective way of expressing her subjective realities. She uses reviews of her own exhibitions or exhibitions she has curated, interviews and virtual representations of prominent issues such as Freud’s “Madonna / Whore Split”, and by integrating them as cut-ups, divests them of their actual informational content in order to process and analyse them in collage form. Stokous places classical topics in the context of temporary pop culture and art, and scrutinises their relevance and relation to the present. The web of diverse topics combined in this exhibition is the result of an analysis of urban culture and the artist’s existence. In addition to cut-outs from her e-mails and newspaper articles, she also uses keywords from everyday web searches. The web platform Google functions as a kind of virtual filter for the presentation of the results for the keywords entered. The layers of images and letters mirror the aesthetic of speed and expressive colouring, which at the same time is dampened by the typical characteristics of classical painting. The material and content of the works take us on a dizzying rollercoaster ride. At first glance, the viewers get drawn into the architecture of words, which look like amorphous constructions. When the viewers come closer, they see that the section linings are in fact perfectly cut-out letters forming a meandering text in the midst of a hallucinogenic aura. The letters are the prominent feature, giving the collages their figurative nature and their three-dimensionality in a rather paradoxical way. The seemingly transient and chaotic character of the images is in fact based on a process of meticulous collecting, cutting out and pasting of letters from newspapers. Here, the newspaper is not only the source of material for the images, but also plays a part as a transient medium. The newspaper is also present on the content level as text-images in the image. The newspaper cut-outs are thus a quote within the image composition, revealing the message of the image. Despina Stokou formally disassembles and comments on the content of the cut-outs in her letter collages. However, by using media both as a source of material and to reflect on the content, the image content merges with the image composition. Her reflections on the position of the artist and the curator make Despina Stokou a precise seismograph of contemporary debate in the art world and of her own position as an artist. And thus her letter to an anonymous gallery is a tongue-in-cheek, yet straightforward observation of the contemporary art scene from the artist’s point of view.