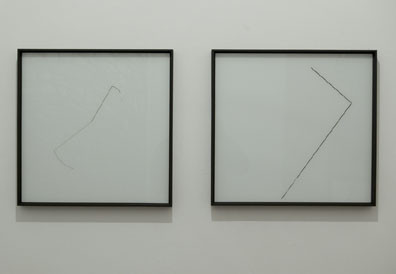 In his third solo exhibition at the Krobath Wimmer Gallery, Florian Pumhösel (born 1971) presents an animated film and a new series of paintings on glass.

“OA 1979-3-5-036” is the conversion of a 17th century catalogue of dress patterns into a 16mm animated film. The catalogue he used here is a book by Take Hiratsugi called “Gozen Hiinagata” (Dress Patterns for Noble Ladies, ca. 1690), which is one of the earliest design catalogues for the kosode, the forerunner of the kimono. For his film, Pumhösl selected, simplified and rearranged these patterns and transferred the book in negative onto a timeline. The cuts in the film represent the act of turning the pages of a book. The patterns presented in this way are the result of a process of reduction that makes visible a typology of fragments of the graphic elements that are depicted in abstracted form in the book – these include, for example floral and landscape images, objects from everyday life and architectural elements. “OA 1979-3-5-036” (the title refers to the call number of the book in the British Museum) can be regarded as a record of an artistic experiment that focuses on the selective perception of a form as well as remembering and classifying forms in a catalogue.

Pumhösl’s pieces consisting of images, assemblages and historical elements are closely linked to the creation of three-dimensional constellations, to exhibition displays and their interaction with the exhibition space and/or to the use of other media, such as abstract films. In his more recent works he focuses on abstraction as cultural translation. Abstraction is both the method and the motif of his work.Florian Pumhösl’s works have been presented in a number of international solo and group exhibitions over the past years.
www.galeriekrobath.at