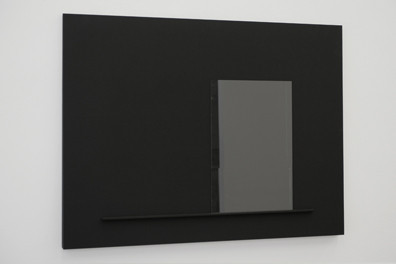 Florian Pumhösl, whose solo exhibition “678” recently featured at Vienna Mumok, is currently showcasing a six-piece series created this year at Krobath Gallery. The series comprises large, black, landscape-format panels (120x90 cm), mounted at a slight angle – tilted just enough to prop up pieces of flat glass. Pumhösl uses the same background – enveloped in book cloth with slim mounting bars – he developed for his 24-piece series “Bewegliche Bühne” (“moving stage”), initiated three years ago in his solo exhibition at the Krobath Gallery and presented in its complete form in a solo exhibition in Kunstverein für die Rheinlande und Westfalen in Düsseldorf last year. Pumhösl used the panels to frame the exhibition space and arranged abstract sequences comprising pieces of glass, resting loosely against the picture frame yet ordered according to a fixed system.

In his new series, Pumhösl draws on his earlier works. These pieces differ, however, in that the formative principle is not the montage of modules, but rather the fragmentation of a single element that is used in each work in the series: six portrait-format plates of 2-mm float glass, each measuring 54x36 cm, lean against the panel base. At first sight, the plates seem to be identical, but on closer inspection it emerges that they too consist of fragments. A horizontal line divides the surface into two fragments of different sizes. This surface fragmentation is the same in each composition, while vertical or additional horizontal lines give each of the fragments its own definitive characteristic. Many parallels can be drawn between the manner in which Pumhösl arranges the glass pieces – each arrangement a reference to the time the work was exhibited – and abstract techniques such as construction and montage.

Pumhösl, whose work is characterised by the form concepts used in constructivism and minimal art, takes an approach that involves simple shifts or additions within the canon. In his abstract picture series he explores the potential of an image, going beyond the limits of mere reference, autonomy or illustration by identifying specific forms.