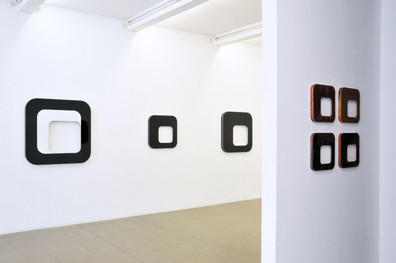 The Krobath Gallery is pleased to open an exhibition featuring the latest works of Berlin-based artist Gerold Miller on March 16.
Following the group exhibition “black/white & chewinggum” curated by Miller in the summer of 2006 and his solo exhibition in 2008, this will be the second solo exhibition of Gerold Miller’s works. Born in 1961, he is viewed as one of the most radical sculptors of his generation.
From the beginning of his explorations of painting in the early 1990s, Miller adopted a particularly elegant strategy in order to depart from the image, without dismissing it as a moral/sensual element in his wall objects, which can be placed somewhere between painting and sculpture.
Conceptually, each group of works is utterly distinct from the others. However, an extraordinary phenomenon unites them: all his works enclose an empty space as a compositional power cell, i.e. their centre or another prominently positioned optical centre is empty, appears to have been emptied or has simply been left empty.
“By revealing the surface itself and referring to the wall as the ultimate surface, Miller not only hits the limits of geometrical abstraction and minimalist sculpture, but also of modernism itself.” Peter Weibel, in: G.M. – Get Ready; Nationalgalerie im Hamburger Bahnhof. Museum für Gegenwart Berlin, Heidelberg 2002.
Based on the formal achievements of transatlantic Minimal Art and Central European Concrete Art, in his latest group of works – entitled “total objects” – Gerold Miller transcends the demand for radical reduction and the absolute autonomy of the artwork.
Contemporary everyday reality, which is dominated by visual attractions and confronts us with prefabricated combinations of colours and constellations of shapes in the domains of design and fashion, serves Miller as a well-tested ready-made for his image creations.
The method of treating surfaces Gerold Miller applies in his latest works (coppering with multi-layered oxidation processes or galvanisation) gives rise to a dynamic interaction with visual principles.
Miller uses the contrast between somewhat delimiting matt surface and colour particles and glossy elements opening up towards the room, between smoothly modulated monochromes and carefully displayed colour compositions, to push his artistic approach to the endpoint/the very basis of the figurative: maximum image effect with minimum shape input.