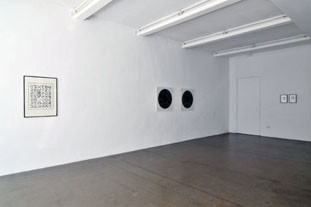 In January 2008, in its 12th year of existence, Galerie Krobath Wimmer expanded its exhibition space.
In the first exhibition taking place in both locations (Eschenbachgasse 9 and Nibelungengasse 11) we are presenting one representative work each by four artists of different age groups and nationalities whose development and works we have lately been following with great interest.
This presentation should not be considered as a curated group exhibition that tries to construct a link between the similarities of the individual works, but rather as a chance to get to know the works of these different artists in a single location within the context of Vienna’s art scene.

Běla Kolářová
“Selected Works”
The wide-ranging oeuvre of Běla Kolářová (born 1923, lives in Prague) oscillates between photography and assemblage. The methods she draws on can be compared with those present in neo-realism, neo-constructivism and op-art. Quite early in her career she left behind classic photographic work and turned to experimentation: as early as the 1960s she worked with roentgenograms, wax casting and similar techniques. Her interest in the variability of geometric structures and her discovery and development of some basic, initially neutral but metaphorically significant elements led her to create material assemblages (1964) and, later on, drawings with make-up. She chose a small number of mundane and simple but very personal everyday objects and playfully arranged and rearranged them again and again to create new structural forms. She skilfully and easily shifts the original meaning of the objects she uses in her works and assigns new meanings to them as part of an abstract pattern that has assumed an independent existence.

Falke Pisano
“Chillida: Forms and Feelings”
In her cinematic essays, performative presentations and publications, Falke Pisano (born 1978, lives in Amsterdam) explores the relationships between architecture, art, the public and media communication. In her works she focuses on her analysis of formalism and the character of objects, their relationship to the spoken language and script, and the notion of unlimited autonomy linked to them.
Her work “Chillida (Forms & Feelings)”, a synchronised two-channel video clip, is a kind of a personal report on the artist’s emotional reaction to David Finn’s photographs of sculptures by the Basque sculptor Chillida: “While going through the pages of the photo-book I try to trace the relationship between the characteristics of these specific objects, their depiction, the experience of the photographer and his daughter and my own preoccupations concerning existential matters and my emotional response.” (Pisano)
Pisano’s work flouts the conventions of presentation and discussion of works of art. It becomes a form of poetry located on the threshold of the performative.

Janice Kerbel
“Remarkable”
In her works, Janice Kerbel (born 1969, lives in London) explores the relationship between the universe of notional things – the pure idea of action – and the world of concrete activity. She first attained recognition through her fictional “plans”, diagrams and blueprints, which she put together to form assemblages, installations, business games and environments where she initially negated the distinction between the two levels.
She mixes the possible with the impossible or even absurd, and the result is a kind of “substantiated reverie”, which gives observers a sense of uncertainty until they realise they are watching a purely fictional “work of art”.
Her work “Remarkable” (2007) is currently on show at the Krobath Wimmer Galerie. The style of this series of posters is based on posters of 19th century fairs, each presenting various fictional female performers. The women are all unique, spectacular personalities with extraordinary abilities. The characters include Iggy Fatuse, The Human Firefly, Faintgirl, The Regurgitating Lady and The Shyest Person Alive.