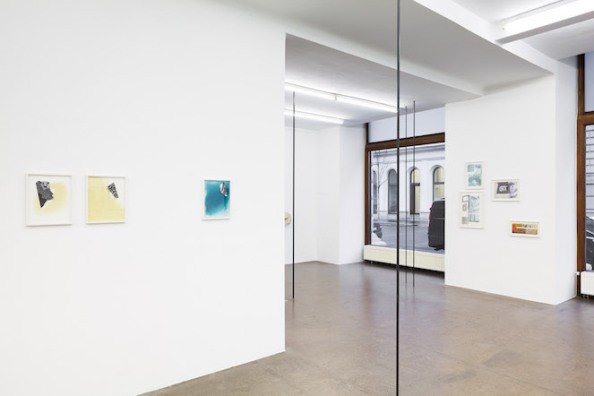 Galerie Krobath's current exhibition focusses on various approaches to collage, featuring works by several artists represented by the gallery. An array of visual strategies in which bodies play an important role, either by their presence or their absence, as well as the fragmentation of everyday life are crucial to the idea behind this show. Each artist explores how perception and the characteristics of materials lead to collaged works of art. Several contributions deal with the folding of fabrics and textile patterns, underscoring a noticeable absence, or fragmentation of bodies.

Sofie Thorsens' collages are the result of her work, over several years, with Japanese room- divider screens, kimonos as well as the art of folding. Japanese decorative arts contain clear architectonic elements and she uses these elements to react to spatial and socio-dynamic entities. The artist brings them into a dynamic relationship with each other through two-dimensional collage and three-dimensional assemblage in the gallery space. Parts of a kimono, for example, are visible as fragments of a photograph in a collage, while the real thing is also mounted on poles in the gallery space. By doing so, the artist highlights the relationship between two- and three-dimensionality, which is especially evident when a two- dimensional object is folded, bringing it into another dimension. She also poses the question of where it should be positioned in a space: in one case, for example, referring to Yves Klein's work. In 1956, Klein presented his first blue monochrome painting on a metal pole. Pieces of fabric that are both in the collage and on the pole stand for the absence or covering of a body, while the fields of colour in the collages function as place holders. The colour factor is also significant on a spatial level as the placement in the room provides an example of how colour functions in three-dimensions.

In similar manner, Katja Strunz' collages also deal with folding, although her works are generally two-dimensional. An important theme in her work is the relationship to Modern, Constructivist and Minimalist forms which subdivide a space, thereby re-defining the dynamic of the art in the room itself. This is especially palpable in Strunz’ objects in how they divide the exhibition space while also creating geometrical fault lines therein. Each line, which is also a fold, marks a break or crack within a collage. These are then combined with text as starting points for various interpretations of the work. Here, two collages contain the phrase “open the past”, which can also be interpreted as opening, a fold in the space. Strunz makes use of an approach familiar from 20th century abstraction in a manner that is very contemporary, interacting with the space while posing the question of how variable multi-dimensionality can be. On the other hand though, her work is presented between that of Jiří Kolář and Jiří Kovanda as a link between the older and younger generation of Czech artists, which, at the front of the gallery, then leads to Dominik Lang's contribution.

Jenni Tischer's work takes a clear political stance in a collage that refers to the foundation of one of the first American unions with female leadership, the International Ladies' Garment Workers' Union. In 1909, the first strike on record against the exploitation of women and the perilous conditions under which they had to work in the garment industry, took place. It paved the way for numerous strikes. Tischer uses a historic image from an archive of a woman on a picket line and combines it with images that she copied using pins on to grids on to patterns for making clothing, connected, using numerous lines, to various visual axes. The resulting fragmentation juxtaposes the development of digital codes with the history of textiles and the impact this had on the bodies of the women working in those factories.

Works by three Czech artists from three different generations have combinations of images and text as part of their visual compositions in common, resulting in fluidity between layers and interaction between cognitive and visual metaphors. The most well-known participant in the exhibition is Jiří Kolář, who created, from the 1950s on, what he called Chiasmages. These collages were in the tradition of Modernist Lettrism. Kolář was already established as a poet, so his use of text fragments in visual compositions comes as no surprise. Where collage and assemblage meet is, in the work of all of the artists in this show, often fluid, as seen here in a boat-like shaped Chiasmage. Bits of text are carefully arranged so that their legibility is of secondary importance and, in the context of the entire piece, they form a structural ornamentation. Another important aspect of Kolář’s collage work focussed on bodies, both realistic and sculptural, arranged on long, thin strips of paper, or the reflection of parts of bodies at the centre of a picture to distortional effect.

In contrast, Jiří Kovanda takes different approaches, not limiting himself to specific formats in his free-wheeling use of text and pictures. Kovanda developed what became his characteristic combination of collage and assemblage in the 1990s, using found objects and parts of pictures realised by friends and colleagues, which he combined. Galerie Krobath is able to present both older and more recent collages by the artist, including his most recent piece, completed in 2017 on the occasion of a visit to the Július Koller exhibit at mumok. All of his collages feature the logo and letterhead of the museum, thus making the work look like an invitation to a show. A photograph of Hans Schabus’ Café Hansi is also clearly recognisable; otherwise, he made spontaneous use of what he had, such as fragments of female bodies from popular media.

Dominik Langs's work has its roots in his examination of his father, Jiří Lang's estate and oeuvre in general. Lang senior worked in the 1950s Modernist tradition. He died while his son was still in his teens, leaving a large number of unanswered questions for his son. For a number of years, the young artist has been examining his father’s legacy as a sculptor who mainly worked with plaster. Dominik Lang constantly deconstructed and evaluated those works to create something very much of his own. The collages on view show how Lang makes use of portraits, including his father's sketches together with plaid, folded fabric, thereby dealing with presence and absence not only in reference to a physical body, but also as a way to work with his father's art.