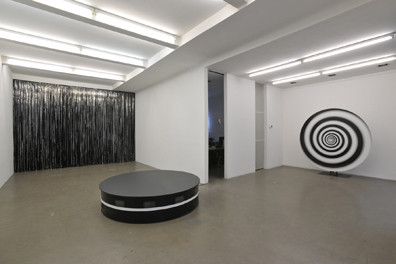 Visitors enter a stage-like space where their gaze is dictated in various ways, sometimes causing them to abandon their role as spectator and become a protagonist in the scene. They stand in front of a motorised revolving stage, which itself is positioned opposite a rotating spiral. A photograph hangs on the wall to one side and directly in front, there is a wall covered by a black tinsel curtain that glitters in silver. The stage and the throwing knives, which are placed close to hand in a white leather strap, also continually rotate. The ensemble alludes to the possibility of an armed fight or perhaps a classic knife-throwing act. However, the viewers do not enter the stage, the battleground of power. Instead, a lesbian-queer choir starts up and reveals itself as the main protagonist in the scene. The choir is visible in the photograph, where they are engaged in a choreographed, orgy-like scene. Due to the knee-length wigs that cover their faces, they appear like a mishmash of intertwined bodies and hair. Individual personalities temporarily dissolve and merge into a single ecstatic group; a kind of collective subject that has abandoned its commentator role and viewer status takes over the scene.

In its extraordinary artistic quality, Katrina Daschner’s work is also daring. Daring in the sense that the artist opens herself up, creating pieces that are extremely personal and intimate. In short, they are about sexuality, female sexuality and lesbian sexuality. Time and again her works explore the themes of temptation and desire, watching and being watched, closeness and distance, and female sexuality as a separate and consciously created domain. She handles these issues playfully, varying them, delving deep into them and sensually presenting them. Although the content of Daschner’s work is very personal, its presentation is rigorous and precise. The pictures are erotic and humorous, shocking and penetrating, loud and still – but never awkward. Viewers only become awkward when their imagination plays on what is illustrated before them. Daschner’s art is committed, but not edifying. It cannot be interpreted. Her works have something abysmal about them that should not be sugarcoated. She expresses this explicitly: This art is not about pain and sorrow. Even from the deepest abyss it shows ways to freedom – a freedom to be enjoyed. Her art is filled with a dark and subtle humour, something rarely encountered today. Daschner’s works should be regarded as games – games that lead to freedom; the playful interaction with them brings freedom. They are not educational plays; they are games that invite the viewer to play. She encourages the viewer to wander lightheartedly through the abyss and playfully overcome any hindrances they encounter. Children do this. Some grown-ups have forgotten how to do it.