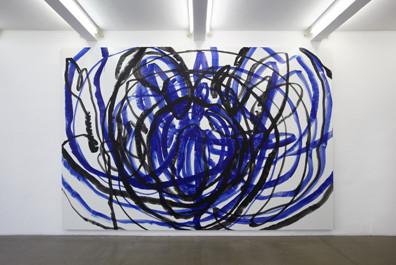 Otto Zitko’s art ingrains itself onto the mind of the viewer – each and every one of them. Because in Zitko’s works seemingly chaotic lines dart across the surface and merge, twist and tangle to form images. These images contain the same qualities that Jean-Luc Godard looks for in a good film: a beginning, a middle and an end – but not necessarily in that order.

In the preface to his book “Otto Zitko - Me, Myself and I” Tom Trevor tells the story of a little boy who had been told to practise his handwriting in an exercise book, but his hand slipped every time he put pen to paper: he was obviously more interested in going beyond the limits of the paper than trying to create beautifully formed letters. “Of course it would be quite wrong simply to characterise Otto Zitko’s practice as the unfettered outpourings of a primitive, childlike urge”, explains Tom Trevor. “Long after mastering the written word at school, as a teenager, Zitko learned to draw by copying photographs of works by Dürer, Rembrandt, and Tintoretto, amongst others, as well as by making studies from nature. Later still, he began expanding his drawing practice, step by step, from small works on paper to large­scale panels, only eventually graduating to the cavernous, immersive space of architectural interiors.”

“Me, Myself and I” – the book that is set to be launched at the opening of Otto Zitko’s solo exhibition at Krobath Wien – is a documentation of three recent elaborate wall drawings: Hamburger Bahnhof (Berlin 2009), Premium Point (Bucharest 2009) and Arnolfini (Bristol 2010) where Zitko’s works, which encapsulate his omnipotent gesture, are juxtaposed with a series of small format “writing-drawings” by Louise Bourgeois.

The work at Arnolfini Bristol is essentially the exhibition at Krobath Gallery in Vienna. In Bristol, Zitko’s lines stretched across three floors; Krobath Gallery will present two large-scale panels that were part of the graphic intervention into the architectural space of the Arnolfini. The exhibition will also feature a series of small-scale panels, which were the colour studies for Zitko’s expansive wall drawings in Bristol. The relationships are thus shifted: the drawings become the wall and the wall becomes the drawing.

Zitko’s work could also be described as a process of condensation – condensing a three-dimensional work into the second dimension. “They don’t represent the installation per se”, Jan Avgikos wrote about Zitko’s panels, “but they distil the polarities of experience that characterize Zitko’s installations.”

There is also a new wall installation by Otto Zitko at the Museum Moderner Kunst, within walking distance of the Krobath Gallery. This drawing intervention into the spatial ambience of MUMOK is part of Karola Kraus’ exhibition “Museum der Wünsche”.