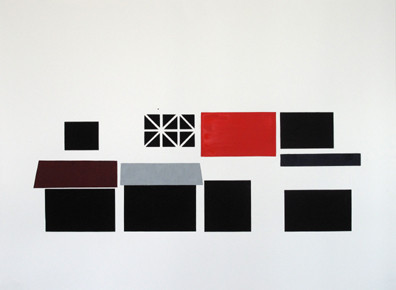 Dancing to Jazz, liquor in the wee hours,
And with the dawn a flood of tears for the dancer...
Vast Tokyo is too small for love,
Fashionable Asakusa, secret trysts...
Long-haired Marxist boys, ephermal love of the moment...
Shall we see a movie, shall we drink tea, or rather shall we run away on
the Odawara express?

In 1929, Shinpei Nakayama composed "Tokyo March", one of the first jazz songs of Japan, which sold more than 300 000 copies in the first year alone. Highly controversial and banned because of its representation of the Tokyo nightlife, the song became the anthem for the progressive Japanese modernism. Japan's Jazz Age was a brief period of intense debate, curiosity, openness, and architectural and artistic freedom, in which fragments can still be read on the facades of Tokyo.

In this exhibition, Sofie Thorsen follows up on the layout drawings of the facades of the Ginza, the traditionally most innovative and still important shopping street of the city. They were made between 1930-31 by Kenkichi Yoshida, artist, designer and co-developer of Modernology, a theory that is based on the experiences of the great Kanto earthquake of 1923. The drawings are an analysis of the existing façade compositions and focus particularly on commercial – Western as well as Japanese – typologies, which appeared in the form of neon signs, signboards, and shop windows and which are made readable in an abbreviation. Similar to the later Pop art, commercial life was seen as a feature, as an experimental field, and last but not least, as a stage for modern life. With the camera, Thorsen zooms into these streets, takes details, enlarges, reduces again, showing graphic overlays as well as architectural details, which are characterized by a huge variation. The individual images are shown in the slide installation "Tokyo March", which analogous to the lyrics consists of four chapters played in different rhythms. The second focal point of the slide installation reassembles the photographic archive material further deciphering the meaning of the drawings. The pictures are so blended into each other that they set the architecture in motion. Thorsen breaks out the structures behind the abstraction in order to track down the architectural ideas of this drawn row of houses. Only the individual architectural detail of the façade, singular and in itself significant, is in b/w lit on the wall doubling the concept of the façade. This complex image plane is not only a reconstruction of the facts, but makes the readable and non-readable façade mutually interpretable.

The "Signboard" architecture (Kanban Kenchiku), created after the earthquake of 1923, consists mainly of a small insignificant building with an elaborate, mostly colored façade facing the street. Thus the drawings in the second part of the exhibition are related to still existing houses, which, in analogy to the façades of the drawings by Yoshida, evince the new architectural typology of the time. Thorsen prescinds this architecture and identifies certain elements of the façade with colors, creating a two-dimensional ensemble of basic shapes, which from today's perspective ties in with the Modernology of the 1920s. Through the drawing, seen as an analytical element that extracts and makes visible the different levels or overlays of architecture, she highlights the exemplary character of the individual architectures.

How are cultural, economic, and political parameters inscribed in urban, spatial or architectural design? To pursue this question, the exhibition brings together three different narrative levels that like a post-modern novel open up the original drawings, situating them in a cultural and historical context. They combine past and present, reality and fiction, in order to expose the cultural circumstances behind the pictures as well as to allow the reinterpretation of built history. The built space is always revealed as a political space that implies certain orders, values and relationships between people opening up desired models and depicting a vision of society.