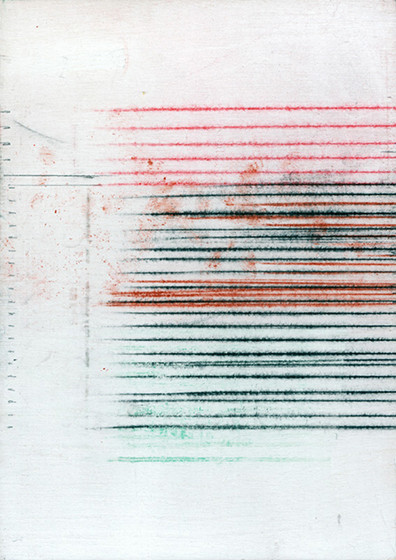 Sofie Thorsen’s work examines modernist forms which establish three-dimensional approaches or make the dispositif of “space” the focal point of reflection. Interventions into real space or visual representations of this space in Thorsen’s works redefine the architectural parameters and constructions related to those parameters.

During her time in New York on an ISCP scholarship in 2013, Thorsen started to investigate the workings of the chalk line technique. A chalk line is a tool to help mark straight lines over long distances, mainly used in interior construction work or more generally in architectural processes. Thorsen experimented with chalk lines in her New York atelier, using them in a multi-layered procedure to try and draw straight lines. The resulting works of art were recently exhibited at IMO in Copenhagen and are now on display in a solo exhibition at the Gallery Krobath.

In this exhibition, Thorsen tries to fathom the rules of axonometric projection using a chalk line. She applies this technique of descriptive geometry and uses the coordinates of key points to connect the spatial intersections of the three axes of coordinates on the walls of the gallery. Three-dimensional spaces interlink and overlap and this multiple three-dimensionality produces new spatial intersections. The starting point here is the technique of axonometric projection, which has been used in Asian art – particularly in Japanese art – for centuries. In Europe, axonometric structures re-emerged and were fairly common during the modernist period and are still prevalent in illustrations of architectural spaces, because – unlike linear perspective – they allow an anti-hierarchical, three-dimensional representation of space. These influences are also visible in Thorsen’s latest works and the lines applied directly on the walls of the gallery with black dye. Thorsen uses these lines drawn with a chalk line to visualise various spatial matrices whose three-dimensional origin can no longer be pinpointed. The multiplying, three-dimensional space alludes to Japanese screens and umbrellas, which illustrate various spatial levels and then distort them through folding and positioning. By appositioning numerous spatial networks, Thorsen creates a horizontal chain of narration devoid of a subjective point of intersection.

In addition to the wall drawings, Thorsen presents panels that are leaned against the wall, thus emphasising the two-dimensionality of the lines, which were also drawn using the chalk line technique. Unlike the lines on the walls, which are all in black, these surfaces feature various colours that were inspired by the Japanese screens. Thorsen “weaves” the individual coloured lines to create new surfaces. Her panels are a cross-reference to the three-dimensionality of the large-format wall drawings and, at the same time, they aim to challenge the spatial axes of the gallery. These panels and screens are used to conceal parts of the images behind them and also to create new image planes, following in the tradition of Japanese art. The fragmented nature of the image planes produces the vague outlines of a closet, while at the same time defying the classic structure of a screen. The artist thus scrutinises the fundamental parameters of material, line, space and surface. The subtle lines of the networks created by using the chalk line technique force the viewer to reflect on basic architectural parameters and perspective changes, and to fathom the shifts of traditional three-dimensional relations.