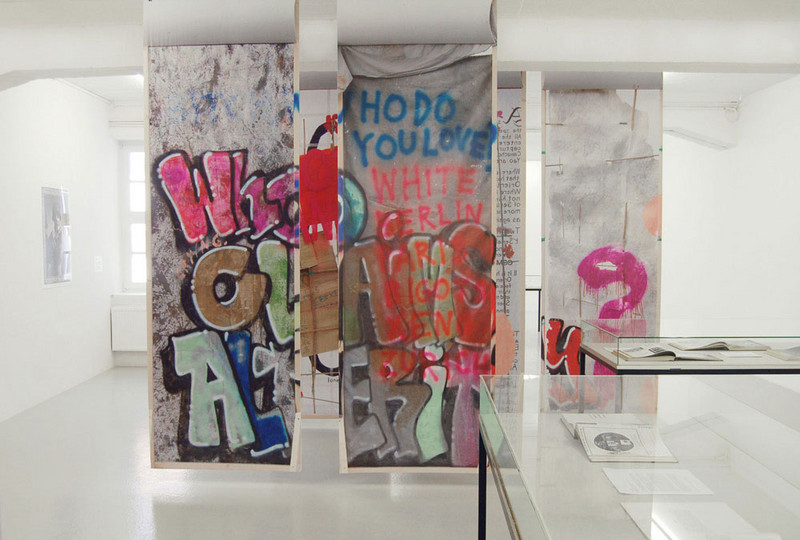 In November 1974, a publication by Lynda Benglis (b.1941 in Lake Charles, USA) in Artforum International triggered a scandal in the art world. The artist went down in history with her advertizing parody, a two-page spread showing her dressed solely in sunglasses, a double-dildo in her hand. Robert Morris (b. 1931 in Kansas City, USA) had chosen a similar self-staging when he appeared bare-chested with metal chains and wearing an army helmet for the poster of his solo exhibition at the Castelli and Sonnabend galleries in New York. Both artists had worked closely together shortly before and had already experimented jointly with photographic self-representations. Morris’s picture, by contrast, hardly provoked a response.
The Künstlerhaus Bremen is presenting the reactions to this publication alongside the images themselves in the form of historical documents that are accompanied by further selected artist advertisements. The collection sheds light on the interaction of power structures, self-representational dynamics and the economics of desire—hence exposing strategies developed by artists in dealing with this system. These mechanisms are still entangled with the current artistic production processes, yet trigger new issues today.
The Who do you love? exhibition showed last year at the Mathew Gallery in Berlin constitutes the contemporary counterpart to Morris’s and Benglis’s photographs. Enzo Camacho, Lisa Jo, Margaret Lee, Amy Lien, Carissa Rodriguez, Amy Yao and Anicka Yi were initially invited, most of them living in New York, but they decided to withdraw and delegate the realization of the exhibition to Lien (b. 1987 in Dallas, USA) and Camacho (b. 1985 in Makati, The Philippines). The final outcome—a replica of the Berlin Wall bearing sentimental and political graffiti—employs a parodistic tone and questions the modalities available to express a political and cultural identity in the post-1989 world. The Künstlerhaus Bremen presents a second layer of this special exhibition at in the form of a documentation that further reflects on self-representational strategies.
The framework of the show in Bremen has been provided by a research grant in New York, whereupon this ensemble of arbitrarily assembled documents and pictures is based. Encounters that took place in this context also shape the content; among them Alejandro Cesarco (b. 1975 in Montevideo, Uruguay), who presents the sole artwork in a traditional sense in this exhibition. His video depicts a conversation between a couple, indirectly discussing the thin line between the personal and the public, and constitutes the prologue to this show.
www.kuenstlerhausbremen.de