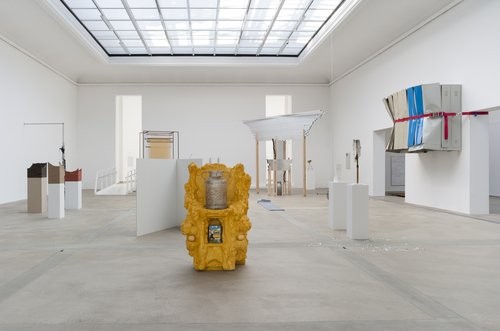 Last year's opening exhibition at Künstlerhaus KM– Halle für Kunst & Medien, titled Chat Jet (Part 1) – Painting ›Beyond‹ the Medium, gathered works that take topical approaches to a painting which, with reference to the debate on David Joselit's article "Painting Beside Itself," one might also describe as painting beside itself or outside of its original context.
After the first exhibition attempted to show the media, structures, and surfaces that painting occasionally uses, the second exhibition in this two-part series, "Chat Jet (Part 2) – Sculpture in Reflection", now dedicates itself to current sculptural concepts while exploring related content. Here, too, the focus is on ideas and context, rather than on the craft. Based on the readymade as artistic exploration of everyday (consumer) objects or on the use of industrial processes and materials, today painting, film, video, and the most varied digital source material are conceptualized and used — in the sense of an extension of autonomous sculpture — as equally important components of sculpture. Emerging to the same extent is a reflexive practice with regard to the exhibition space, along with the philosophical and mediatic discourse that extend beyond this space.
Since theory has called the concept itself into question and the generally powerful pressure for the self-justification of individual art genres, an essential component aspect of the conception of “Chat Jet (Part 2) – Sculpture in Reflection” is how sculpture as a nevertheless ever present artistic form of expression can on the other hand distinguish and establish itself if it is exposed to these great media challenges. Anyone who works with sculpture today faces the questions of the sculptural means of representation, and actively and in an exemplary way promotes their constant re-development. The multifold work and analysis with the sheer infinite repertoire of forms, material, (art) histories and their availability, the diversity of relations and references in increasingly receding resolution from once clearly defined dependency relations between the carrier medium and art production (key word, the readymade in times of cheap, three-dimensional reproducibility by 3D printers) lead to important questions for the exhibition: what do these changes in network conditions of digital culture mean for objects generally, and how can sculpture remain relevant in a virtual world? In the process, however, always also repeatedly to come back to the basic questions of sculptural approaches of how something is made or formed, what artistic decisions have been taken and why the close observation of sculpture fosters the lasting desire to touch it, appears to be controversial and worth investigating here.
“Chat Jet (Part 2) – Sculpture in Reflection” is conceived by Sandro Droschl and Christian Egger.

A concluding symposium is planned for 2015 in the context of which the comprehensive catalogue documenting both exhibitions will be presented.
The exhibition will be accompanied by an events programme that goes into aspects of the exhibition in discussions with artists and in lectures every Thursday evening.
www.km-k.at