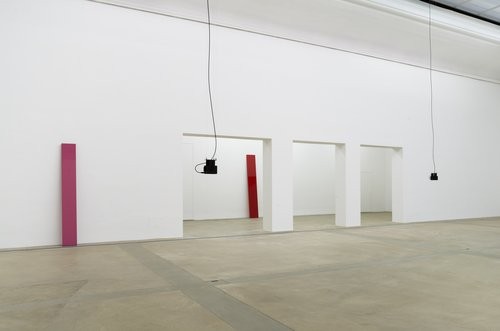 This exhibition presents two complementary, yet significantly autonomous positions in a dialogue with each other: Florian Hecker’s, the German artist and computer composer (born 1975 in Augusburg; lives in Edinburgh and Vienna) and the American sculptor John McCracken’s (1934–2011). The show probes the experiential capacity of the largest space—a white cube—at the Künstlerhaus, Halle für Kunst & Medien. The sculptural, luminous, monochromatic Planks by the late artist are displayed between the floor and the wall of the building, denoting gestural, modernist exhibition concepts through the work itself and the process of viewing. Simply leaned against the wall, they can be identified as a hybrid transition between painting and sculpture. McCracken began work on these key pieces in the mid-1960s; he felt that the Planks existed between two worlds—the floor, on the one hand—which for him represented the physical world of solid objects (trees, cars, houses, people, etc.)—and the wall on the other, which he thought of as the world of imagination, a space for illusory imagery, but also for human cognition. In addition, the artist also considered them communicative, pure forms whose persistent themes are their own surfaces, structure, and temporary presence. Asked about the effects of the pieces, McCracken once briefly noted in his journal: “A successfully abstract sculpture will tend to make the space surrounding it abstract too.” (1)
In a sharp, even more abstract counterpoint, Florian Hecker dramatizes space, time, and the perception of sound through his computer-generated sound pieces under live exhibition conditions. The structures of his compositions unfold in a specific constellation of loudspeakers hanging from the ceiling. Series of sometimes pointillist, sharp, extremely dynamic, specifically acoustic experiences simultaneously evoke sensations, memories, and associations of three-dimensional, unpredictable intensity. Viewer, sound, and the exhibition space itself, whose auratic definition has been pierced, become an amalgamation, which does not provide any ideal perspective of the compositions, despite all of its formal and structural clarity.
In combining the works of Florian Hecker and John McCracken, the exhibition defines a framework in which it becomes possible to have an aesthetic experience of the shifting boundaries and intersections of sculpture and sound as they affect each other inside a space consisting of geometrical, architectural formations, as well as temporal and subjective formations. At the same time, one becomes more sensitized to their conditions, qualities, and degrees of intensity. Here, Hecker presents the protagonists of his synthetic works in the phenomenological gray zone that opens up amid various conventions of musical psychology and psychoacoustics; “a zone where,” according to the philosopher Robin Mackay, “the coherence of experience is breached; where objects can exist in multiple places at the same time, where events are smeared across space, where streams of experience diverge, coalesce, and fracture, a world where the conditions of objecthood are tested in a manner that is best qualified as 'hallucinatory.’” (2)
Thus, McCracken’s and Hecker’s artistic positions potentially reinforce each other, coming closer together precisely at a point where it seems possible to leave the physical place—the Künstlerhaus, the Halle für Kunst & Medien, the context of discursive, institutional, social experiences, or the theoretical concept.