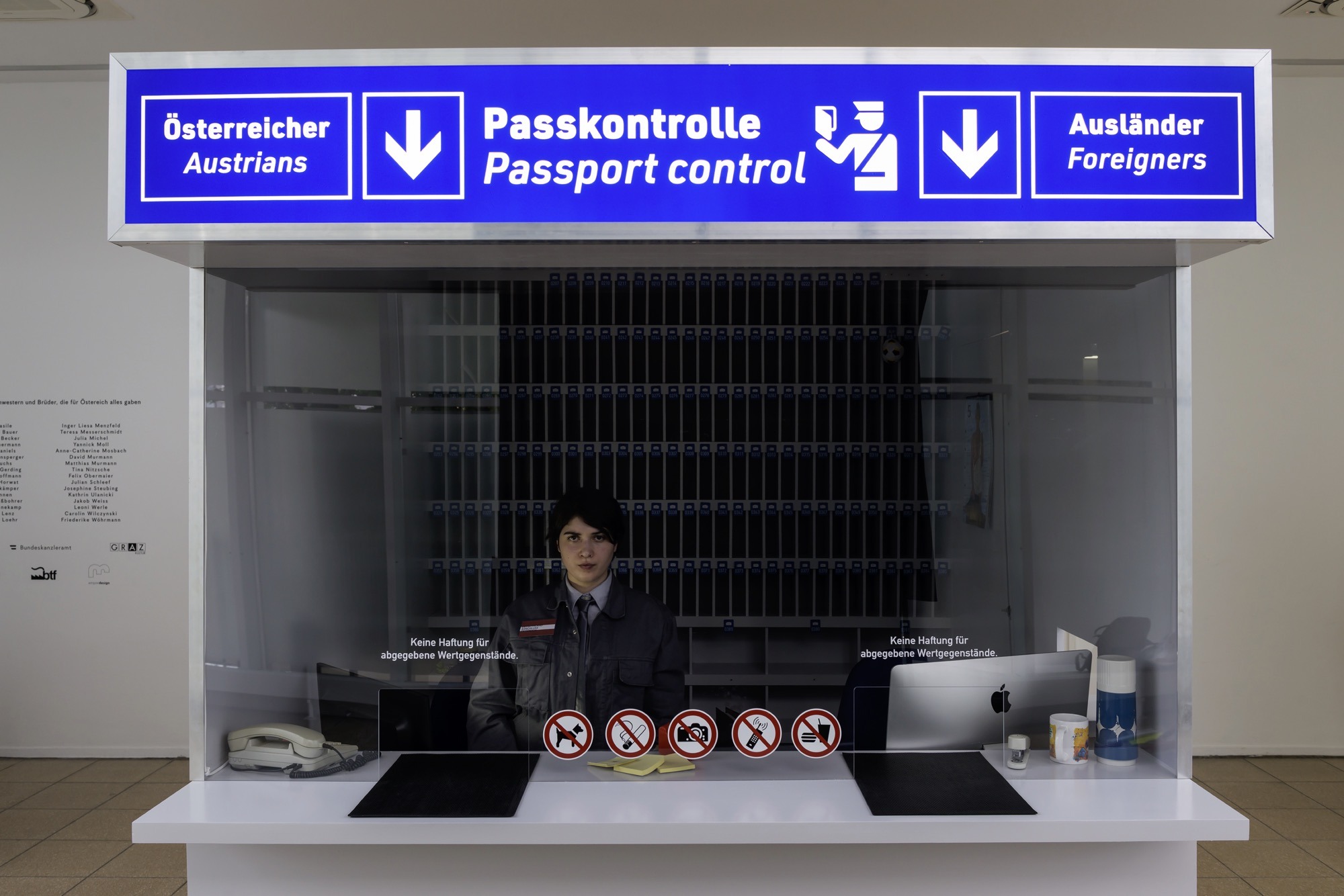 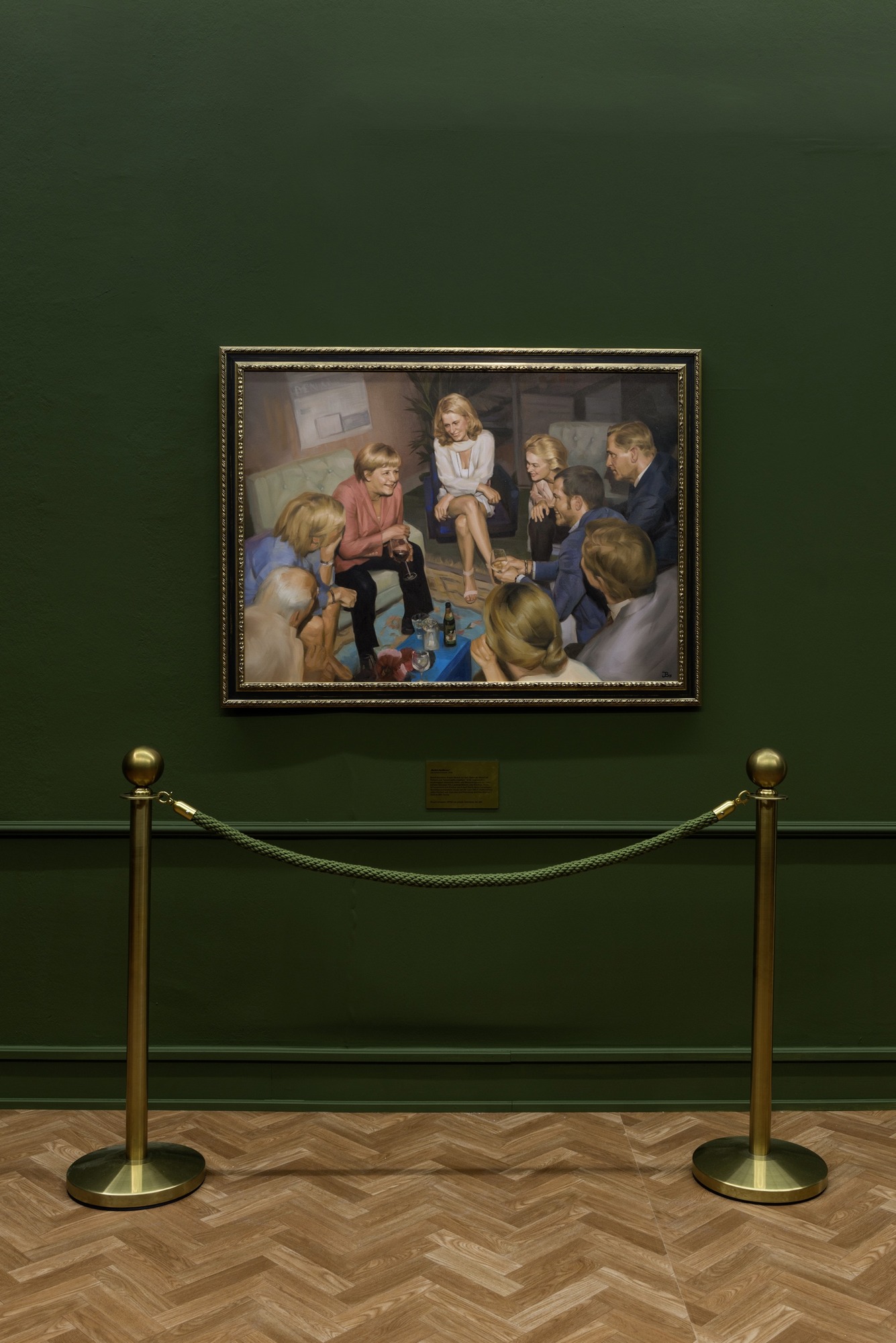 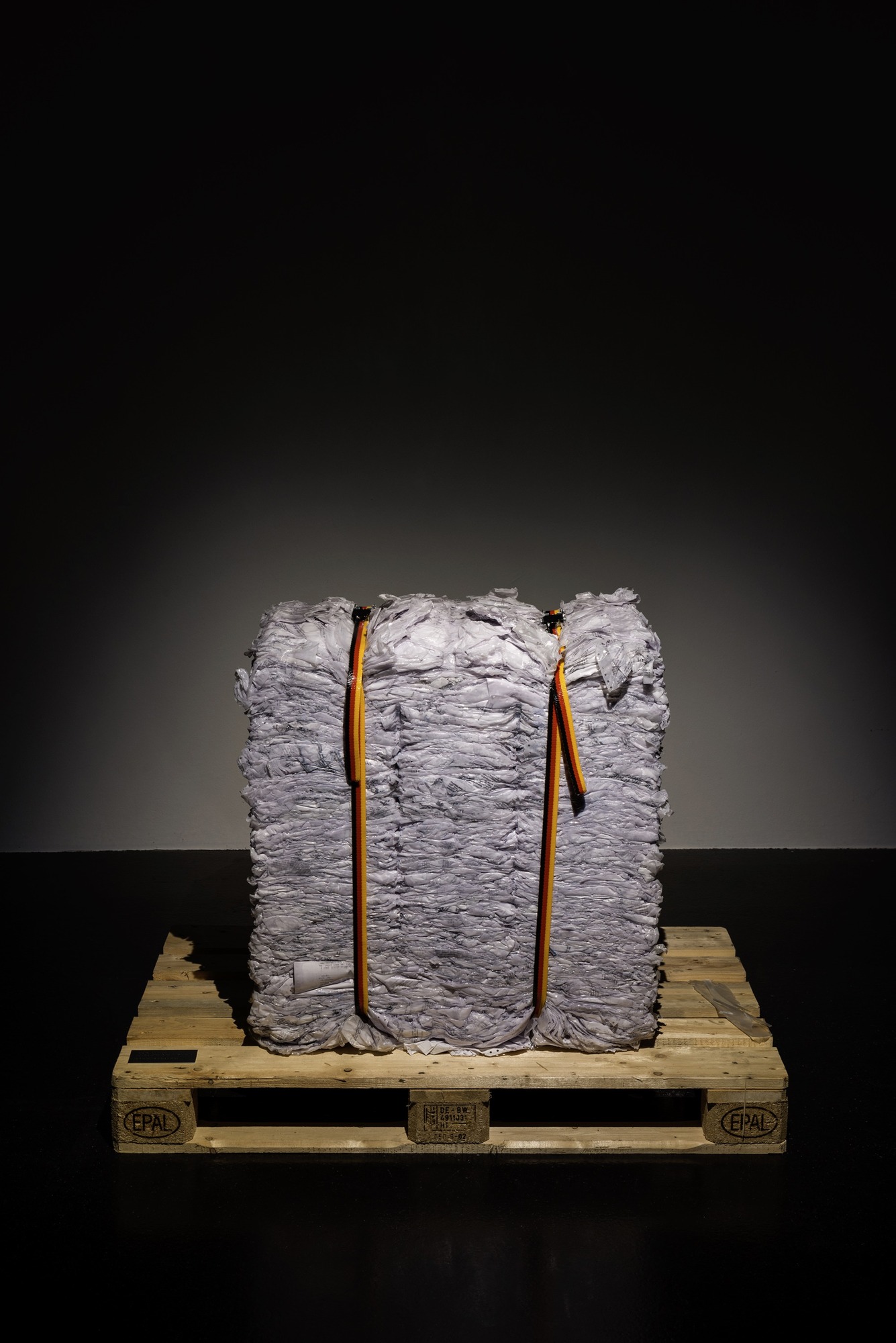 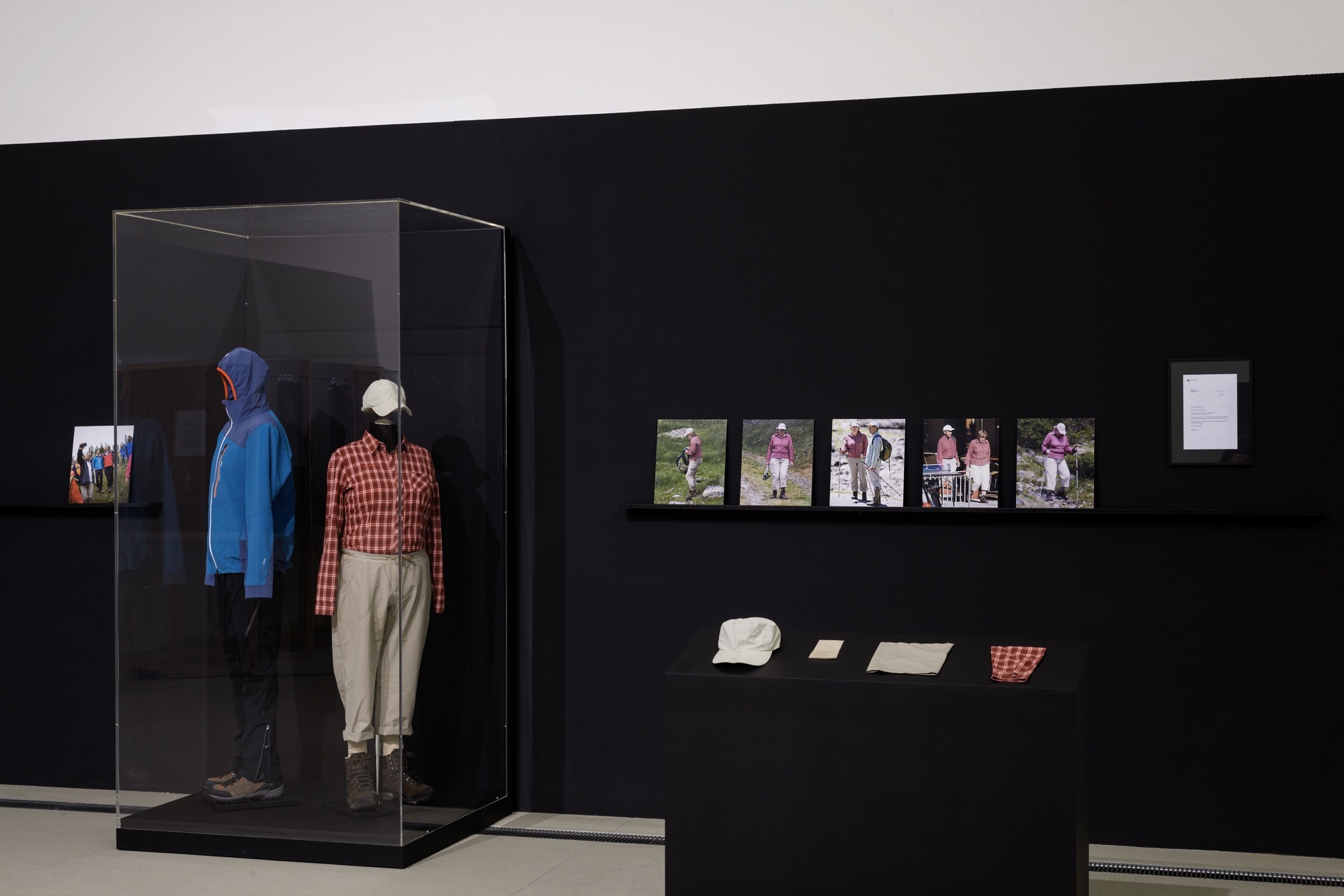 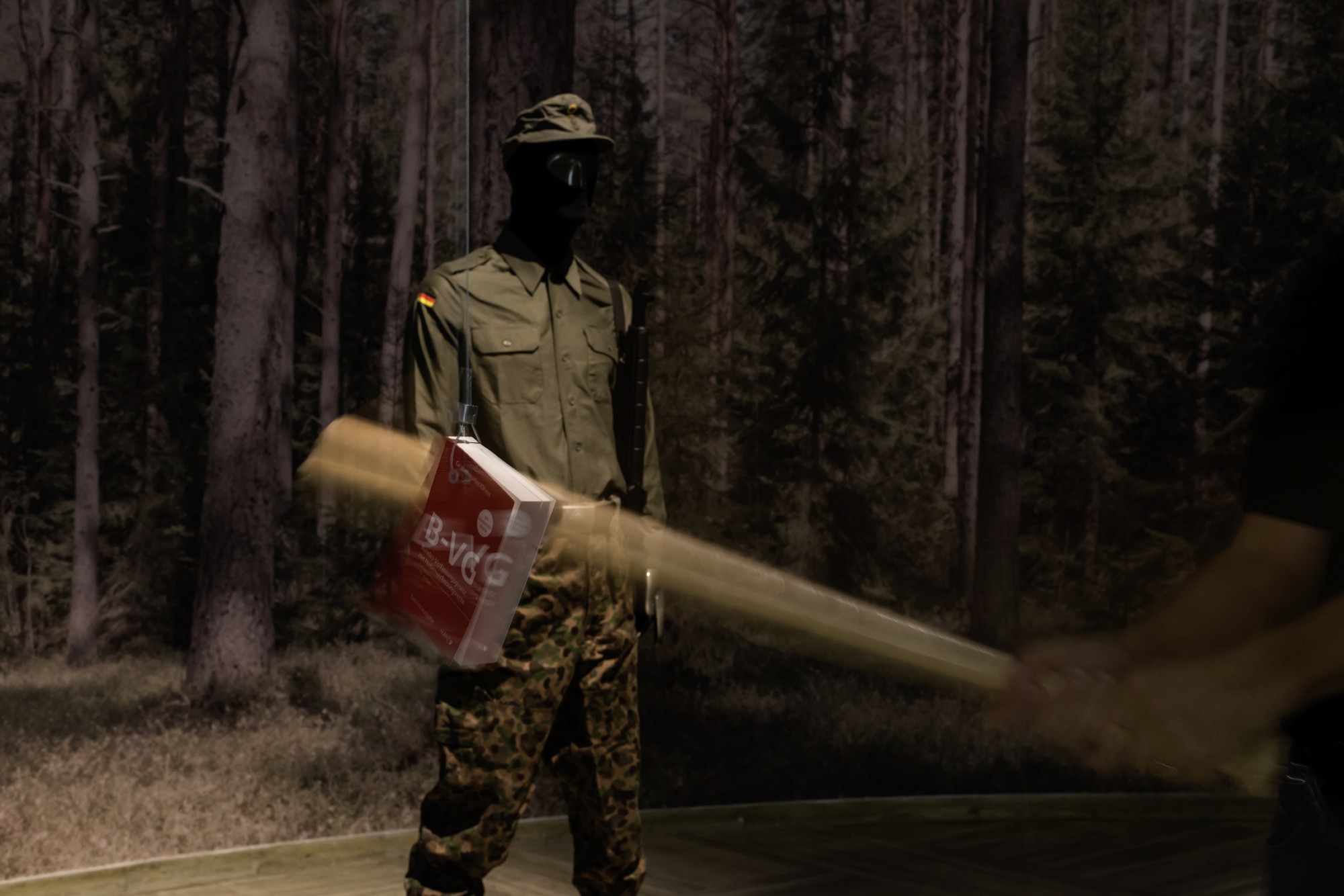 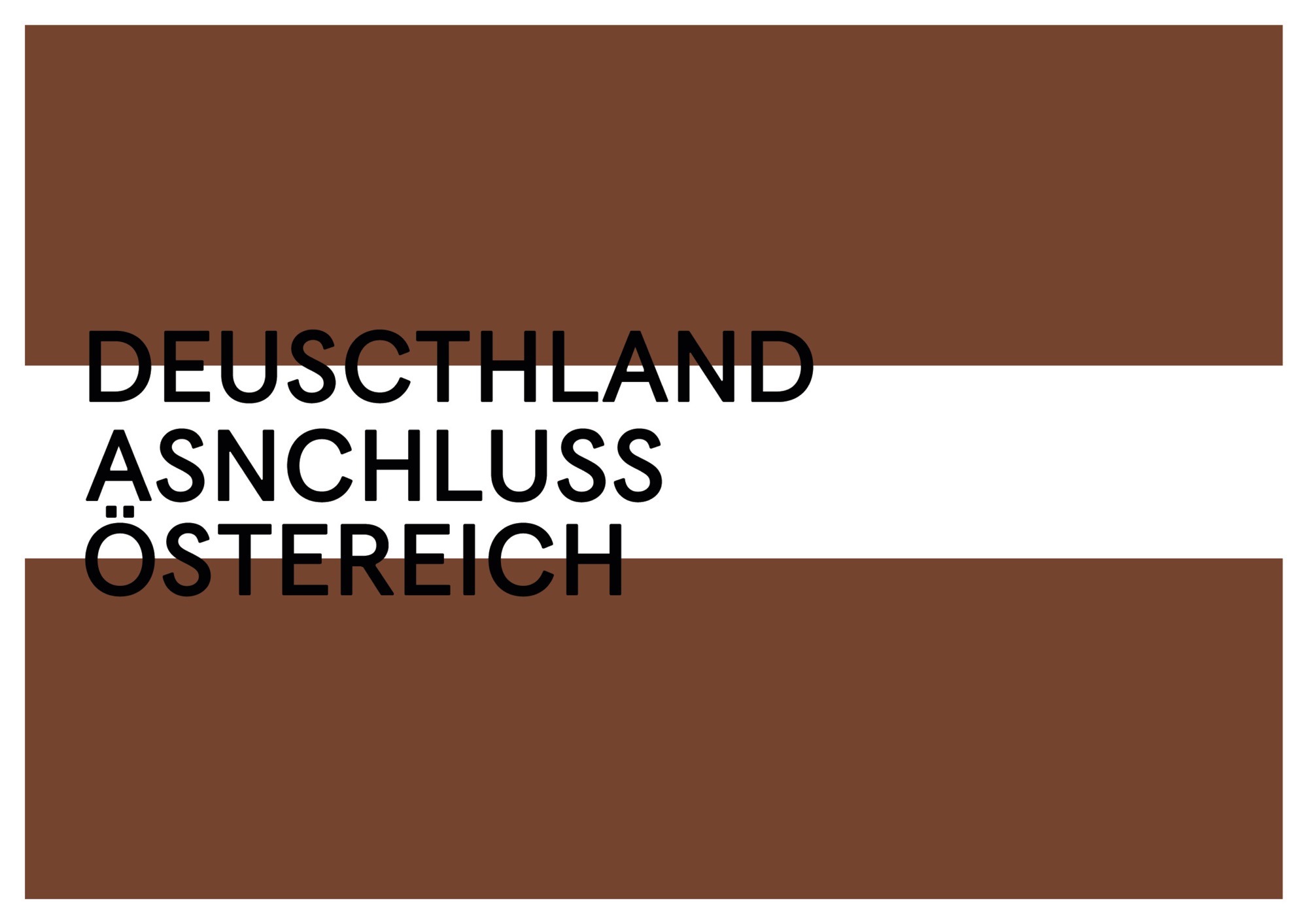 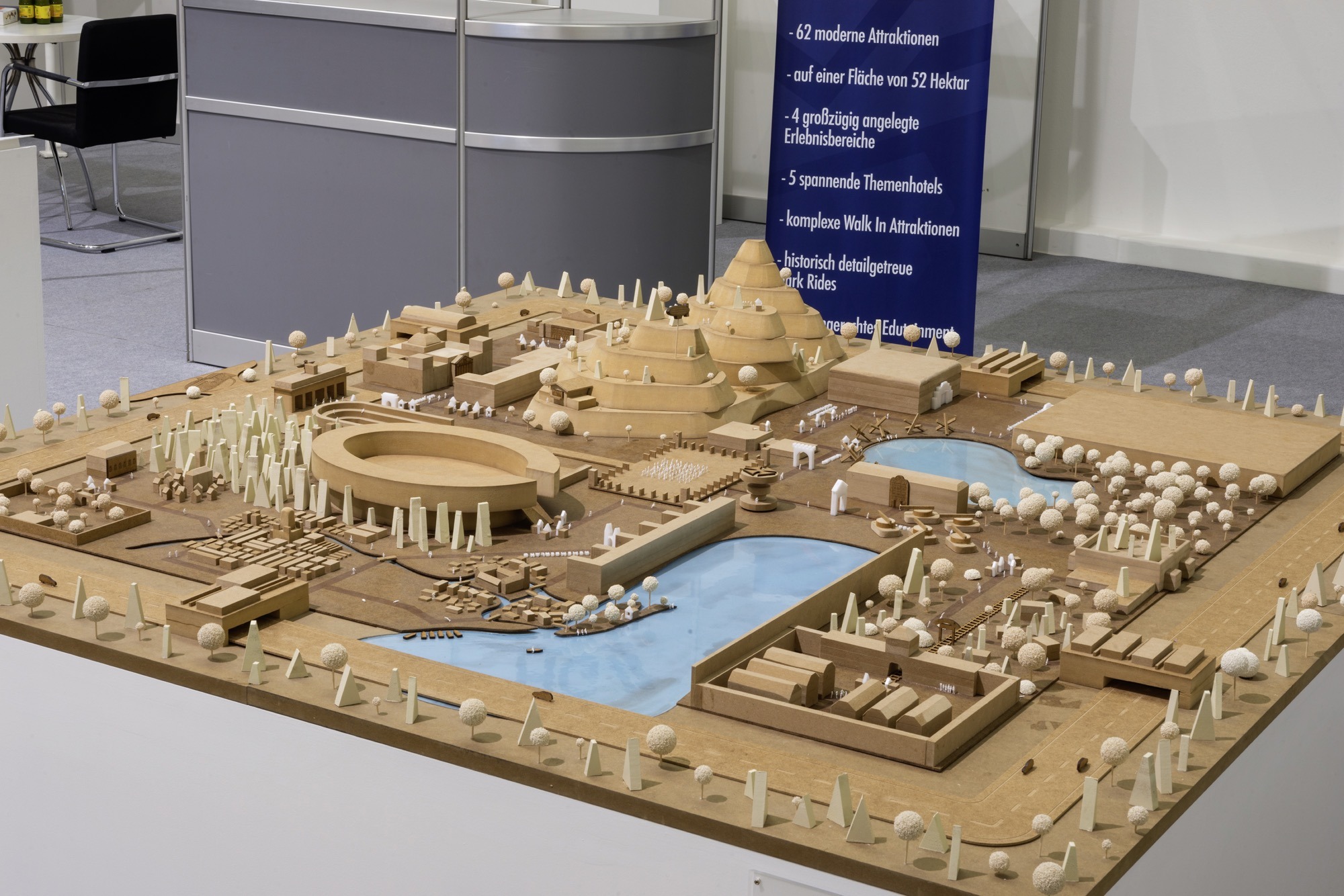 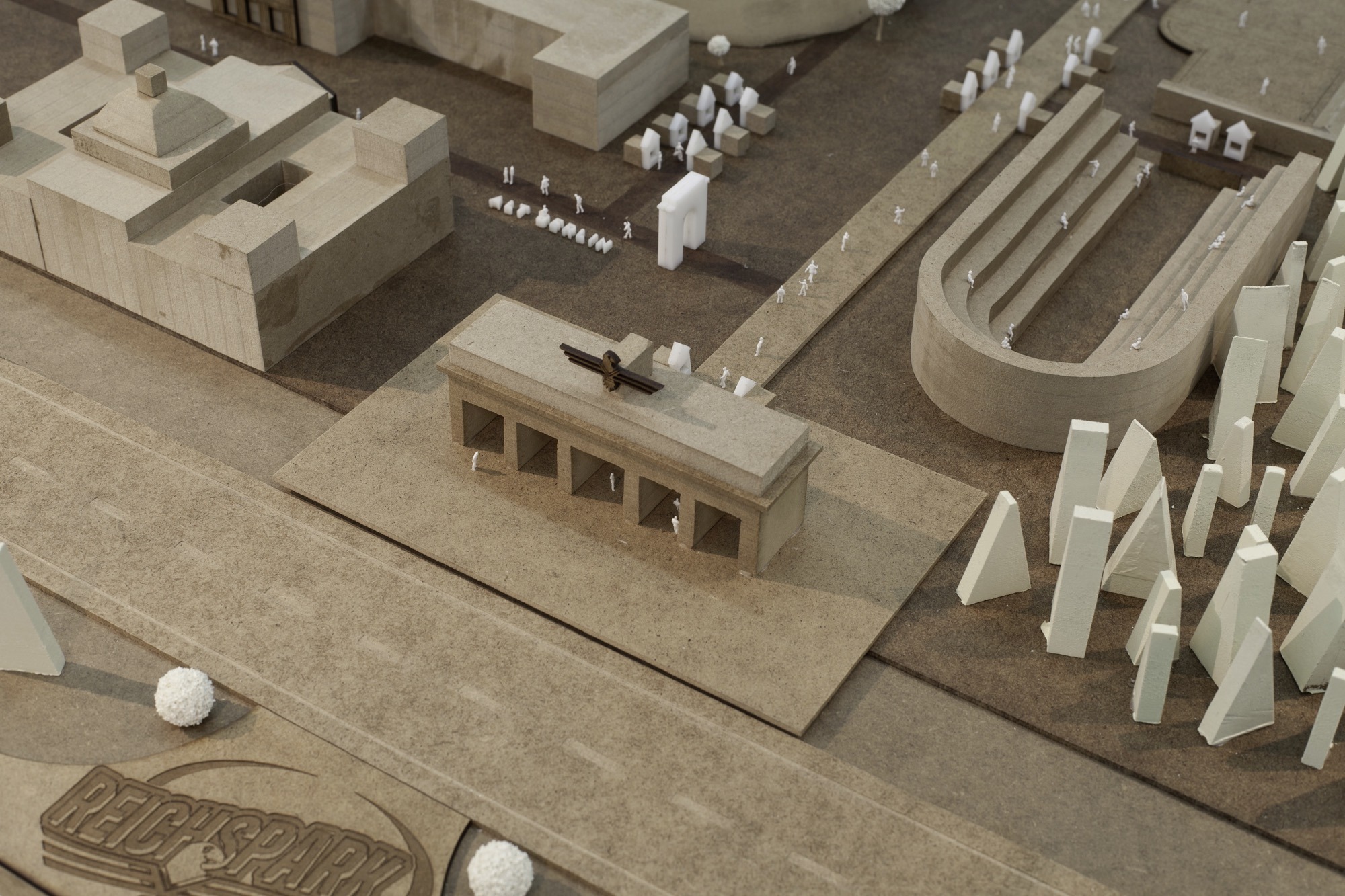 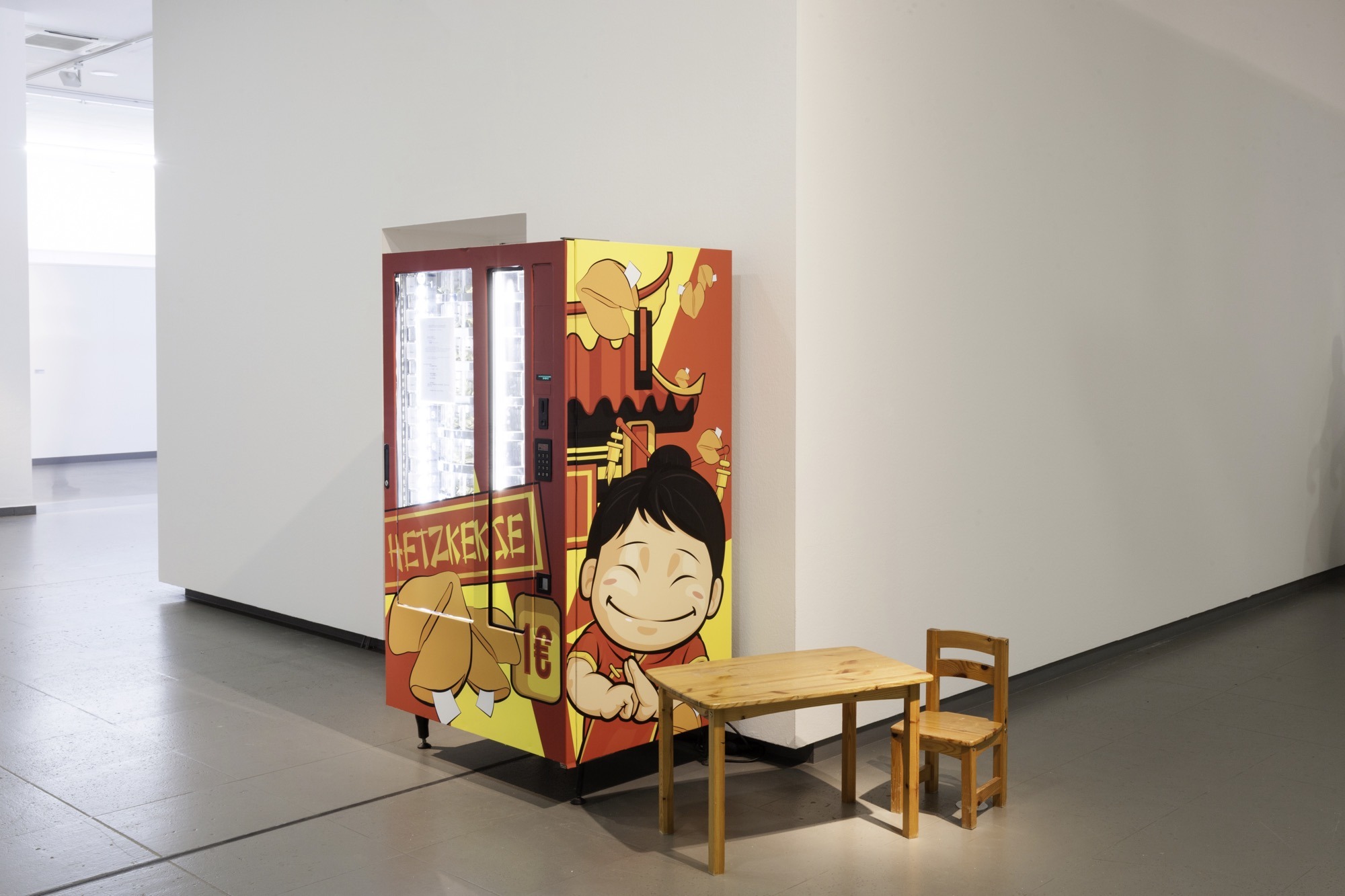 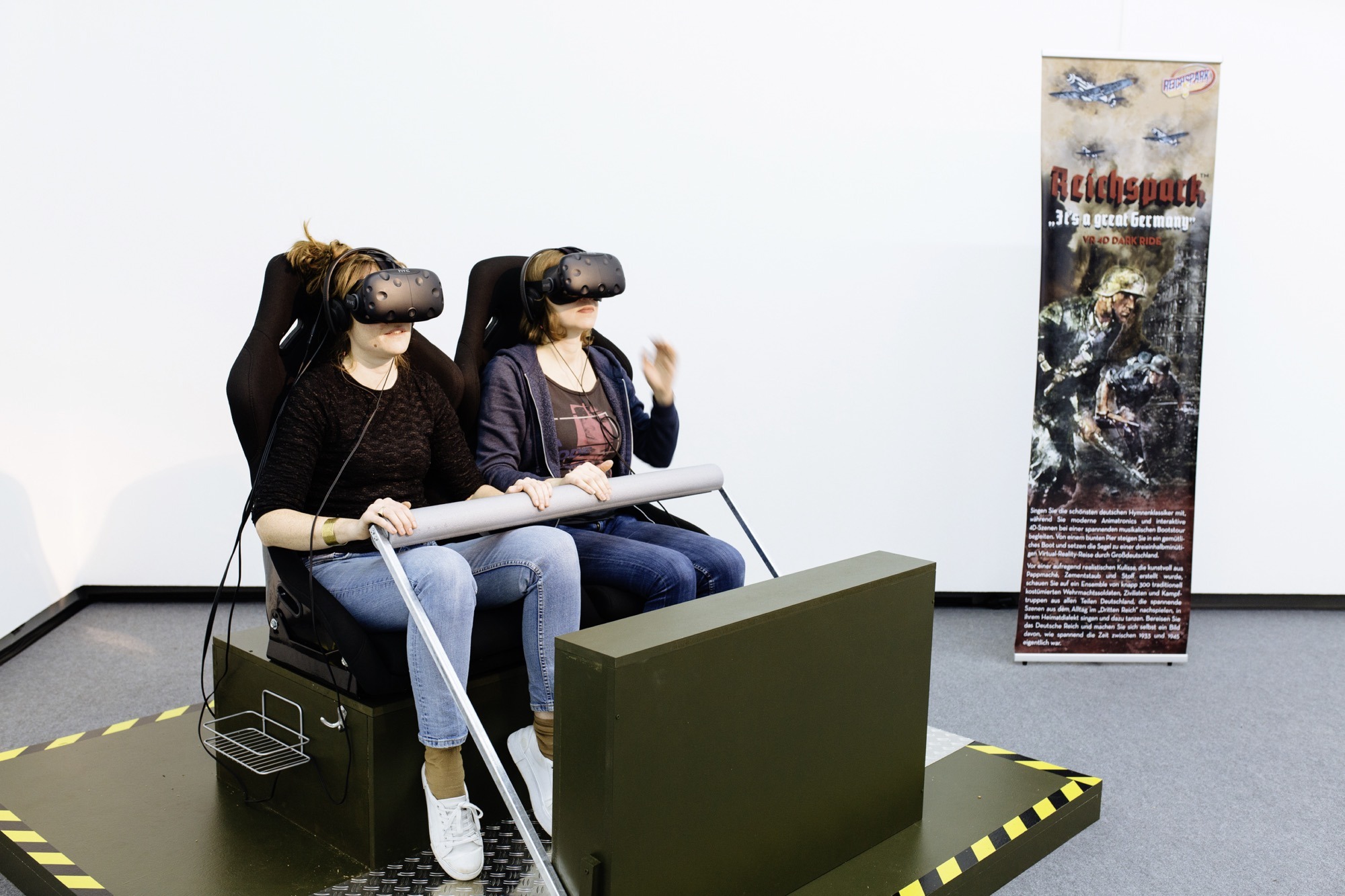 Jan Böhmermann und btf, Deuscthland, NRW Forum, Düsseldorf, 2017/2018
Foto: Felix Obermaier, Anne-Cathrine Mosbach
Besides his examination of social and political questions, Jan Böhmermann again and again focuses on the boundaries of satire and its place in the cultural sphere. For the project "Deuscthland#ASNCHLUSS#Östereich," Böhmermann concentrates his cumulative lapses in concentration on the identity of the Republic of Austria and its “motherland” Germany (direct quote of Böhmermann)—and questions the political and cultural status quo in the country that we call home with a proper amount of black humor. With the exhibition in Graz, Jan Böhmermann and his comrades-in-arms at the production company btf GmbH expand their successful installation "DEUSCTHLAND" (2017, NRW Forum, Dusseldorf) toward the southeast.

As one of the fundamental ideas of democracy, freedom of expression is also increasingly under discussion in Europe as a result of populist and antidemocratic movements and hence must be defended. Satire is a genre that is based on provocation and thus frequently sparks controversies: since the attacks in connection with the Mohammed caricatures in the Danish daily newspaper "Jyllands-Posten" and at the latest with the assaults on the editorial department of the French satire magazine "Charlie Hebdo," political satire with its boundaries and delimitations has become a fixed component of discourses surrounding art and freedom of the press as well as freedom of speech.

With the exhibition "Deuscthland#ASNCHLUSS#Östereich," the Künstlerhaus, Halle für Kunst & Medien (KM– Graz) puts further emphasis on free speech as one of the highest values of our democratic civil society.

Designed as a satire of reality, "Deuscthland#ASNCHLUSS#Östereich" demands a bit of initiative from visitors and deals with the substance of the individual: the tight passport control at the entrance to Böhmermann’s “Deuscthland” and “Östereich,” the personal choice of a new identity when confronted with one’s own biases regarding class, race, or gender, up to an examination of how the historical guilt is reflected in oneself personally are only a few of the experiences in this nerve-racking show with its fast-paced ride through the virtual Nazi history theme park. For the Austrian version of the debut in the field of visual art, Böhmermann and his team have also created large-format new productions that well and truly put local sarcasm to the test. The path through the exhibition consisting of satirical, humorous thought experiments primarily strives to stimulate responsible thinking and makes reference to the political responsibility of each individual. The satirist thus firmly bears in mind the situation for art and humor in Austria: “The role of the comedian or trash-talker in society cannot be overestimated—seriously. I would seriously never do that; that is something society unfortunately has to find out for itself. In Austria—this is the nice thing—society will soon have the opportunity to find out how great the social value of artists or comedians is, namely when art and humor that is directed against specific points of view is banned or torpedoed by the government.” (direct quote of Böhmermann, kurier.at of November 18, 2018)

Jan Böhmermann (*1981 Bremen) is a German satirist, moderator, and author, and calls himself a “public juggler.” In cooperation with his production firm, btf GmbH in Cologne, he has conceived the late night show “Neo Magazin Royale” for the public broadcasters ZDF and ZDFneo since 2015. His format “Fest & Flauschig” (solid and fluffy), which he moderates along with the singer-songwriter Olli Schulz, is one of the most popular podcasts in the world on the music streaming service Spotify. Böhmermann enjoys touching on sore points and stops at nothing or nobody: the political and legal controversies surrounding his defamatory poem about the Turkish President Recep Tayyip Erdoğan triggered a large response in the international media. In the past years, his work has been awarded the German Television Award, the Grimme Prize, and, in 2018, also the ROMY.
Supporting Program: Events and Art Education

The medial exhibition experiment "Deuscthland#ASNCHLUSS#Östereich" is accompanied by a broad program of special events and mediation formats tailored to the project. This supporting program serves as a supplement to the exhibition, offers interested visitors the possibility to delve deeper into the topic, and encourages discourse as well as fantasy.

On Thursdays as of 6 p.m., the KM– invites visitors to the free event “An Art Day's Night” (AADN). In cooperation with the Schauspielhaus Graz and its Dramatiker_innenfestival the reading “Status Reports" by the Viennese author and blogger Stefanie Sargnagel takes place within this framework. In connection with the thematic background of the exhibition, the historian Heidemarie Uhl presents a historically oriented lecture on the “Annexation" of 1938, the memory of this historic event, and its effects, which are still perceptible today. In addition, André Doehring presents the international research project “Popular Music as a Medium for the Mainstreaming of Populist Ideologies in Europe,” which is dedicated to the use, role, and structure of popular music in populist movements, and makes reference to Böhmermann’s artistic work from the perspective of music analysis. The artistic director of the Donaufestival, Thomas Edlinger, and Matthias Dusini, a feature writer for the weekly newspaper "Falter," critically and pointedly discuss the current state of political correctness. A television evening shows Böhmermann in action against hate on the Web and the founding of “Reconquista Internet,” followed by the alarmingly up-to-date educational documentation “Delete Yourself!,” about hate on the Internet.

In the “Convo Club,” younger positions from political science, the mass media, and comedy have their say: discussions take place within this comfortable framework along with a sparkling cold drink. Interested individuals can also engage in satire themselves and create caricatures illustrating current news stories in a workshop with Jörg Vogeltanz. Exploring one’s own creativity is now possible at any time at the Künstlerhaus: the “KM– Lab” is an interactive participatory station in the exhibition that invites visitors to text, draw, and design. There is also an “Open Lab” in which visitors of all ages can become active in cooperation with our mediation team. At the closing event, the "One Man Kapölln," Itzo Easy, finally addresses agitprop and hedonism in the German-Austrian dialogue.
www.km-k.at