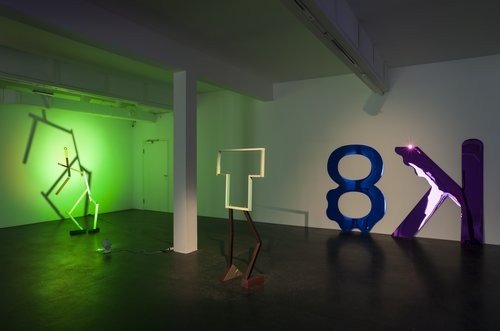 YDRAH 8K, presented by the Künstlerhaus KM– Halle für Kunst & Medien, is an exhibition of new works by the artist K8 Hardy (born 1977 in Fort Worth) who is based in New York. Hardy is a founding member of the queer feminist collective of female artists called "LTTR". She is also an editor of the fanzine "fashionfashion" and actively participates in the group W.A.G.E. (Working Artists and the Greater Economy). Her works of art garner performative energy from various fields and studies, frequently from the area of fashion, for example, and generally from current forms of representation and modi of self-presentation in digital-based social networks. In the process, she avoids committing herself to a single artistic medium, eludes artisanal virtuosity in photography, sculpture, and video, and produces as if drawing on a gigantic maelstrom of self-documentation and fashionable, queer-visionary transformation of identity.
In a video work designated as “Outfitumentary” by the artist, which is shown in the exhibition in condensed excerpts, she has been documenting her opulent and frenzied changes of clothing since 2001, along with the related signal change within a lesbian subculture and projections of yearning in general. This documentation of a quest for self-invention and the critical examination of identity-seeking and related mediatic breaches lead the fashion items being worn in front of the camera to lose significance. Also evident is the act of refocusing on the artist herself as immersed in perpetual change and the similarly shifting sites of self-documentation playing out here. This high-velocity switching of roles and the concurrent societal pressure to cultivate and express one’s image is one of the themes long explored by Hardy. This aims to challenge the role of the artist, along with the authentic embodiment of this role, within veritable capitalist systems of reproduction and the formatting of the self manifesting there. In her unconventional, artistic elaborations, which take the form of sculpture, light boxes, or photographs, Hardy is likewise concerned with lending visibility to emancipatory means and potentials. She addresses this by responding to a pressing question once posed by theorist Diedrich Diederichsen: “What purpose would it serve were we to resort to taking a union position against creative work? What could we demand without inevitably demanding everything? Only this: a renewed approach to objectifying personalised techniques, access to options for retreat that are not devoured by a compulsion to reproduce, the reappropriation of the self by way of the self, the de-economisation of the soul, the body, the presence, of sexiness; the re-politicisation, re-objectification, re-reification of capabilities, skills, knowledge.” (1)

K8 Hardy has shown her work at the Whitney Biennial, New York, PS1, New York, MoMA, New York, Dallas Contemporary, Dallas, Tate Modern, London, and at the galleries Karma International, Zurich and Reena Spaulings Fine Art, New York. The artist’s works are also found in large museum collections such as those at the Guggenheim and the Whitney Museum, both in New York.