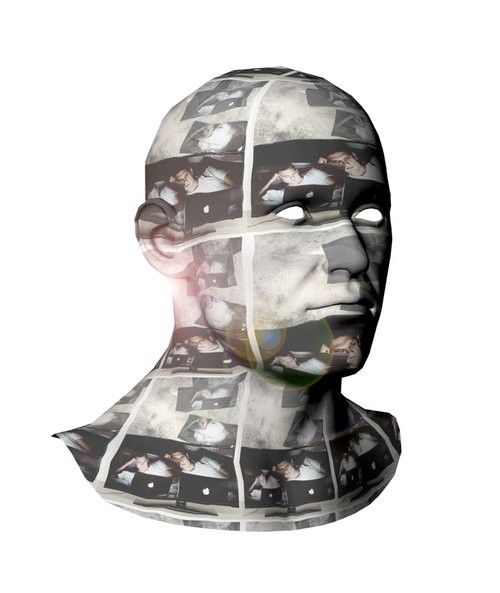 PHILIPP TIMISCHL
They were treating me like an object. As if I were some sextoy or shit. I don’t wanna see them again.
6 December 2014 — 22 January 2015

The sculptural installations of Philipp Timischl generally make use of a recurring formal device: the combination of flat-panel displays—on which video loops play—placed below equal-width canvas panels incorporating historical, text, or appropriated imagery (often arranged onto raw, unprimed canvas using epoxy).
On the one hand, Timischl’s hybrid sculptures—free-standing, or installed against a wall—allude to traditional art historical conventions such as the tableau, the Warburgian visual panel, and the diptych. On the other—in his technique of turning video displays into sculptures below 2-dimensional paintings—Timischl creates links between these historical visual conventions and the more recent visual devices of mass-cultural technology: the smartphone, the Apple product, the flat panel monitor, as well as the style and arrangement of the commercial and product display. Timischl's videos are sometimes personal and low-fi, for example when Timischl shows video footage of himself and friends on holiday in Corsica, or alternately diaristic, as when he displays footage he took of a sky at a London park.
When physically placed alongside the static, austere visual-textual panels on canvas, the works provoke questions about the viability of private experience amid our time’s unprecedented constellation of media and information imagery, the instability of the public sphere, and the often-problematic determinism of technologically-saturated media and information environments, and its simultaneous elevation and effacement of personal narrative.
www.km-k.at