Sound and Smoke – a Revue in Pictures 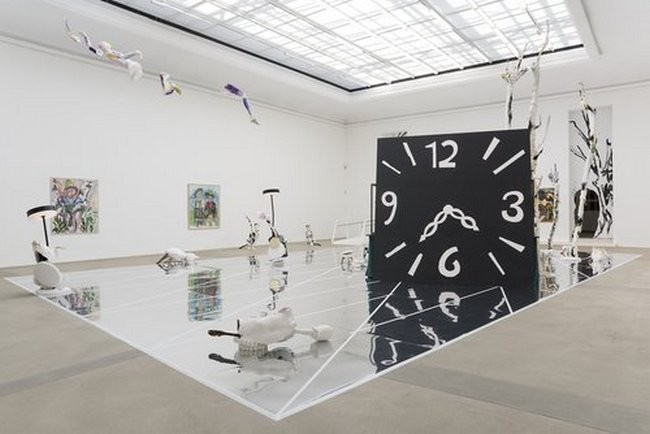 The exhibition "Smoke and Sound: A Revue in Pictures" shows newly conceived works by Stephan Dillemuth, hand in hand with some older works from the 1980s. In the exhibition, the artist creates a new way of presenting his oeuvre, setting up site-specific scenes that have a certain theatricality, as well as an alluring effect.

Visitors enter the exhibition as if they were going through a time machine—two large canvases feature infinity clocks that point to 3:30. Through the mirroring of the large skylight in the floor, the revue can be experienced like a walk-in display case from a variety of angles. Colorful body parts hang from the ceiling, but it’s only by looking at them from one specific standpoint that viewers see the image of an entire human body. Other works also deal with the principle of fragmentation. Some human body parts are supplemented by animal components, such as boars’ heads, cattle ears, and deer feet, and are tied together with cogs.

Dillemuth’s first "Bayernbilder" inspired by sentimental postcard motifs from Bavarian spa towns, were painted in 1979 during his studies at the art academy in Düsseldorf. The painting style is accordingly neither expressive nor wild, but rather unintentional and trivial. Nevertheless, by ennobling the postcard into a fine art medium, Dillemuth’s work takes a critical twist.

In the "Schönheitsgalerie" (Gallery of Beauty, 1985), featuring over fifty works, Dillemuth explores questions of representation. As a collector of portraits of beautiful women, Bavaria’s King Ludwig I insisted that beauty was separate from status and social class. Thus, the portraits of aristocratic and bourgeois beauties hung next to each other in an egalitarian way. Dillemuth’s gallery, however, turns against the idea of external beauty and how it is represented in art. The paintings, like the faces, develop a life of their own through the process of painting, which makes it possible to see a new kind of “beauty”—just in case art and beauty were equivalent.

In the apse of the Künstlerhaus, the artist will show for the first time works that were produced in the late 1980s in Chicago. The wall objects, which resemble disco decorations, glitter in the projector light of the "Portfolio Robot"—a dancing pedestal showing the video "Happy Hours" from 1988: seven looped Super 8 projections revolve amid the sound of acid house music. Is disco a “theater of cruelty”—a place where all images, whether ugly or beautiful, mean or seductive, are transcendent in ecstasy?

Again and again, questions arise about the role of the artist in society and the artistic means employed in his practice. For Dillemuth, art has the potential not only to reflect upon social changes, but to trigger them as well. Limitations, conventions, and taboos can be explored and also altered through research, reflection, analysis, and experimentation, if necessary.

The exhibition will be accompanied by a catalogue featuring essays by Helmut Draxler, Kerstin Stakemeier, and Stephan Dillemuth. In addition, Dillemuth has an extensive website: http://societyofcontrol.com.

Stephan Dillemuth studied at the art academies in Nuremberg, Düsseldorf, and Munich. He currently teaches at the Akademie der Bildenden Künste in Munich. From 1990 to 1994, Dillemuth together with Josef Strau, Nils Norman, Merlin Carpenter, and Kiron Khosla operated the space Friesenwall 120 in Cologne, then together with Hans-Christian Dany, UTV (Unser Fernsehsender / Our Television Channel. In 1995, there was the Summer Academy at the Kunstverein in Munich and the publications AKADEMIE and The Academy and the Corporate Public. Starting in 1997, his collaboration with Werner von Delmont resulted in various performances and the publication Corporate Rokoko. Since 2000 Dillemuth has had solo projects at venues such as Galerie Nagel Draxler (Cologne/Berlin), American Fine Art (New York), Galerie für Landschaftskunst (Hamburg), Reena Spaulings (New York), Galerie Éric Hussenot (Paris), Secession (Vienna), Konsthall C (Stockholm), Transmission Gallery (Glasgow), and Uma Certa Falta de Coerência (Porto).