The only performances that make it all the way … 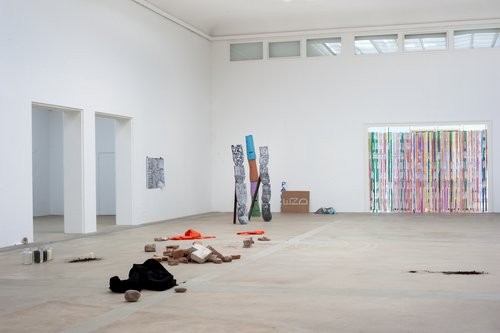 exhibition view, KM–, photo: Markus Krottendorfer
THE ONLY PERFORMANCES THAT MAKE IT ALL THE WAY ...
22 August - 15 September 2013

The series “The only performances that make it all the way ...” brings together both current and historical positions from the field of performance art. Performativity, an artistic practice of transcending borders that is widely discussed today, is never primarily geared to the creation of an enduring art object. Its potent elaborations are seen with a relatively small amount of effort in terms of production technique, often using only language and movement. Joining the exhibition on each of the four opening nights during its one-month run are two or three new works, all of which will remain in the exhibition space as objects. Therefore “The only performances that make it all the way ...” equates to an additive process that does not achieve completion in its overall conception until the last opening on 12 September 2013.
The exhibition sets out to challenge the separability of artist and work, and also to show performance in its ephemeral dual effect as “contrived” on the one hand and “real” on the other. In that performance influences the ways in which the experienced subject is seen and perceived, as well as what is identified as true or false, the productive dual character of the performative can reverse experiences of realness, as a production of reality.
Erstwhile concerns that a media-induced documentation of the performative (archive, video, photography) would undermine its authenticity cannot be confirmed.
Whether and to what extent can reenactments of historical performances—such as Guy de Cointet’s “Tell me” (1979)—prove themselves independent of their historical origins, stagings, and layers? Do they also permit analogies to current aesthetics and artistic explorations of political dimensions? Additional queries of this kind are just as essential in this series, representing a fascinating partial aspect related to the viewing of and deliberation on performative strategies by example of documentation, reception, and history within the visual arts: To which situation-based specifics engendered by the performance artist in his or her performance does he or she expose him- or herself and the audience? Does the execution of a concept remain tied to the author personally? Does the binarity that is ever presumed in performative contexts—active (performer) versus passive (audience)—inform the performance or rather actually act towards the surmounting thereof?
“Even when the dramaturge or the performer does not know what he wants the spectator to do, he knows at least that the spectator has to do something: switch from passivity to activity.”
Jacques Rancière, The Emancipated Spectator, Artforum (March 2007), p. 277.
In this exhibition series, pieces by radical pioneers of the (feminist) performance art of the 1960s and 1970s , such as Barbara T. Smith, Gina Pane, or Cosey Fanni Tutti, offer intact content, appeal, and meaning in the artworks despite inflationary definitions of the performative. The synergetic fringes of the performative in and with different fields like pop (Michael Clark + The Fall, Pauline Boudry / Renate Lorenz) or dance and choreography (Adam Linder) operate based on alternate temporal logics, evoking deviations of meaning and shifts. The essentials of the current variety of performative strategies and practices are kept experienceable through separate curatorial points of emphasis in complementary and transcending combination with the performance premieres by Michele di Menna, Liz Glynn, Jakob Lena Knebl, and Thomas Kratz staged in the Künstlerhaus, Halle für Kunst & Medien (KM–).
With an aim to introduce in-house formats to works by important historical forerunners through activated juxtaposition, the exhibition “The only performances that make it all the way ...” brings international protagonists to Graz for an exploration of up-to-date questions of the performative. This elaborate experiment will evolve over the course of the exhibition and be accompanied and documented at the end by a catalogue publication.
www.km-k.at