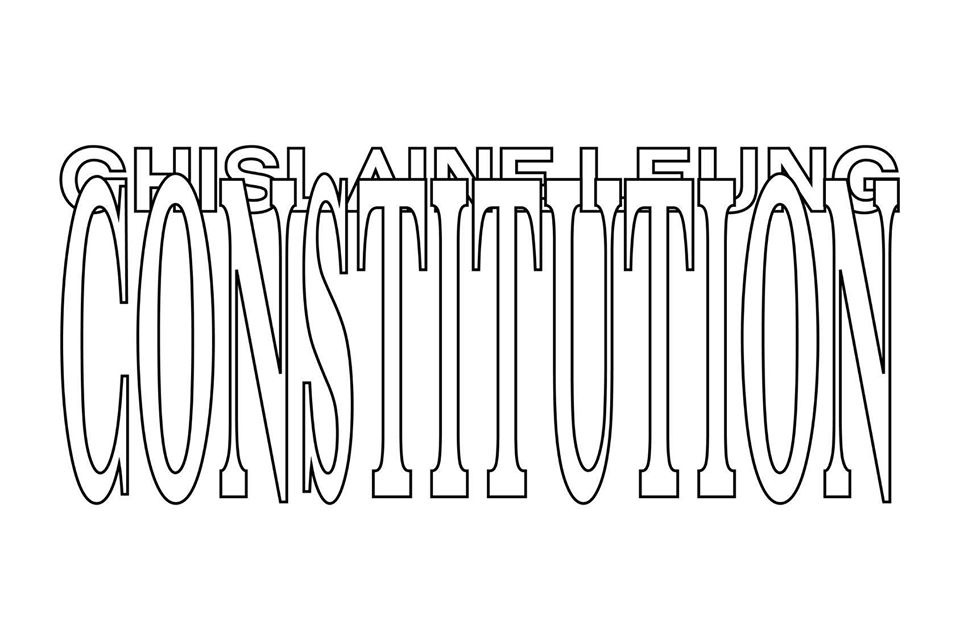 Through a small door sat recessed within a heavy-set wall, white gloss painted walls hang and fold down into a space punctuated by several black gloss coated doors. Tonal sound fills the space in pockets and holes that shift and move. Directly opposite prefabricated white metal panels filled with polyurethane are secured with bolts via white powder-coated metal brackets into the concrete floor. Two of these panels contain small fixed double-glazed windows with vents and double plug power supplies that each run, with white coated electrical cable, to a power source routing back the gloss painted wall. On the back of one panel, mounted low and close, is a large monitor screen running a video file from a small concealed media player, the cables of which are held together with a combination of cable ties and an unlocked heart-shaped padlock. To power this equipment, a long white lead folds around to reach the power source of the further panel. The sockets of the other panel remain unused and covered. Adjacent, three more prefabricated white metal panels, each panel containing one single plug power supply that runs, with white coated electrical cable, to sockets to a power source on the gloss painted wall. Two of these panels have small black plastic moulded lanterns attached to them, the white coated cables for which run to the plug points of another. A further solitary prefabricated white panel. This panel has no power supply running to it. Fixed to it is a small white powder-coated and wall-mounted heater powered by a single small, dark grey and lime green box with digital display also powering a small ceramic pink, white and green house-shaped object containing a light bulb. Behind this series of panels are two large black speakers, a bit too close together, from which emit the aforementioned low sounds. Also featured, a row of forty ceramic objects with black text printed on them wrapped in pairs in an abundance of red-heart and clear cellophane with a combination of oversized pull bows and light pink and red curled ribbon that sit, entrail-like, at the base of each object. Hung low on the white gloss walls are 272 close-cropped images taken over the years 2017, 2018, 2019 inclusive.

CONSTITUTION was commissioned and produced by Chisenhale Gallery, London, (25 January – 24 March, 2019) with production support by EMPAC, The Curtis R. Priem Experimental Media and Performing Arts Center at Rensselaer Polytechnic Institute through their artist in residence programme. Additional and context-contingent elements have been produced for Künstlerhaus Stuttgart.
www.kuenstlerhaus.de