In the Middle of Affairs 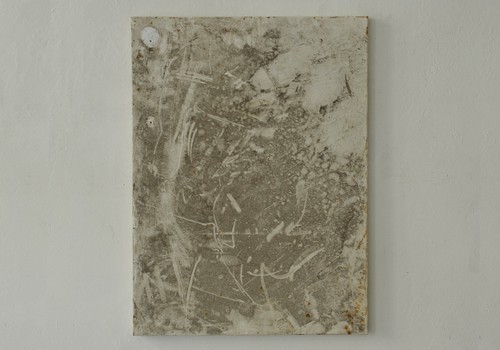 Hans-Christian Lotz, Untitled, 2009
IN THE MIDDLE OF AFFAIRS

“In the Middle of Affairs” shows works and projects that are concerned with channels of distribution and alternative fields of action connected to artistic practice. The works consciously adapt languages of design and advertisement, operate within commercial media and utilize and/or reflect upon its methods. The presentation includes works from the past thirty years as well as new works. In addition, a selection of press texts, exhibition cards, advertisements and other documents are included, which reflect the social networks surrounding a work or presentation, and which often function as catalysor for contextualization of works or topics. The exhibition focuses on critical attitudes towards the production of subjectivity and examines its media and methods, like newspapers and other printed matter, institutional spaces, roles and identities, as important aspects of meaning and value production.
“In the Middle of Affairs” functions not only as a title, it is simultaneously a description of the work methods in which a personal involvement indicates a viewpoint and an attempt at a close-up examination. It connects various approaches in a consciously fragmentary narrative, which unifies changing perspectives and various historical levels. The starting point of the project was a show that Egija Inzule and Tobias Kaspar realized in 2009 in Basel connected to the presentation of the first issue of the magazine PROVENCE. This exhibition consisted of two vitrines, in which the Journal Series by John Knight, as well as selected advertisements by the French collector Ghislain Mollet-Viéville from the 1970s and 1980s were on view, and which could be perceived as a spatialized sleeve note of the presented magazines.
The exhibition at Künstlerhaus Stuttgart presents further historical works of Louise Lawler, Ulises Carrión, the agency readymades belong to everyone founded by Phillipe Thomas, and the group IFP (Information Fiction Publicité). From Silvia Kolbowski, a newly-made retrospective of a work from 1990 is on display. Nairy Baghramian, Nicolas Ceccaldi, Nina Könnemann, Hans-Christian Lotz, Bonny Poon and the group Udio present works, some newly developed for the exhibition in Stuttgart. In a reader compiled by Maja Wismer, themes addressed in the works such as mechanisms of subjectivity, the art market and the culture industry are expanded within a selection of texts and documentation materials.
Another central aspect of the project is its interest in other forms of economies. The organization of independent exhibition spaces, the publication of books and magazines, the founding of publishing houses or work within the fields of fashion, music or graphic design are instruments that are not only utilized to create possible alternatives to the art market, but also to find ‚loopholes’ within it. These might at least momentarily offer a potential free space outside of the limited or normative constructs associated with established fields of art. Above all, these strategies might also be read as approaches to reflect on and openly negotiate one’s own subjectivity within these fields. The – temporary or provisional – adoption of various activities can be understood as a way to question the role of the author and the artwork within its particular cultural and sociopolitical situation.
With kind support by the Swiss Arts Council Pro Helvetia.
www.kuenstlerhaus.de