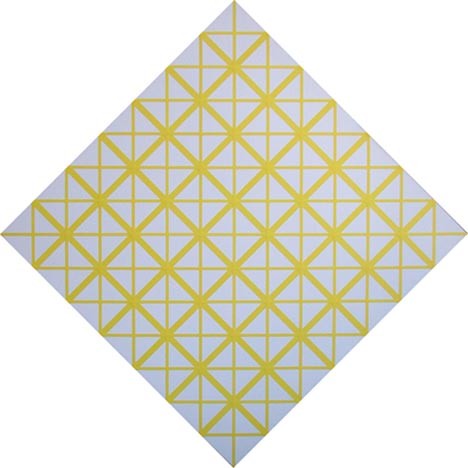 On Escape#3 presents 2 paintings and 1 drawing with grid structures, furthermore 2 publications* and a poster. The paintings allude to Composition with Grid 3 and Grid 4 by Piet Mondrian from 1918 and 1919 as well as to their reinterpretation in the 1960s by Ian Burn and Blinky Palermo. The German Palermo rather dealt with the effects of perception within the work of Mondrian. For the Australian Burn the aspect of including the spectator was central.
At that time painting was under the pressure of the critique of the minimalists. The main issue was the question of the actuality of abstraction and the way out of its crisis, which became one of the challenges fort he abstract painter. The abstraction of Mondrian appeared academic and lost some of its radical aura. Nevertheless the deliberate artist Ian Burn and the fearnought Blinky Palermo persistently experimented with the grid structures of Mondrian. Their attention fell on the diagonal in the grid structure, which they tried to expose, each in his own idea of abstract painting. The debate on this issue of grid painting undoubtedly didn’t lose its significance. In the 1980ies one of the powerful theorists, Rosaline Krauss, formulated a harsh criticism on the subject of grid painting, which she accused of being the quintessential form of modernism and being hostile towards the discourse.
Far from being a late successor of the project by Burns, Heimo Zobernig draws his attention to perpetually unfinished state of the project of modernism as manifested in the abstract grid painting. He uses this simple item in an ironic and playful manner. While presenting it as an exemplary image of modernism and its functionality, he also conserves the beauty of structure and material. In his analytical disclosure one can find the specific poetry of Zobernig and his way out for the aesthetic reflection of painting and its relevance for the present.