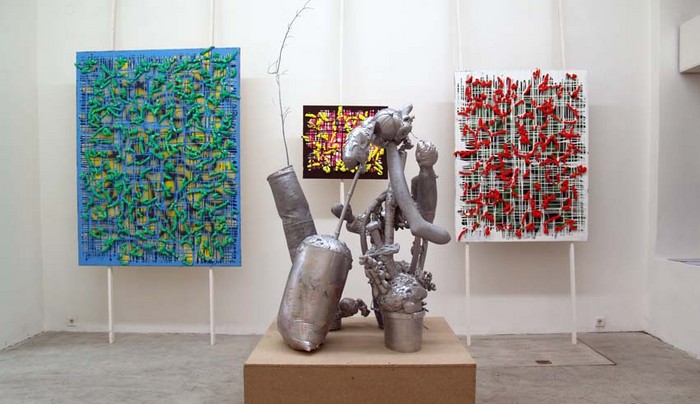 Sometime in 1971, in the Amsterdamse Bos, Bas Jan Ader climbed up a tree, worked his way out onto a branch, and dangled above a stream. Eventually his grip tired, or he simply decided to let go. The fall was inelegant, and in the film, he appears to have hurt himself. For those predisposed to such things, Ader’s action is romantic, if not heroic. A few years later, June 1, 1975 to be exact, President Gerald Ford fell down the last few steps leading from Air Force One just as he was about to greet Chancellor Bruno Kreisky in Salzburg. Ford’s slip was humiliating. It did not help that he stumbled a couple more times that night. His missteps became the source of parody for the comedian Chevy Chase, and most thought of Ford as a bumbling klutz despite the fact that he was a star football player at the University of Michigan.
Roland Seidel’s latest body of work also falls, or appears to be in the act of falling. They tumble in a manner that is in many ways in between Ader and Ford’s descent to the ground. Undoubtedly, in some of the sculptures, the paint drips in homage to gravity. The paintings, however, are a different matter. They are homely, strangely confrontational, yet oddly welcoming. The neon colors, self-contained gridded patterns, and the Styrofoam shit laid on the surface make for self-consciously pathetic compositions. They are pitiable in the way Ford needed assistance to his feet—the way his body appears slump as the man to his left tries to help him up. Then again, these paintings brim with energy. They are literally pushing themselves towards the viewer, teetering deliberately on these makeshift constructions just as Ader hung from the tree. Their precarious situation is akin to how Laurie Anderson describes the act of walking: “You're walking. And you don't always realize it, but you're always falling. With each step you fall forward slightly. And then catch yourself from falling. Over and over, you're falling. And then catching yourself from falling.”
The show internalizes the humdrum danger Anderson associates with walking. Seidel has made a statement that can only be said once. These paintings, in particular, do not represent what he normally does, nor do they show a progression of formal ideas developed over years. They are a onetime deal, never to be seen again. It’s a brilliant conceit and an extraordinary risk that could be laudable like Ader or tragic as with Ford. In the end it doesn’t really matter. What counts is that Seidel had the guts to fall, which is a compelling statement in itself—one that opens up numerous possibilities for the future.
Alexander Dumbadze, Professor of modern art history at George Washington University , Washington DC
www.kunstbuero.at