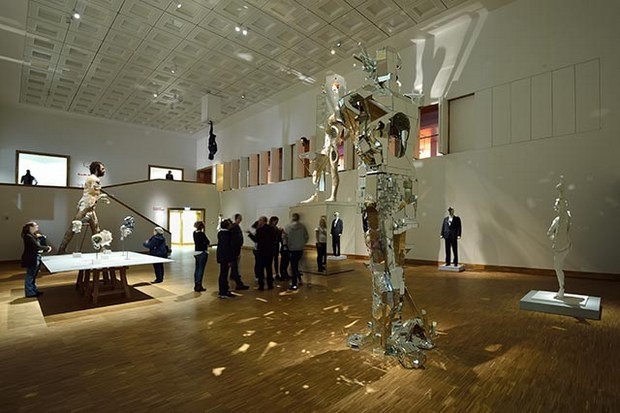 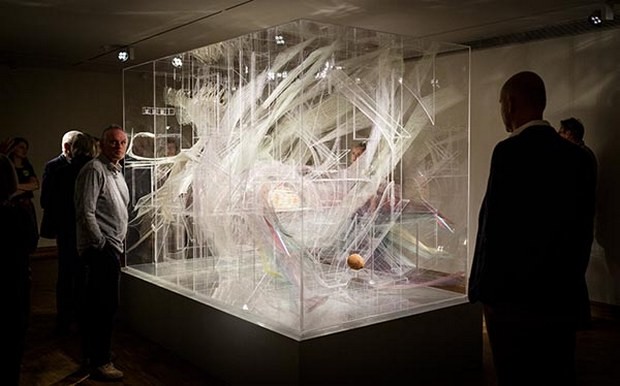 This autumn, Kunsthal KAdE presents two unusual and outstanding solo shows of work by Canadian sculptor David Altmejd (b. 1974) and German painter Friedrich Kunath (b. 1974). Under the umbrella title ‘Self-Fiction’, Altmejd will exhibit his sculptures on the lower floor of the exhibition space, while Kunath presents an all-round installation of paintings, neon artworks, objects and videos upstairs. Work by Friedrich Kunath was previously shown at Kunsthal KAdE as part of the ‘Märklin World’ exhibition in 2012. David Altmejd first came to international prominence with his large-scale presentation in the Canadian pavilion at the 2007 Venice Biennale, while Friedrich Kunath did so at the 2008 Carnegie International in Pittsburgh (the American counterpart of Documenta). In recent years, both artists have had solo shows in top museums and galleries worldwide.

'Self- Fiction'
The title ‘Self-Fiction’ refers to the nature of their work. Altmejd and Kunath both invest their work with their own personalities but do so in a sufficiently abstract way that the result is a ‘fiction’ that every viewer can understand and interpret. The fictive self-portraits they present are both personal narratives and universal ‘truths’.

David Altmejd
David Altmejd’s work falls into three categories: figure sculptures (from life-size to giant) executed in a wide variety of materials and styles; ‘heads’ skewered on stakes; and architectural structures, ranging from transparent Perspex vitrines to minimalist plinths on which selected objects are arranged to form ‘landscapes’.

Altmejd’s visual vocabulary is eclectic. His half-human, half-animal imagery is drawn from the world of myth and legend, but also from his own ‘lucid dreams’ or nightmares; his approach is literary and narrative, but also pseudo-scientific; it is at once down-to-earth and esoteric, involving both analysis and falsification; it is intimate, but at the same time elusive. The resulting work is strongly metaphorical. Altmejd’s figures are like beings from another universe: half-man, half-beast; part god, part creature of fable. Many of them are hollowed out to accommodate cave-like openings, as if their bodies were landscapes (a reference to myths and legends in which elements in the landscape are described anthropomorphically).

Altmejd’s sculptures are mirrors, both literally and figuratively. Literally, because they incorporate a myriad shards of mirror glass that constantly bring the viewer face to face with himself. The reflection is often fragmented, both because the mirrored surface is a mosaic and because the artist deliberately hammers on it, creating cracks and holes. Figuratively, because Altmejd’s figures are alter egos of the viewer, so charged with associations and symbolism that they necessarily invite interpretation (although that interpretation will be different for each one of us, depending on our individual frame of reference).

Double Solo David Altmejd & Friedrich Kunath
The ambiguity inherent in the way David Altmejd approaches his subjects (which are really always about life, death, metamorphosis and ‘energy’) is shared by his German co-exhibitor, Friedrich Kunath. Indeed, ambiguity is at the very heart of Kunath’s work. Jokiness is coupled with desire, the language of kitsch merges with the art historical canon, the make-believe world of Los Angeles and Hollywood meets German philosophy, and the easy-listening popular music subculture joins hands with the ‘posh’ and frivolous world of perfumery. The layered nature of Kunath’s universe finds expression in juxtaposed or overlapping motifs and fragments of text superimposed on landscape backgrounds: panoramic vistas that often feature a setting sun or rainbow (standard clichés of romantic yearning) on the horizon.

Friedrich Kunath
Kunath’s world is a potpourri: absurd, psychedelic, jokey, yet straight-faced. Virtually every work is infused with a tangible awareness that the world is a theatre of unfulfilled dreams, in which the parallel universe of popular culture provides the only escape from the harsh realities of existence. His whole artistic universe revolves around Romanticism, from Caspar David Friedrich – the supreme painter of the sublime – to Frederic E. Church of the mid-19th century Hudson River School (which glorified the American landscape).

Kunath’s paintings reveal an urgent desire to encompass the whole of life, accompanied by the realisation of the impossibility of doing so. They present life as a utopia invariably doomed to failure. But the tone of the tragic-comic portrayal is never pessimistic. Irony and melancholy coalesce in an upbeat vocabulary, with a new and glorious sunset always on the horizon.