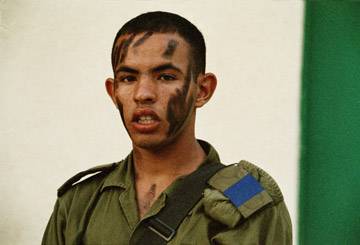 The photographs of Ahlam Shibli (*1970) broach the issue of the specific relations of power between Palestinians and Israelis. In her series Trackers, which consists of 85 photographs, the artist documents the daily lives of young Palestinians who have decided to join the Israeli army. The series focuses on the mundane and non-heroic aspects of their lives. We see them taking a rest, waiting, meeting families, rather than engaging in any kind of action. Shibli approaches her subjects personally and she renders them individually on a human level, rather than trying to inscribe a direct political comment into her work. This makes her artistic work unique, and distinctively different to that of press photographers, whose aim is usually to produce the most attractive and sensational pictures for a mass audience while remaining detached from their subject matter. In contrast to this journalistic approach, Shibli brings the Palestinian youth close to the viewers, she lends them intimacy and gives them true dignity.
The complete series Trackers (2005) will be shown for the first time in the Oberlichtsaal at the Kunsthalle Basel.