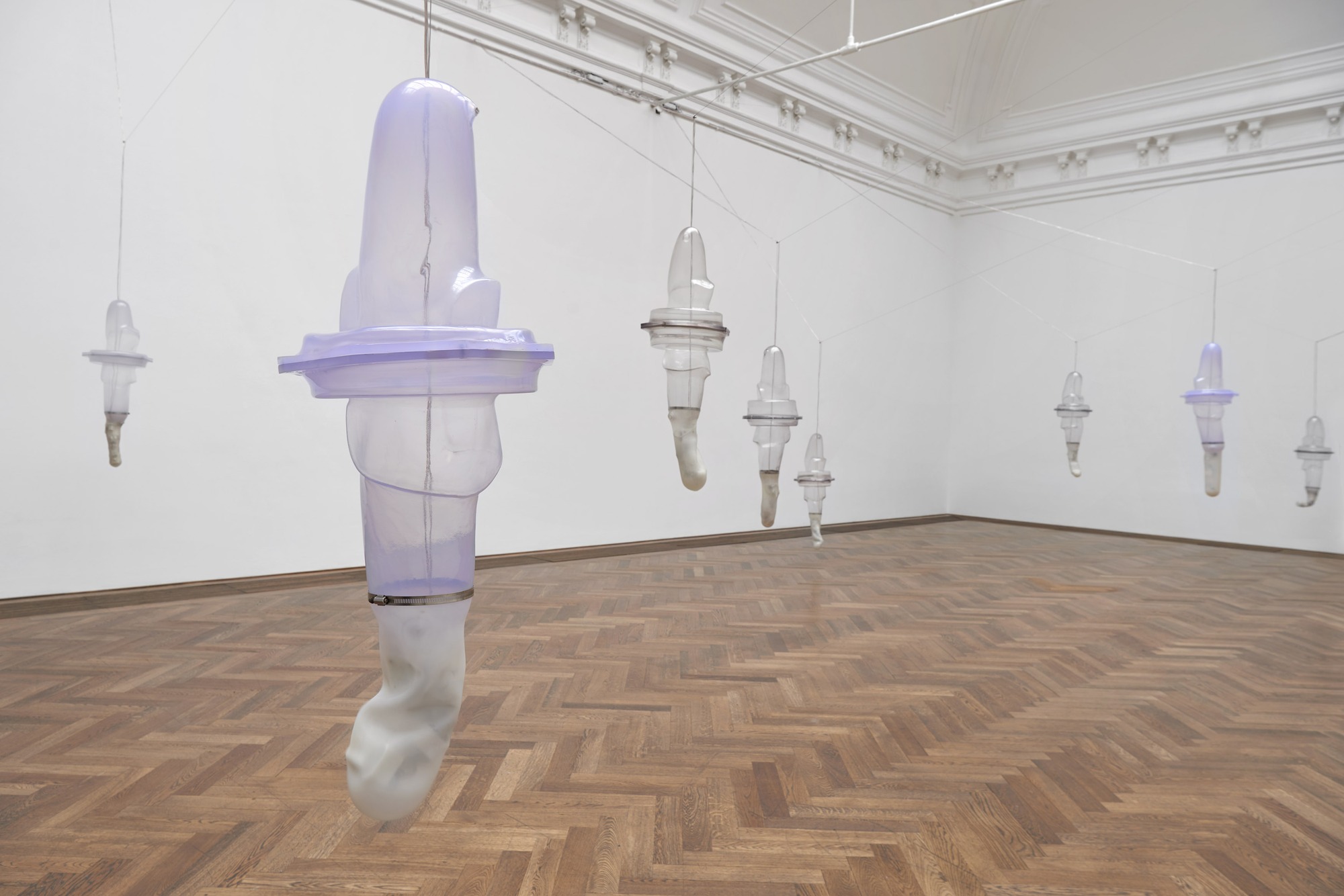 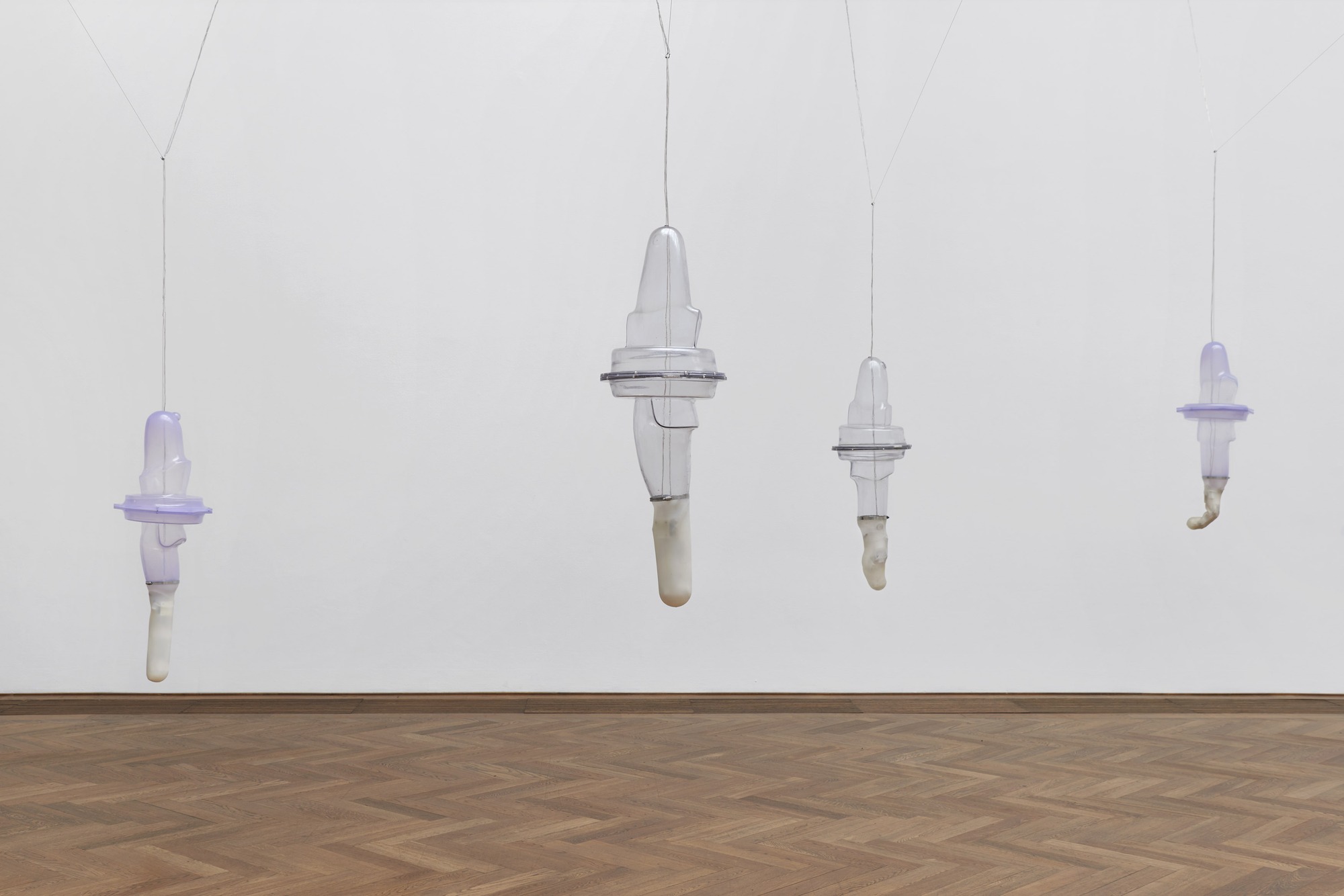 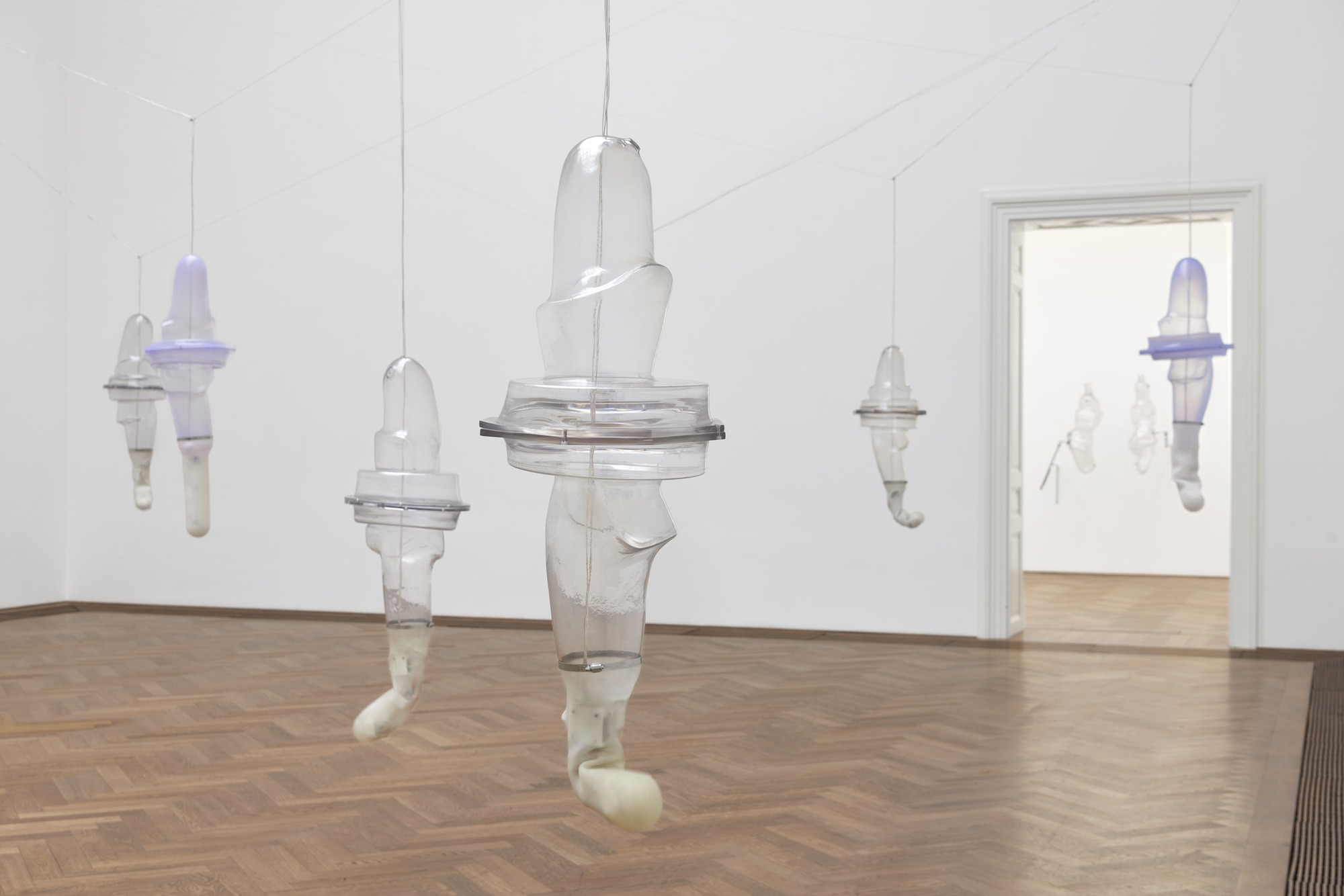 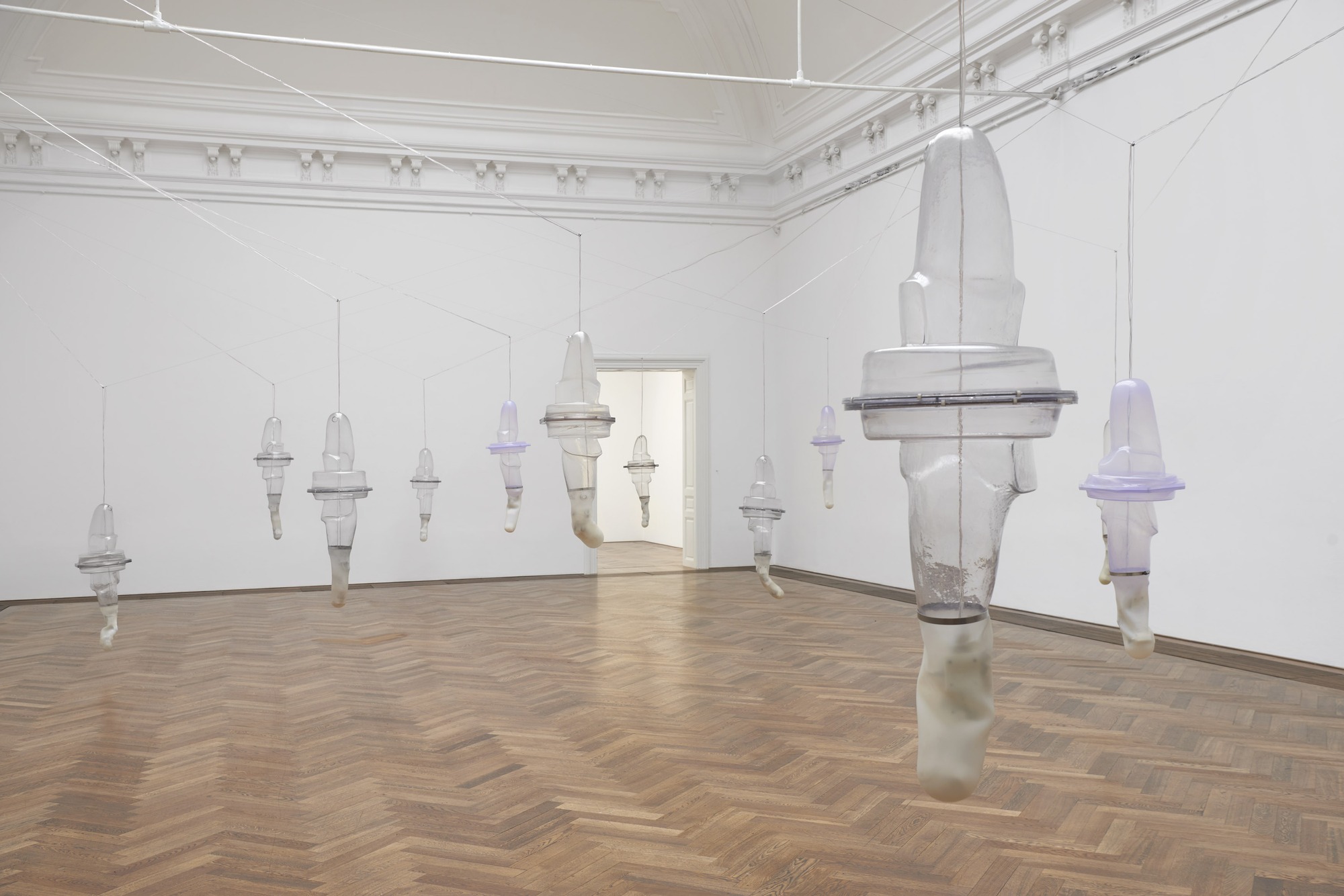 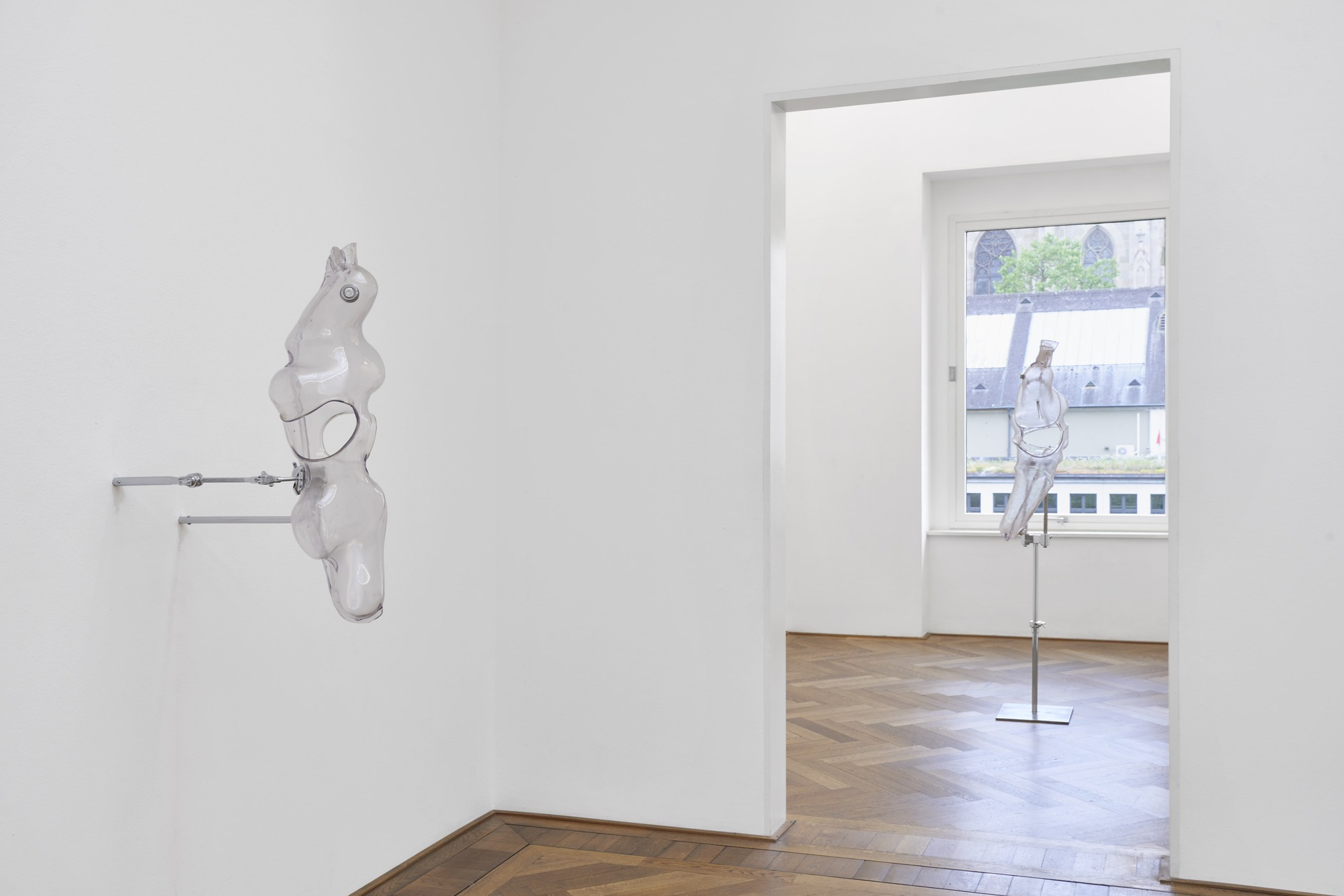 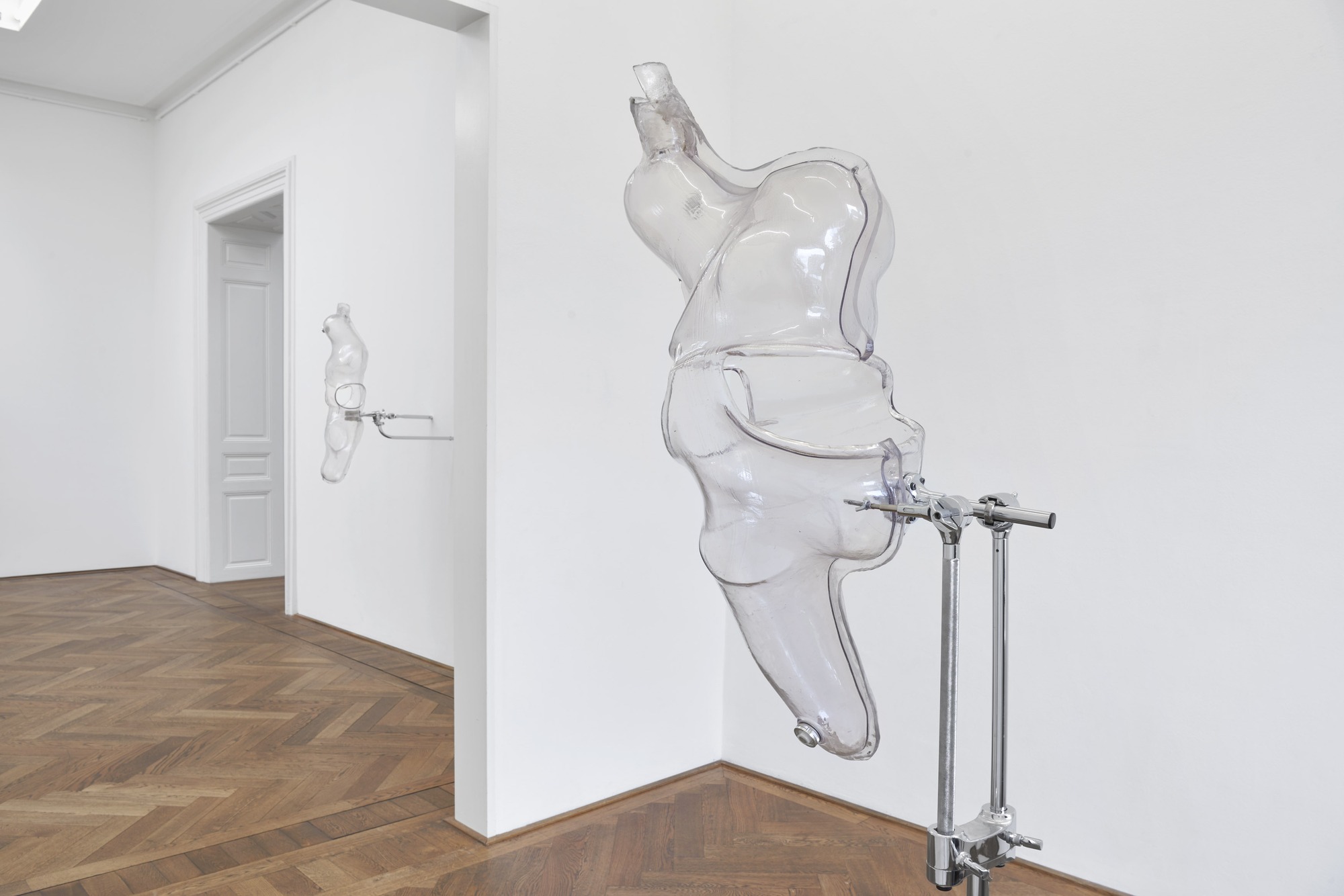 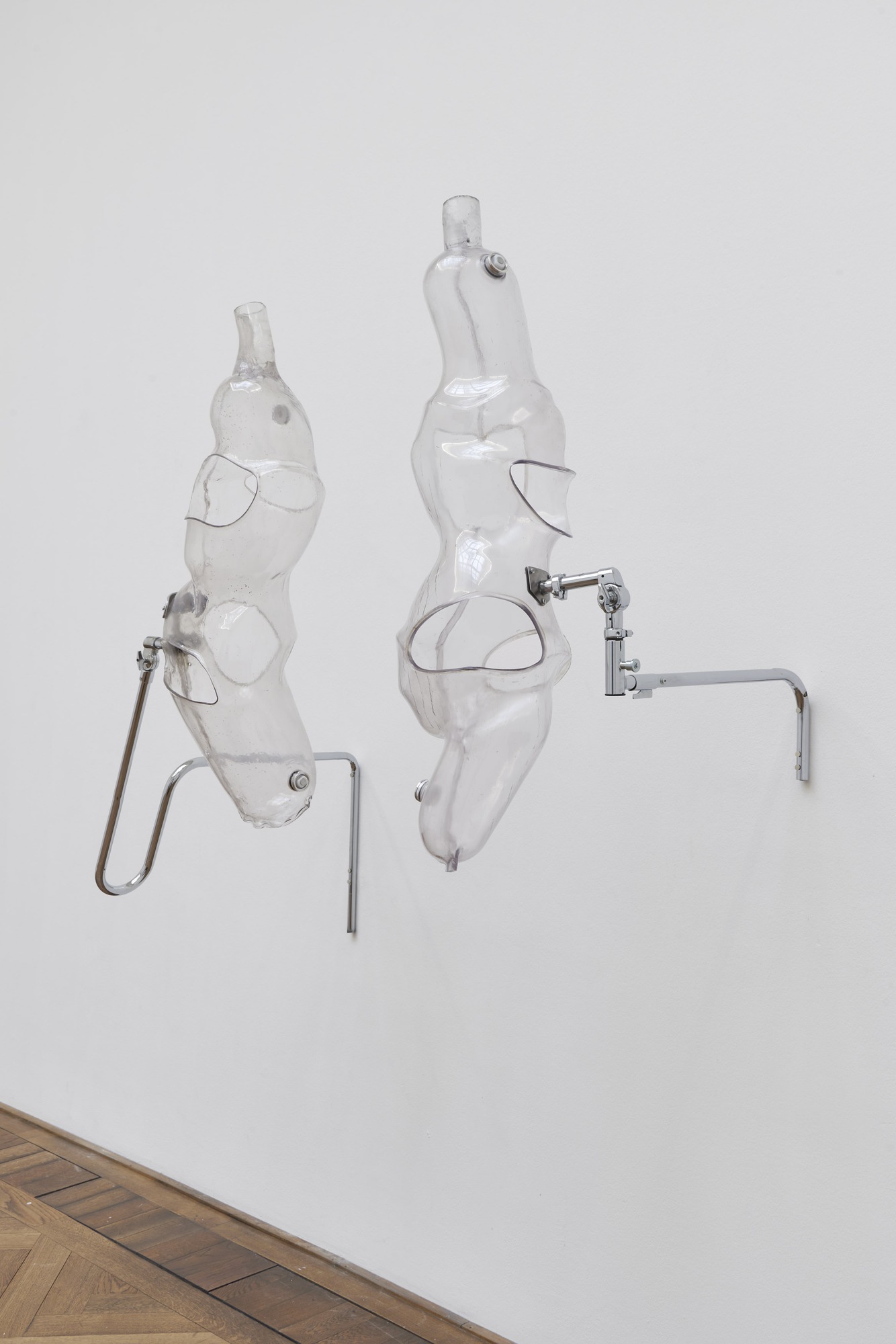 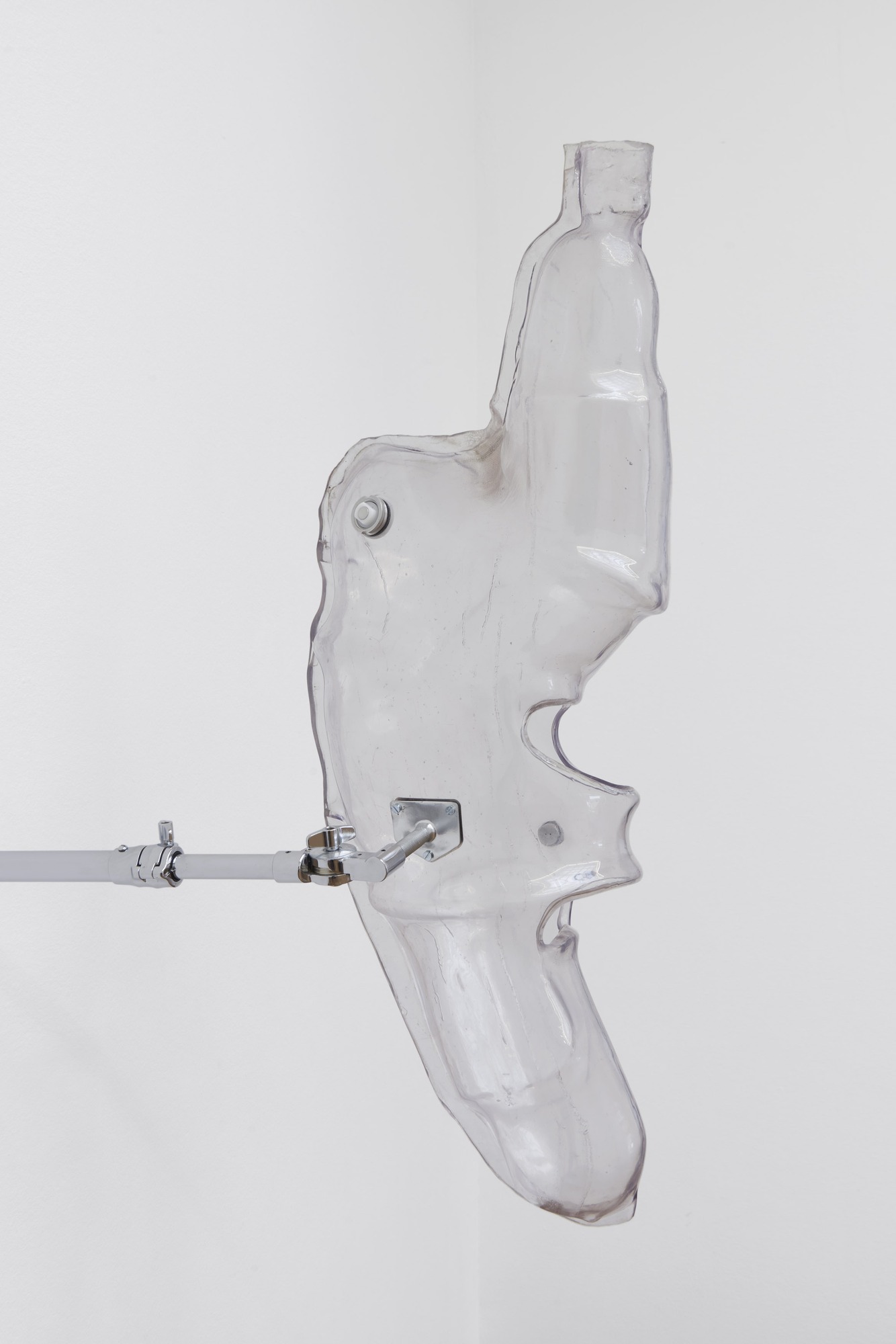 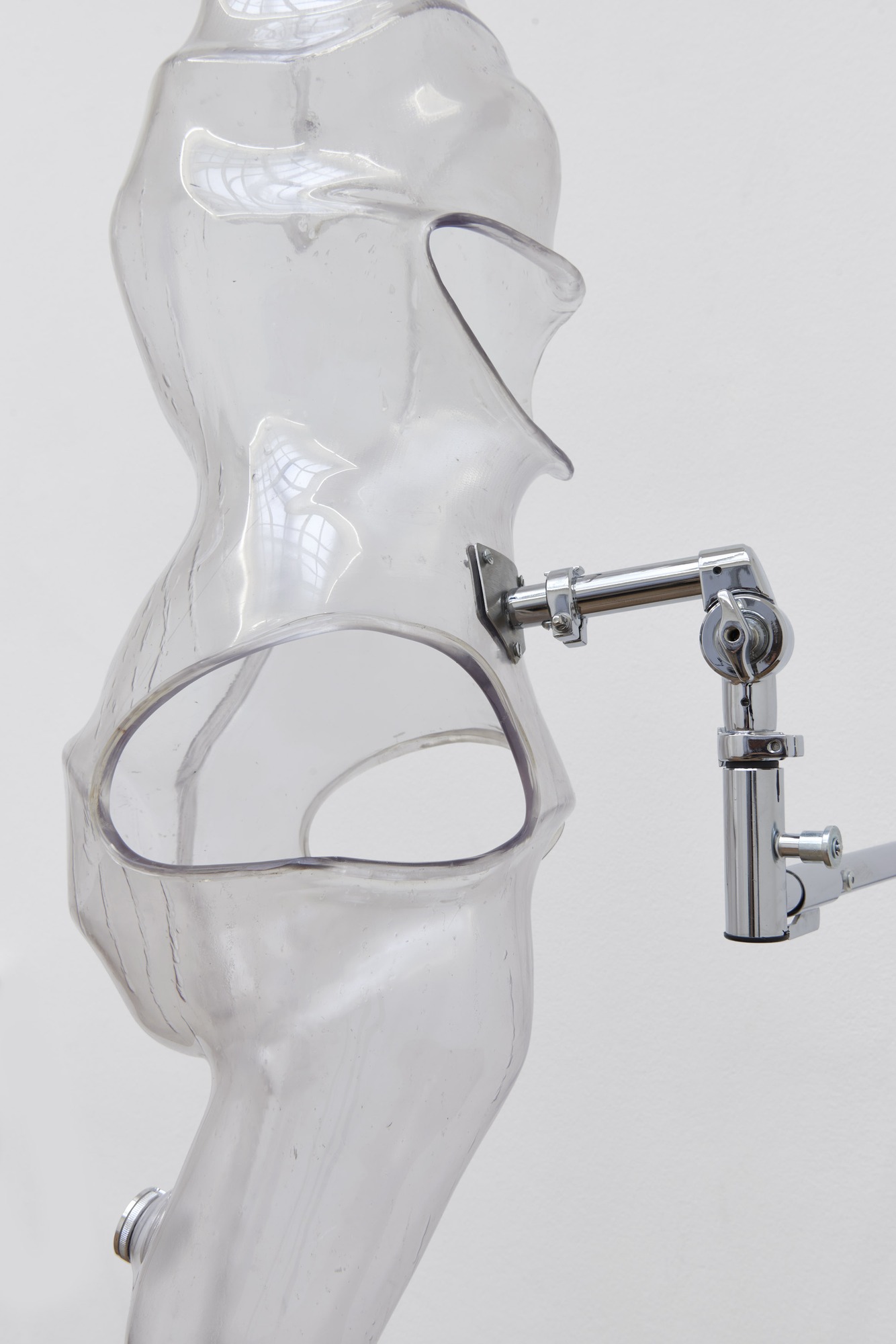 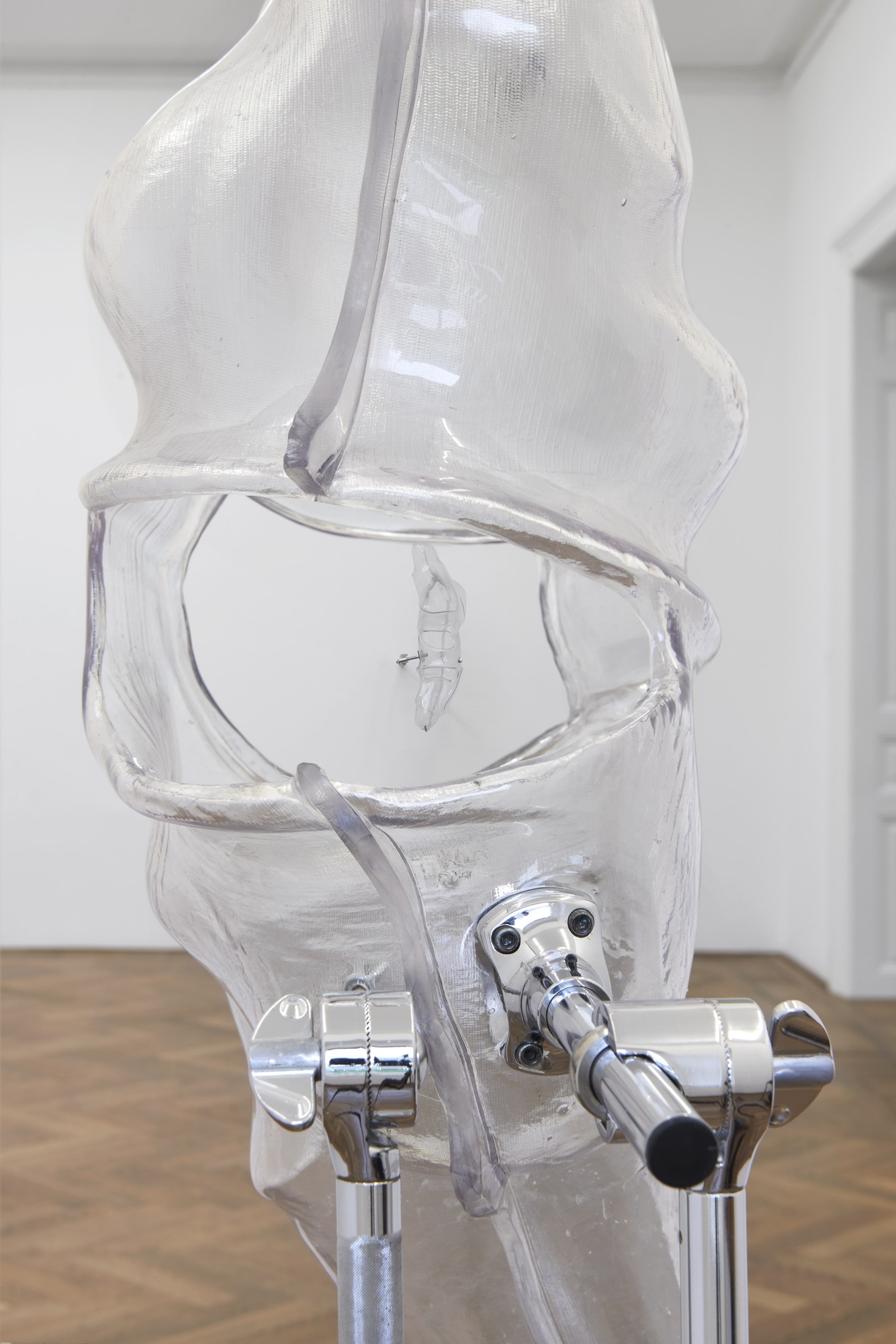 Exhibition view, Berenice Olmedo, "Hic et Nunc," Kunsthalle Basel, 2022. Photo: Philipp Hänger / Kunsthalle Basel
Enter. They are waiting for you. Looking neither altogether human nor quite animal, perhaps insectoid, yet not quite organic—like and unlike any of these categories. A multitude of motorized sculptures, suspended from wires, welcomes you into the first space of Berenice Olmedo’s exhibition. Translucent and strange, corporeal and technological, near colorless and seemingly weightless, they quiver, curl, and torque. Occasionally they pause, as if temporarily exhausted.

Newly made for her largest exhibition to date and her first institutional show in Switzerland, Olmedo’s sculptures might initially evoke earth- worms exploring plastic cocoons, lugubriously twitchy condom-encased penises, or even extra- terrestrial massage devices. Their origin does not readily reveal itself.

In fact, the artist used a rehabilitation clinic’s ar- chive of cast stumps from different human amputees, taking molds from these forms to create her own, second-generation, replicas. Each sculpture, made by the artist using the same materials commonly deployed in the pro- duction of prosthetics, is a conjunction of two different subjects’ body casts. At first glance, they offer an appearance of reproduced seri- ality, yet all are unique and show the variations of each individual amputation. The amputees’ names, featured as part of the works’ titles, hint at this assembly of singularities.

The objects’ movements arise from small robotic mechanisms in each sculpture’s bottommost tip, draped in a silicone liner typically used to create a protective barrier between an ampu- tated limb and its prosthesis. Some of the sheaths appear dirty, or used, or have tears in their soft tissue. Such details insist on these “bodies” as marked and imperfect, but functional and dis- tinct, and add to their oddly mesmerizing allure. To choose Hic et Nunc (Latin for “here and now”) as the title for these works and the exhibition as a whole insists that for all the timelessness of Olmedo’s inquiry (the body is, after all, sculp- ture’s most enduring subject), there is an urgent need to rethink the definition of what is human in the present moment.

The question of what counts as “normal” (or its opposite, and who decides) has been the motor of the Mexican artist’s practice for many years now. And those marginalized by society—whether stray dogs or physically impaired humans—have been her polestars. Olmedo’s previous mech- anized sculptures were perpetually failing to achieve the erectness and verticality that repre- sents health, ability, and control. Her sculptures in this exhibition’s first room, on the other hand, enact a choreography far more ambigu- ous and even more unsettling. They lend body, quite literally, to the artist’s prolific theoretical writing, in which she argues for a reconsider- ation of what defines the human in order to finally and fully include those who do not match the white, Western, masculine, able-bodied norm. The translucency of Olmedo’s works in this first gallery lays bare the mechanics driving them, but also gives them an apparitional quali- ty—a sense of simultaneous presence and ab- sence. It embodies the artist’s avid interest in the writings of philosophers Gilles Deleuze and Félix Guattari, specifically their notion of “becoming-imperceptible” as a counterstrategy to modern societies’ management of human life.

In the second and third rooms, the play with im- perceptibility continues. Hollow vessels bulge in ways that varyingly insinuate a body’s truncat- ed form. There are casts of amputated legs again, but also of hips and torsos, thermoformed and artfully combined into fusions of fragmented parts—frozen siblings of their mechanized coun- terparts in the first room. Exquisite corpses of a sort, they are immobilized and braced with a hint of violence. Puckers, valves, and gaping openings punctuate these carapaces, which are attached to the metal railings of hospital beds or, in one case, a hip brace (abduction orthosis). The smooth chrome rods and brackets evoke bodily injury and a certain cold, clinical asceti- cism. Titled alêtheia, ancient Greek for “truth” or “disclosure,” these chillingly beautiful works suggest postapocalyptic ice-sculpture versions of classic Greek figures, now broken—at once timeless and weirdly contemporary.

With these two groups of works, the artist dis- possesses the human of its claim of wholeness and foregrounds the political dimensions of dis- ability, illness, and care. The merciless standard- ization imposed on our bodies is arguably the through-line that connects Olmedo’s works over the last few years, and it is the visible, snaking wirethatelectrifiesherthoughtsandpractice. Again and again, she asks us to recognize hu- manness as produced and the human as inher- ently dis-abled—unable to exist without the support of extrinsic aids of whatever kind. Her recuperation of forms and materials from the arsenal of medicine aims to transform the pros- thesis from a mechanical solution for a supposed bodily defect into an existential technology that unveils the nature of what it is to be human.

Olmedo articulates what some call a crip sensi- bility, disavowing physical purity through an un- relenting inquiry into health and care, “normal” and other. Her art is rife with cues to understanding the self under capitalism, with its in- exorable demand for labor productivity geared toward profit maximization—the extension of colonial rule and an imperialist logic. And under these inhumane and relentless conditions, we are further judged, disciplined, and punished according to laws made by and for those con- forming to so-called universal norms. Yet in a place like Mexico, where the artist hails from and continues to live, or other places where the welfare state has crumbled or indeed never properly existed, vast swaths of the population are without adequate access to the kind of medical attention, healthy diet, and care needed to maintain such standards. Bodies always end up paying the price, and some—because of their skin color or class or gender—more than others.

When she intertwines flesh and technology, or renders the body inescapably bound by its prosthetics and ortheses, Olmedo does so against the grain of our smooth, frictionless, increasingly digital age, with its cloud comput- ing, immaterial information flows, and slick HD interfaces. In the face of this, the peculiar materiality of her struggling, prosthetically supported forms feels stubborn, tenacious. The artist rejects the championing of mind- less, bodiless efficiency, speed, and seamless perfection. Her point is not only corporeal, but political and existential.

“Historically,” Olmedo writes, “man—white, heteronormative, adult, able-bodied—has been privileged as the universal norm against which everything else is measured, making women, children, queers, disabled, animals, plants, and molecules the ‘other.’ But as beings made of tissue and fluids, we must tear the notion of the body away from an anthropocentric hierarchy that places ‘man’ at its pinnacle and regard the body as a site for an encounter with that cate- gory’s other. There is no stigma of disability in the world I propose, but only variations of existence, variations of movement, variations ofslownessandspeed.”

So, enter. Awaiting you here are indeterminate beings—their species ambiguous. Each caught in their own mode of existence, they move at various speeds and in diverse rhythms. Humbly, they invite you into their community. Through them, Olmedo calls for our compassion toward a timely and urgent project; it is her response to the here and now.

Berenice Olmedo was born in 1987 in Oaxaca, MX; she lives and works in Mexico City.
www.kunsthallebasel.ch