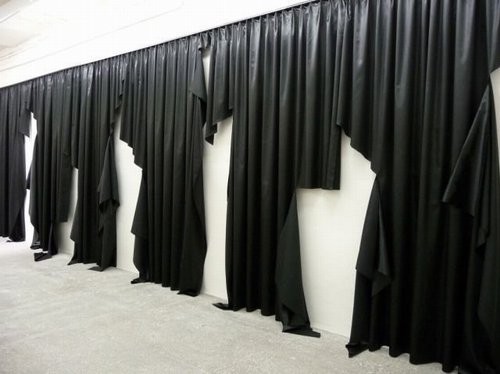 At regular intervals over the past years, various projects have been presented by international and Swiss artists at the back wall of the Kunsthalle Basel. Among others, the Romanian artist Dan Perjovschi showed drawings on the outside wall in 2007-08, while last year the Swiss artist Karin Hueber produced an abstract composition.

As of August 20, 2009, the Basel based artist Edit Oderbolz (b. 1966, Stein am Rhein), will present a new project on the back wall, developed specially for this site between the Kunsthalle building, the theatre and the Elisabethenkirche.
Edit Oderbolz’ installation alludes in its form to the kind of grids used on windows and doors as protective and security measures. She thus adopts a motif which, in the context of buildings, can be read as an exclusion of the public life. The shape of these grids, mostly made of cast iron, can vary greatly, depending on their function and location. In state buildings (such as jails) and in houses, they are often simple geometrical struts intended to prevent break-ins or break-outs. But in keeping with the cultural and local building styles, their ornamental patterns or formal playfulness can also serve to decorate the house facade. Architects generally use grids on house facades where the inside space is to be separated or shielded from the outside, albeit without visually concealing it completely.

Based on such protective grids, the artist has designed a sequence of six barred planes attached closely to the wall. The pattern of the rods, made of reinforced iron, adheres to a formal artistic vocabulary of its own which explores the graphic potential of window bars by means of formal repetitions, gaps and unexpected links. The resulting constructs refer to one another like signs within a rudimentary linguistic structure. Some of the rods diverge from the configuration by being distorted and thus result in a subtle movement that subverts any functional stability. The open structure is in a state of dissolution while at the same time creating an autonomous formation that surveys and locates the outside wall of the Kunsthalle anew. It is the allusion to windows that alters the localisation of the wall: the grids transform the rear wall into the “blind” facade of a private house and thus construct another possible architectural situation for this specific place. The grids also refer back to the art institution, which itself has window grids on the side lateral to the theatre steps.

Pieces of differently coloured cloth are attached to the rods, transforming the construct on the wall into a sculptural image with a shimmering abstract colour composition. These underscore the impression of an interior space which could be behind the bars and is to be protected from view. Although they originate in everyday life, the pieces of cloth recall the various strategies used by house owners so as to feel protected and at home in a building.

The artist focuses on an often unnoticed architectural element, which, when robbed of its original function, becomes a metaphor for a permeable inside and outside space. Consisting literally of “sculptural passages”, Oderbolz’ installation questions the way architecture functions and signifies, its linguistic description and its impact on us.

Edit Oderbolz’s work will remain on the back wall until the end of March 2010.