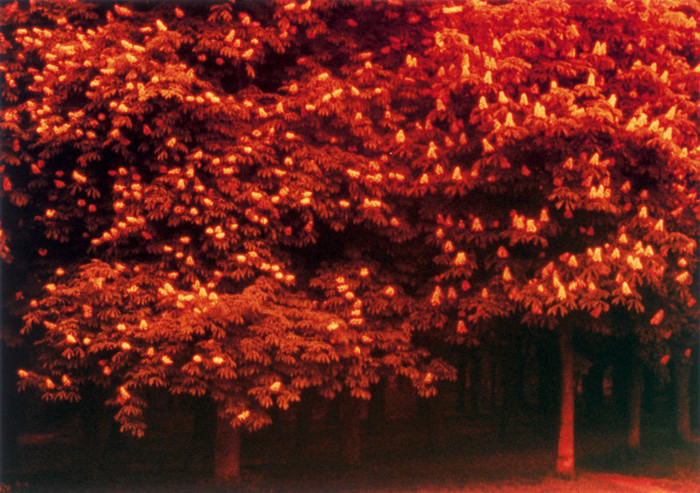 The Swiss artist Hannes Schüpbach (b. 1965 in Winterthur) is having his first large solo exhibition in an institutional context at Kunsthalle Basel. Schüpbach is a filmmaker, painter, performance artist, and curator of film programs. In Stills and Movies, he is presenting for the first time a combination of his painted and cinematic oeuvres. Both media are inseparably connected in his approach to his work: the films and the paintings are two idioms that Schüpbach adopts to articulate the major themes of his artistic work: the representation of time and movement and the complex processes of experiencing and remembering.
Hannes Schüpbach studied at the Hochschule für Gestaltung in Zurich and the Hochschule für Gestaltung und Kunst in Basel from 1988 to 1991, then in 1992 spent a semester studying cinema and performance studies (MA) at New York University. Among his professors in Basel were Werner von Mutzenbecher and André Lehmann, both leading figures in the experimental film movement in Basel in the 1970s and 1980s. Their works were an important influence on the artist’s cinematic practice. In 1999 Schüpbach founded the series Film direkt, which presents monthly curated film programs at the Filmpodium in Zurich and abroad and issues publications on the art films it presents. Hannes Schüpbach has become known above all for his 16 mm films, which he has shown individually and in retrospectives at the Kunstmuseum Winterthur (2003), the Centre Pompidou, Paris (2005), and at the Biennale de l’image en mouve-ment, Geneva (2007), among other places. In spring 2009 there will be presentations at the Museum Reina Sofía, Madrid, and at Tate Modern, London.

Since the beginning of his artistic career, Schüpbach has worked extensively in paint-ing: he has created large, connected series of paintings whose simple combinations of colors attract the viewers’ physical movement in the space. Works such as Exposition I (WECHSEL) (1992) and Exposition II (AKKUMULATION) (1993) focus on the idea of “cinematic formulas” as the precisely selected hues on the canvases from a continu-ous rhythm. In the series Exposition III (WENDUNGEN) (1995), bright and dark fields of color alternate on the individual canvases, which also have colorful frames of various widths. The carefully conceived transformations of the changing colors and geometric forms, some of which follow mathematical notations, acquire in the exhibition space an almost musical quality. In his paintings, the artist orbits his interest in the music of America composers John Cage and Morton Feldman, Classical Indian music is also an important reference in his work for its ability to establish a series of moments of equal importance.

His explorations of how to depict movement led Hannes Schüpbach increasingly in the late 1990s to the medium of film, where superimpositions and repetitions play an im-portant role in constructing the narrative. At the same time the artist has grappled with the painterly quality of visual motifs and their depiction in film: with shots of folds, drapery, and ornamental structures from nature. Films such as Winter Feuer (1999–2000), Spin (2001), and Toccata (2002) take objects from everyday life, frag-ments of landscapes or natural elements such as water and sunlight, and thereby fo-cus on their material and expressive potential. These images without sound reveal changing materials that are further transformed by montage: one of the most signifi-cant cinematic means here is the use of intervals of black, which sometimes last for only a fraction of a second, to both separate the images from one another and link them, as it were. The sequences of images thus follow the psychological and physical conditions of our visual perception: the shots repeat with small changes, so that the viewers can direct their attention each time to a previously unperceived detail. The variations in Schüpbach’s films are never linear but rather follow their own path, where they become more dense and interlocked to then dissolve again. In his more recent films, such as Falten (2005) and L’Atelier (2007), Schüpbach continues his pre-occupation with artistic processes and the artist’s own positions; in Verso (2008), he employs more autobiographical images.

In four rooms on the ground floor at Kunsthalle Basel Hannes Schüpbach will present some of his early paintings, the series Exposition II and III (1993 and 1995) as well as object-like works on the wall such as Im Spiegel der Zahlen (1991) and Acceleration (Crowd-Cloud) (1995). These series should be seen as closely connected to the pain-terly and temporal qualities of the medium of film: montage technique and the formu-lation of the loop. These paintings reduced to essential elements can be read as an abstracted form of the temporal and narrative structure of film and of music. In the exhibition, Schüpbach’s 16 mm films will be shown at various times as part of chang-ing film programs in a room that has been converted into a cinema auditorium. In ad-dition, the artist will present two performances on March 19, 2009: Feldman-Lesung (1998), a composed lecture, and Sequenz (1996), in which a series of white porcelain planes with painted symbols is passed from hand to hand through the audience.
Hannes Schüpbach’s exhibition at Kunsthalle Basel will be accompanied by the publi-cation Cinema Elements published by Scheidegger & Spiess, Zurich; with texts in German and English by Adam Szymczyk, Eleonore Frey, Philippe-Alain Michaud, Andréa Picard and Hannes Schüpbach. (CHF 59).
www.kunsthallebasel.ch