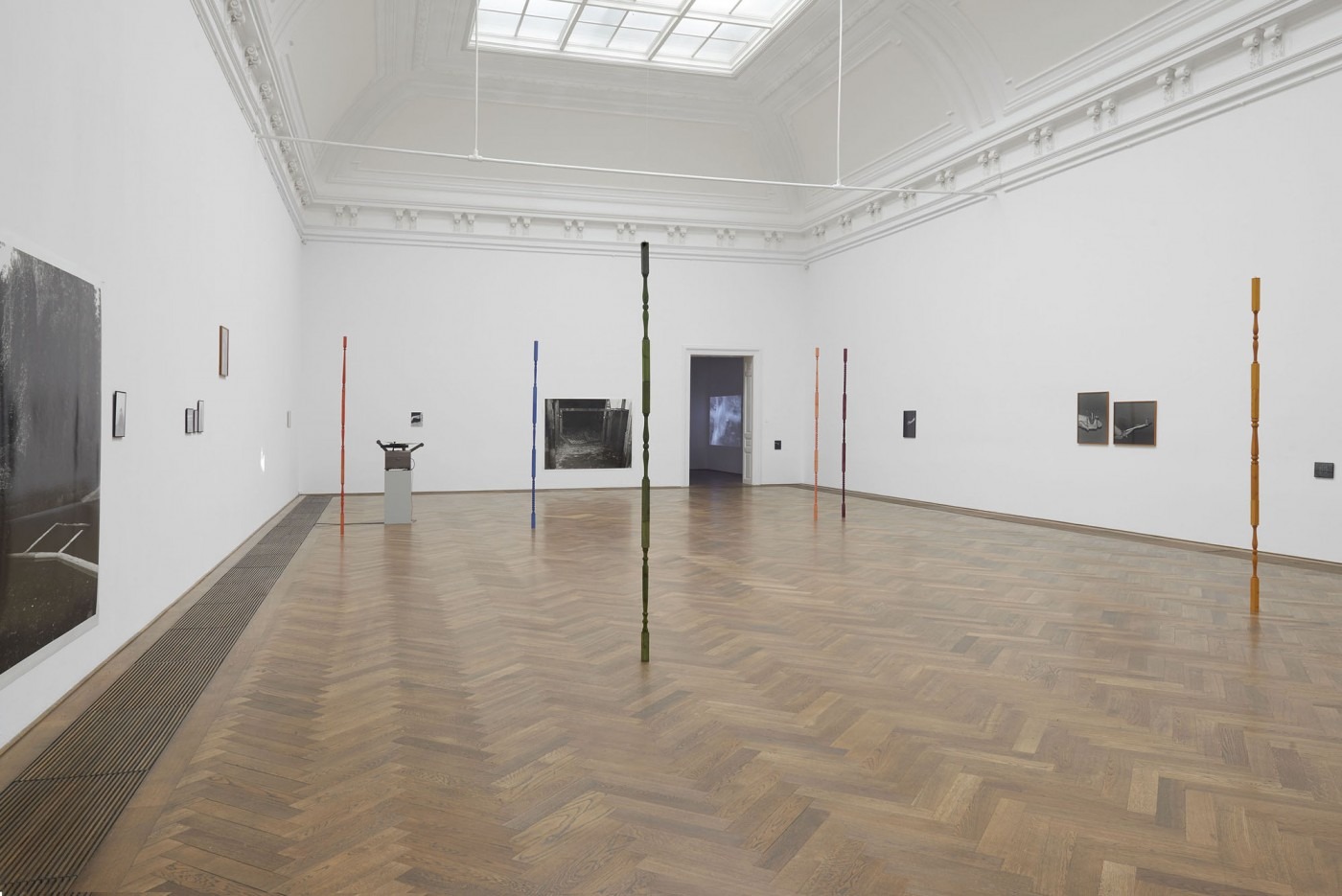 Perhaps the first thing you notice about Joanna Piotrowska’s imag- es is how they elicit a sense of unease. And this even though her black and white photographs, 16 mm films, and two-channel video projection are starkly elegant, classical, even. They picture such things as empty animal enclosures (no beast in sight), a single finger pointing somewhere on the body (a vital point, in fact), two men in their underwear (lying on the floor of their family home), or an arm outstretched to display or play with a metallic item whose purpose seems enigmatic (A toy? A weapon? A torture device?). Each of the artist’s still or moving images on its own conveys a sense of inscrutable peculiarity. Collectively, however, their discomforting effect is not only cumulative, but exponential.

For her first institutional solo show in Swit- zerland and her largest exhibition to date, the Polish-born, London-based artist presents a selection of newly made and existing art- works. Their vastly differing scales and distinctive themes come together in what may appear as a random mix, yet they are united in their probing of the everyday drama of human relations: the subject of Piotrowska’s sustained interest. These works record rather simple gestures of care, self-protection, or control, but they do so in a way that is curiously evocative and psychologically charged. And while to describe her works as documentation of perfor- mances seems inaccurate (inasmuch as this suggests public acts resulting in documents that would be mere traces after the fact), a perfor- mance of sorts is arguably at the heart of most of them. For unlike photographers who capture images of the world “as it is” or as they see it, Piotrowska deliberately triggers situations between individuals that then can be recorded on camera in an attempt to understand human behavior, societal norms, and the rules that govern how we live together. The conceiving, casting, and orchestrating of these situations is as integral to her art as is the precise cropping of an image or the fastidious hand-printing of each silver gelatin print.

Among her new photographs are those that document empty zoo enclosures: man-made spaces built for the express purpose of containment and the domination of animals. Piotrowska photographs these vacated struc- tures, creating images that are haunting in their emptiness. One notices that the compounds act as both protected habitats for animals as well as places of imprisonment, and they are often modelled on our own domestic archi- tectures (with eating, sleeping, and play areas, none of which are so defined in nature). By focusing her lens in this way, Piotrowska knowingly creates images that reveal human privilege, control, desire, and fear, rather than pointing to anything bestial, in fact.

Relatedly, another body of new photographs and one of the exhibition’s two 16mm color films concentrate on the display of, and engagement with, seemingly obscure, cryptic objects. Removed from their context, these might appear to be devices for human use, whether for health care or sexual pleasure. However, the pictured feeding devices, toys, prodding tools, and other gear are actually meant to either entertain an animal that has been forced into captivity or to attend to it while keeping it at a distance. Still, like the photographs of empty zoo enclosures, these images speak about the desire to domesticate animal life while imagining its needs according to human principles. These themes are refracted by colored wooden spindles punctuating the exhibition space and they alternately signal the balustrade of a domestic stairwell and the bars of animal cages. Their variegated stains derive from the food coloring used in animal chews (which usually endow the chews with the colorful hues attractive to humans while keeping them safe for animals to ingest), again linking human and animal in an ambiguous bond.

These new works are shown alongside a gather- ing of older photographs, one of which, Frowst I (2013—2014), is based on the theories of German psychotherapist Bert Hellinger (1925—2019), who spatially reconstructed family constellations believing they could expose interpersonal dynamics. Informed by this therapeutic method, Piotrowska photographed the interaction of various kinfolk with- in the domestic environments in which they grew up, including the two brothers so oddly lolling about in Frowst I. The resultant image, like so many works in the show, gives form to otherwise invisible social tensions.

A number of photographs track Piotrowska’s long-standing interest in portraying adolescent girls acting out gestures of self-defense, inspired by a 1980s study on psychology and development in women. The photographs of these pubescent teens depict movements that are frozen and isolated so as to appear both cryptic and suggestive, although they actually show defensive or aggressive postures. The interlacing of intimacy and disquiet suffuses the images with an inexplicable charge. Semantically related are a set of close-cropped photographs that reveal a hand pointing to a spot on the body. To study these is to realize they each indicate a vital point, one of the most sensitive areas of the body, responsible for life and death. When self-defense is taught, these zones are often the focus, both because they most need protection and because they are the most efficient sites of attack. In short, they are the very locus of human physical vulnerability.

In the exhibition’s second gallery, a black and white, two-channel video portrays a group of people in a public park, partaking in a series of simple actions whose logic remains mysterious. The actions are provoked, in fact, by a traditional game (named, like the video, Little Sunshine) in which a player wins if he or she makes the other participants smile or laugh. By introducing children to skills such as how to be a team player, how to be competitive, and how to submit to rules, games are generally intended to teach everyday social behavior. This particular game, however, discovered by the artist during her research into games and the ways in which they are integral to a functioning society, asks of its players to rupture social norms by causing the betrayal of emotional composure.

Throughout her oeuvre and so compellingly manifest in this exhibition, the artist deploys various means to apprehend the self—in psychophysical interpersonal relations as well as in the individual, material body, with the latter serving as a setting for personal histories and social dynamics. Gestures of care and pro- tection are juxtaposed with a sense of threat, violence, and of being controlled; all captured by the vigigilant gaze of the camera’s eye. And if across the exhibition, vacant animal cages mirror back at us something all too human, the double meaning of the show’s title, Stable Vices, underscores this. In the world of animals, the term names the undesirable habits that equines, especially horses, often develop as a result of being confined in a stable; outside of this context, it might be read in another sense: describing consistent or habitual human vices. Pointing her finger at the hierarchies we erect as a society—between the human and the animal, self and other, family member and stranger, victim and perpetrator—almost as if these were our own vital points, Piotrowska advances a captivating investigative study of behavior and relationships. The results picture the human, without creating portraits in the
conventional sense.
Joanna Piotrowska was born in 1985 in Warsaw; she lives and works in London.