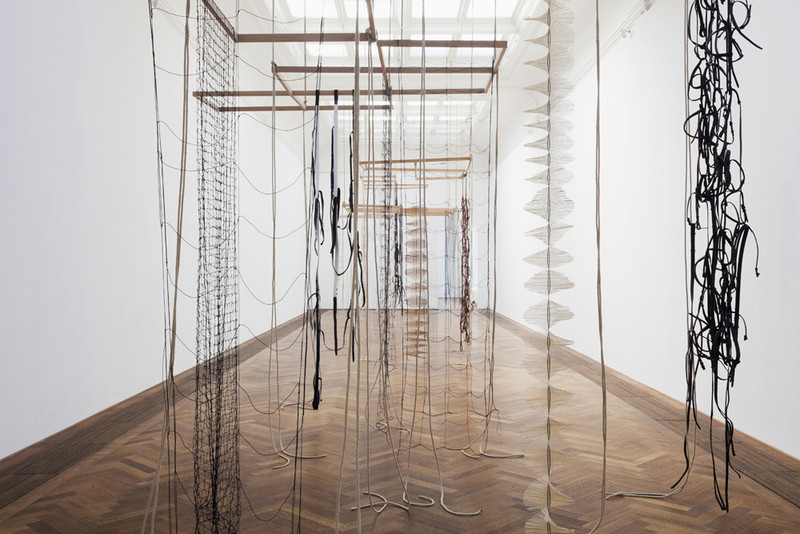 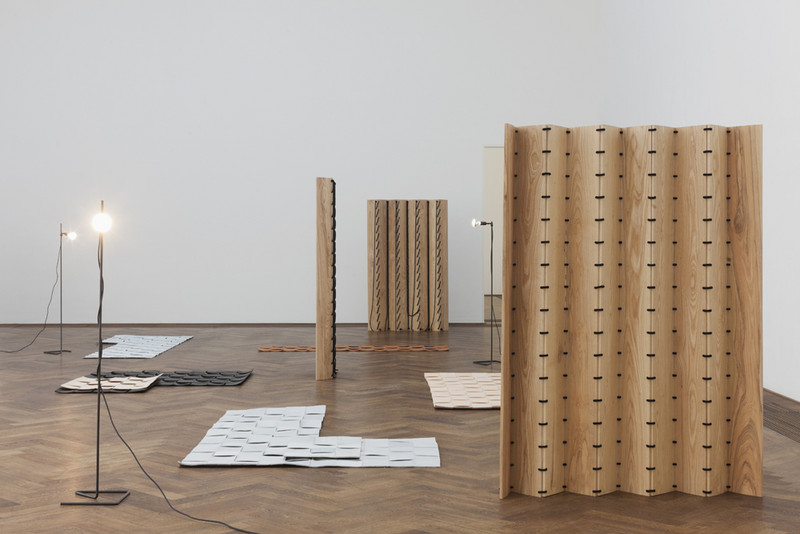 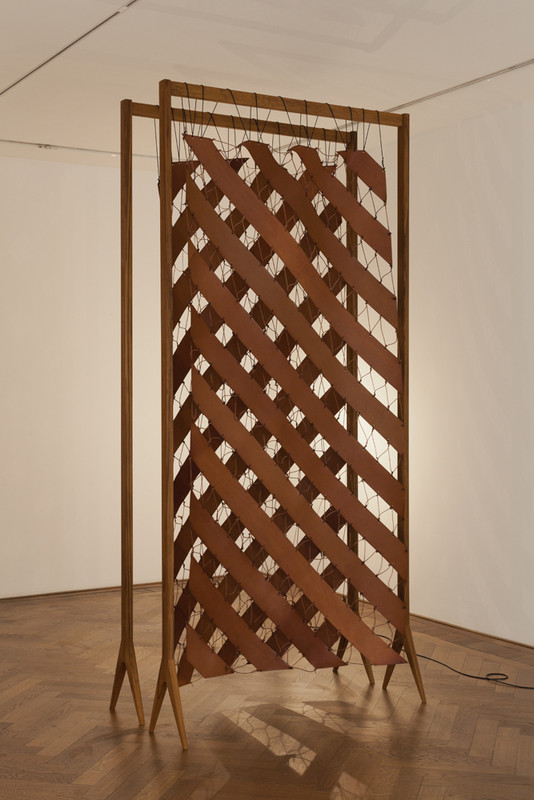 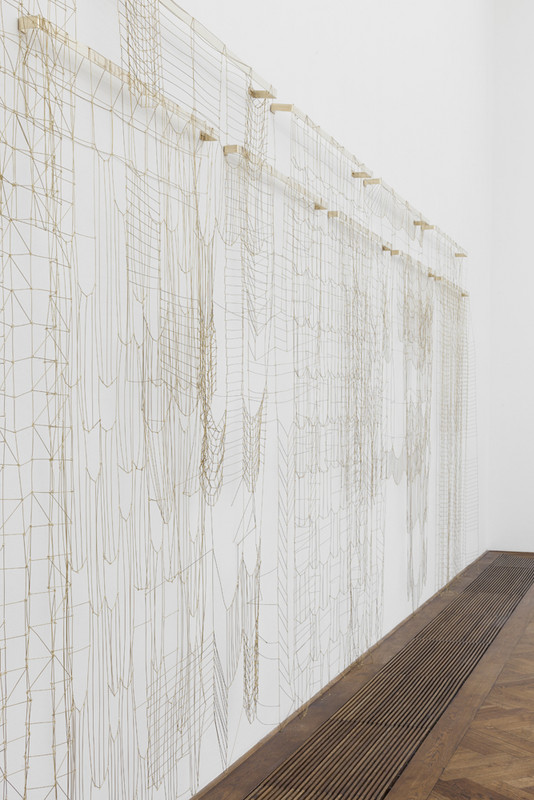 The exhibition the last days in chimalistac at Kunsthalle Basel is the first solo show by Leonor Antunes in Switzerland. The Portuguese­born, Berlin­based artist has used the entire ground floor gallery of the Kunsthalle to present an installation that encompasses a series of sculptural works engaging with the histories of 20th­century architecture, design and art. Antunes frequently takes as her starting point design objects, architectural details and art works belonging to the international Modern Movement. In her own sculptures, these earlier objects are reinterpreted in different materials and may thereby retain their original size or be scaled down. Most of the 20th­century art works, objects and buildings addressed by Antunes are those that employ the grid as the organizational basis of their architectural volume, design or picture plane. The underlying presence of the grid becomes the most striking common feature of Antunes’s own sculptural pieces. These latter are realized in materials that have a natural or slightly antiquated touch to them, such as rope, wood, leather and brass, and use techniques often borrowed from vernacular traditions of craftsmanship originating from various locations, such as South America, Mexico and Portugal. Not only does Antunes carefully reinstate and apply these simple, often archaic technologies in the production of her sculptures, but she repeats, in the individual units constituting their respective bodies, the forms and functional structure of the objects and appliances that served as their models ‒ horse harnesses, fishing nets, floor tiles and room dividers.

Some of Antunes’s works installed in the first gallery possess a striking, seemingly fragile linearity. They are made up of elements as diverse as interlaced and knotted strings, riveted leather straps and bands of cotton threads hand­ woven on a loom. Sagging and floating in the air, rotating or just slightly moving in airflows caused by the visitors’ movement, they are all meticulously assembled from many lightweight parts made of different materials, rather than being carved or modelled out of one solid or soft material. At once defying the gravity that pulls them down and making that pull apparent, the sculptures are hung from three different arrangements of rectangular oak wood frames, which are in turn suspended on hemp ropes below the skylights that run the full length of the gallery in three sections. The wooden frames thus serve as an intermediate structure between the geometric grid of the skylight construction, and the organic arrangement of suspended sculptures that are divided into three ‘rooms’, corresponding to the three skylight sections.

In the fourth gallery, a series of eleven brass nets ‒ modelled on woven wall hangings by Anni Albers (1899–1994) ‒ are hung casually on brass railings. Other works, installed in the second, third and fifth gallery, are standing or lying on the floor; these pieces often exhibit a planarity, as they are built of flat, rectangular swathes of material. They may be similar to freestanding folding screens, made of individual wooden panels fastened together with rope, or assume a form of carpets made of interwoven strips of leather.

The exhibition’s title, as well as the archival image used for the poster and the invitation card, indirectly introduces one of the hidden protagonists of the show. Chimalistac is a neighbourhood, currently a part of Mexico City, just south of the city centre. It is the place where the Cuban­born furniture and interior designer Clara Porset (1895–1981) spent the last years of her life. Porset studied at Black Mountain College in North Carolina with Josef Albers (1888–1976), who came to teach in the USA after the German Bauhaus was brought to an end by the Nazis, first in Dessau in 1932 and then, after the second, short­lived attempt to revive it, in Berlin in 1933. Porset subsequently became a life­long friend of Albers and his wife Anni. Opposing the reactionary politics of Fulgencio Batista’s military regime in Cuba in the 1930s, Porset went to work in Mexico in 1935, and found herself at home in the extremely creative international milieu consisting of exiles and Mexicans, driven by ideas of social progress, in which art and design had a role to play. She returned to Cuba during the Revolution in 1959 but after four years came back to Mexico, where she dedicated herself chiefly to teaching design, thereby advocating the integration of popular crafts, local forms and natural materials into the vocabulary and practice of modern design.

Clara Porset, Anni Albers, the Irish designer and architect Eileen Gray (1878– 1976) and the Italian architect Lina Bo Bardi (1914–1992) are just some of the (mostly) female artists providing a source of inspiration for Leonor Antunes’s practice ‒ not only through their radical social and political stances, but also in their practical aspiration to improve people’s everyday lives through art and design. In Antunes’s work, the appropriation or re­editing of the forms and objects created by her predecessors serves as a technique of study. Antunes’s method involves simple measuring as well as visual and haptic scrutinizing of their works, followed by a reverse application of the knowledge thus gathered about her source objects in the process of making new sculptures.

Antunes’s works result from a meditative study of the functions of everyday objects, and from a contemplation of Modernist forms that can be materialized as sculptures, which thus represent embodied reflection, or ‘thinking objects’. In her thinking­through of objects, shapes and materials, Antunes attempts to reconstruct their inner logic as well as bring to the light the politics that once made them possible and necessary.

The exhibition is organized as a meandering, free passage through several distinctive works that create their own architecture in the space: screens built of oak wood and leather, and a regular pattern made of lines of gilded thread strung along the wall in the second gallery; an installation consisting of several remakes of the patterns in Anni Albers’s wall hangings (woven on a jacquard loom by Anni Albers, rendered in brass wire in Leonor Antunes’s version) in the fourth gallery; and leather floor pieces (including those based on the pattern of tiles on the terrace of Robert Mallet­Stevens’s villa at Rue Mallet­Stevens in Paris) in the fifth gallery.
The first gallery features three groups of sculptures that involve accumulated structures modelled on horse harnesses (in Mexico, Clara Porset collaborated with, among others, the architect and designer Luis Barragán, who loved horse riding), nets knotted out of fine black cotton thread based on the design of Portuguese fishing nets, and decorative suspended spirals made of tiny wooden sticks, employing the technique used by Xingu, the indigenous peoples in Amazonas (with whom the artist communicates by email, occasionally doubting the authenticity of their contemporary crafted objects). The production of these functional objects is rooted in the process of transfer of specific knowledge between cultures and generations. This transfer process is based on the continuity of experience, but it may equally well involve discontinuity and loss, as cultures vanish and their respective knowledge falls into obsolescence.

In her work, Leonor Antunes seeks to understand the construction principles behind rational designs. She pursues a process of abstraction from reality by means of reduction to geometry, and then returns to the practice of making. Delving into the materials, getting to know their physical and aesthetic properties, acknowledging their specific cultural histories and the histories of their makers, Antunes situates her own practice as an artist within these traditions, bridging the Modern movement and traditional crafts through the living practice of making that is a part of the process of passing on knowledge.
www.kunsthallebasel.ch