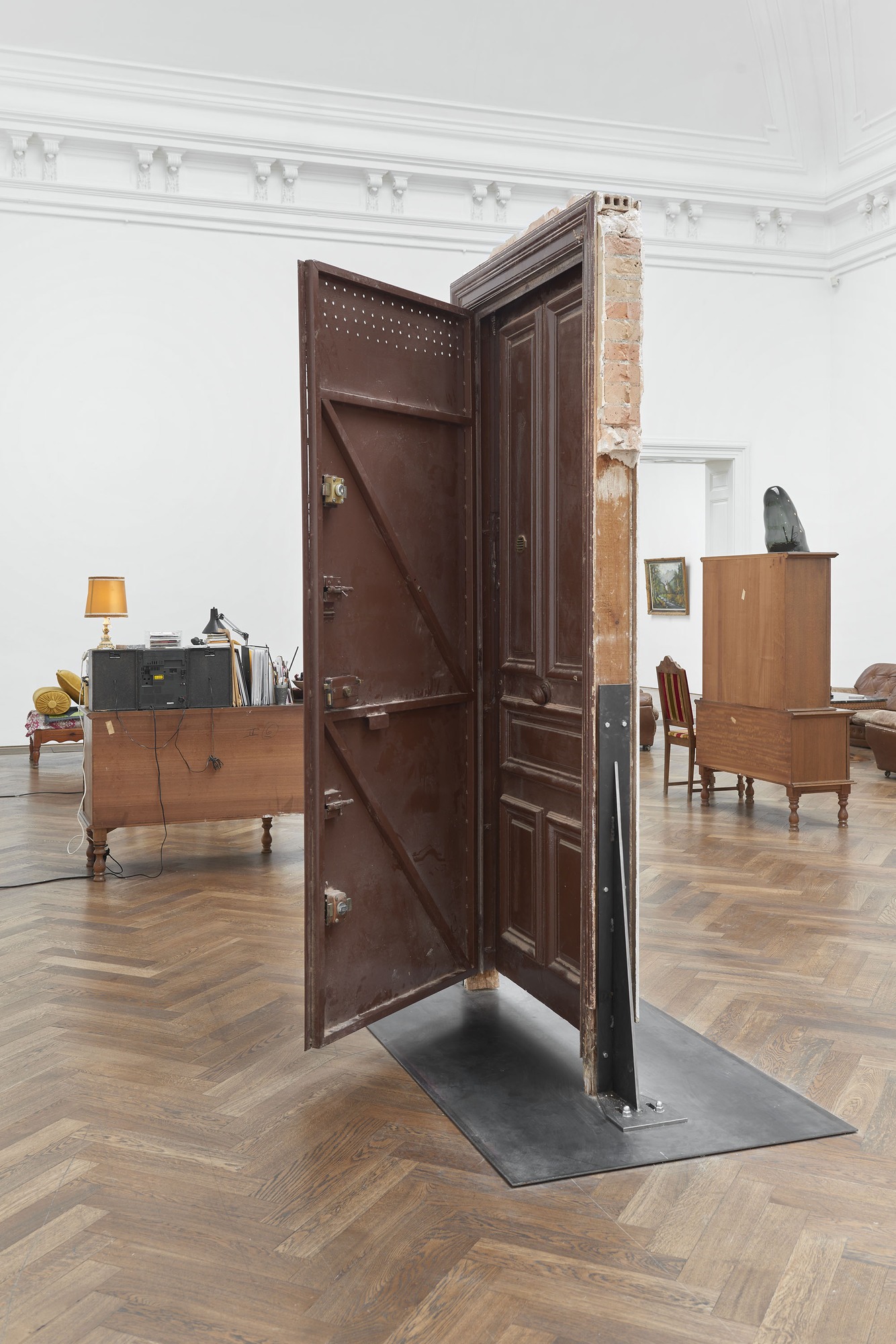 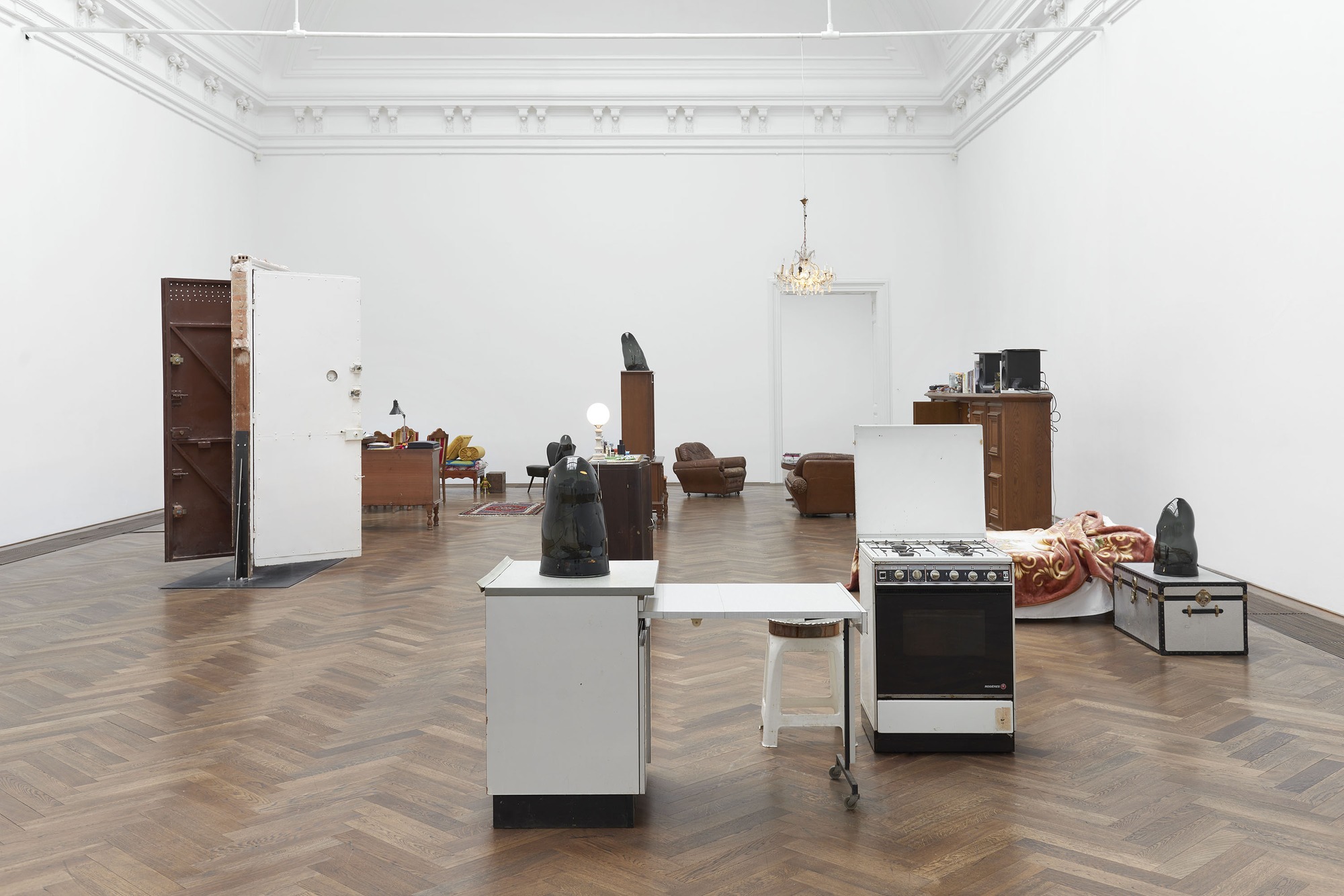 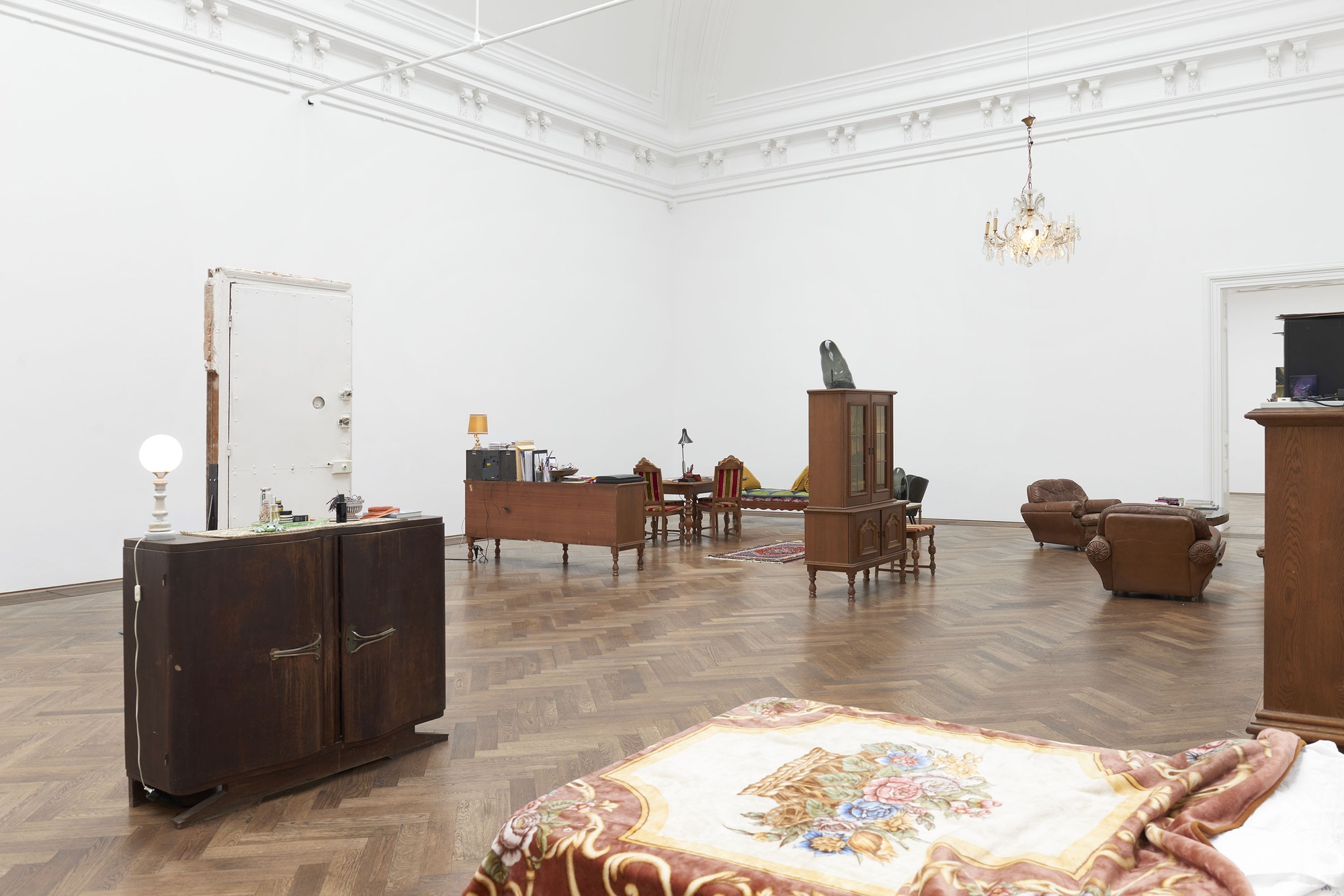 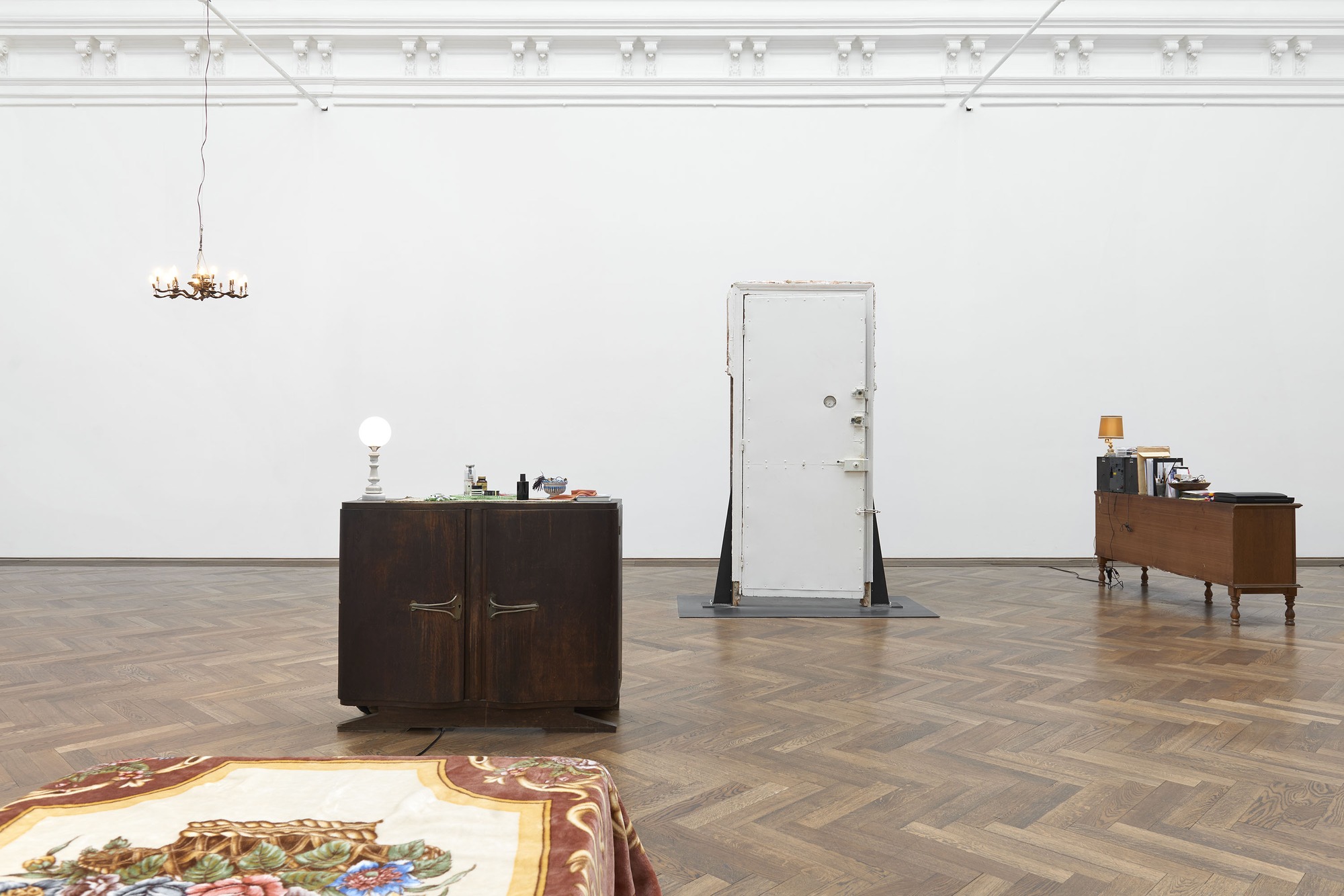 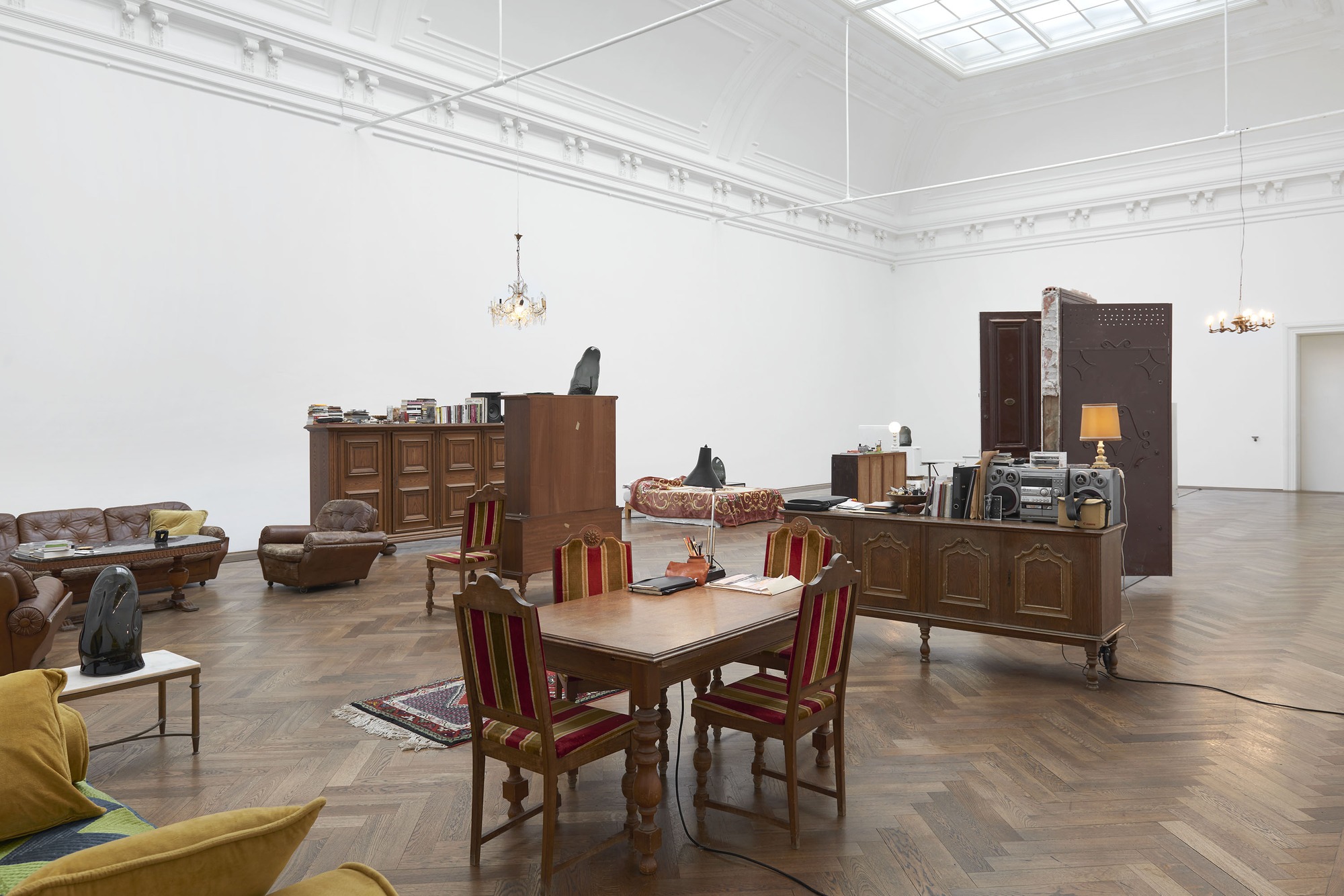 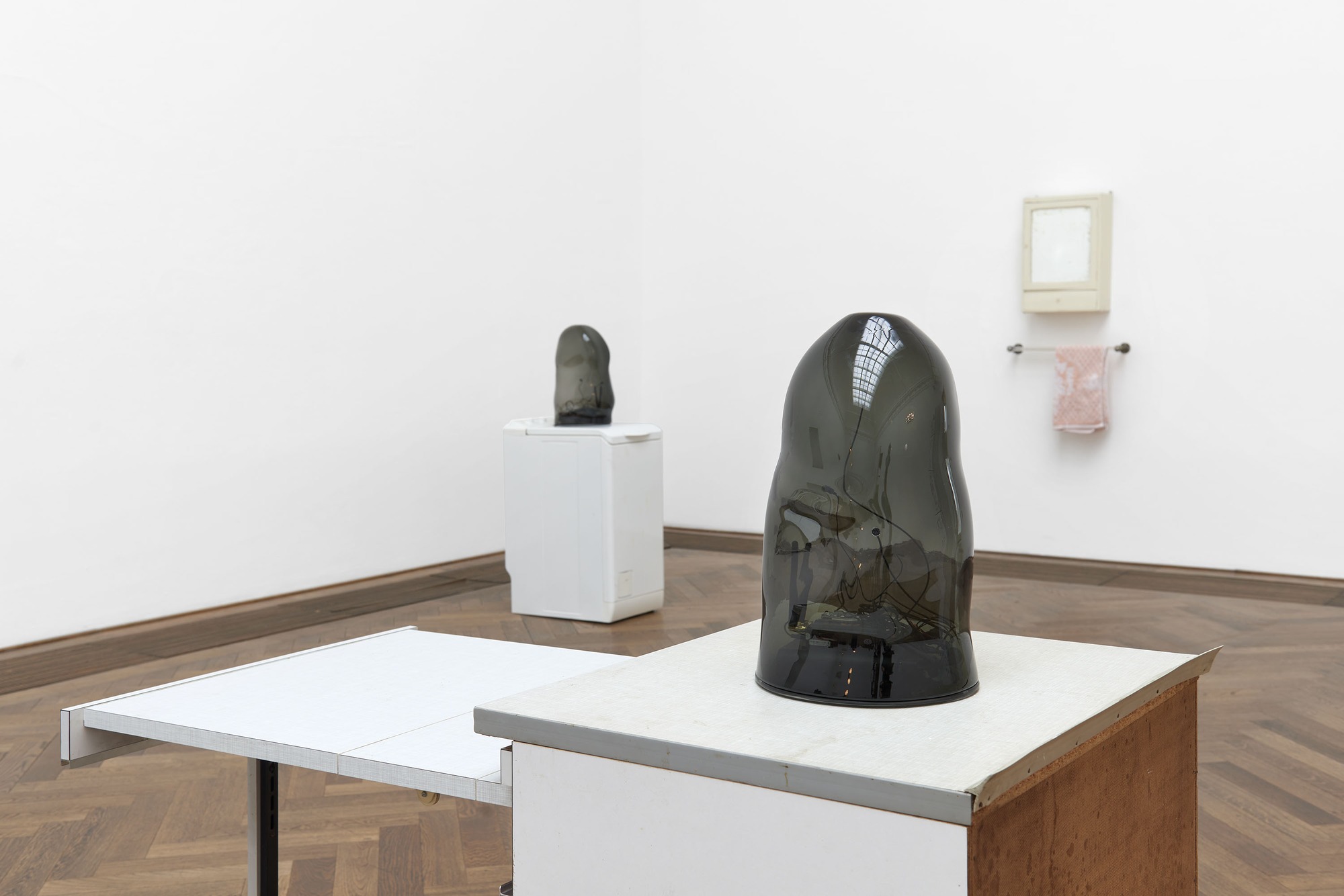 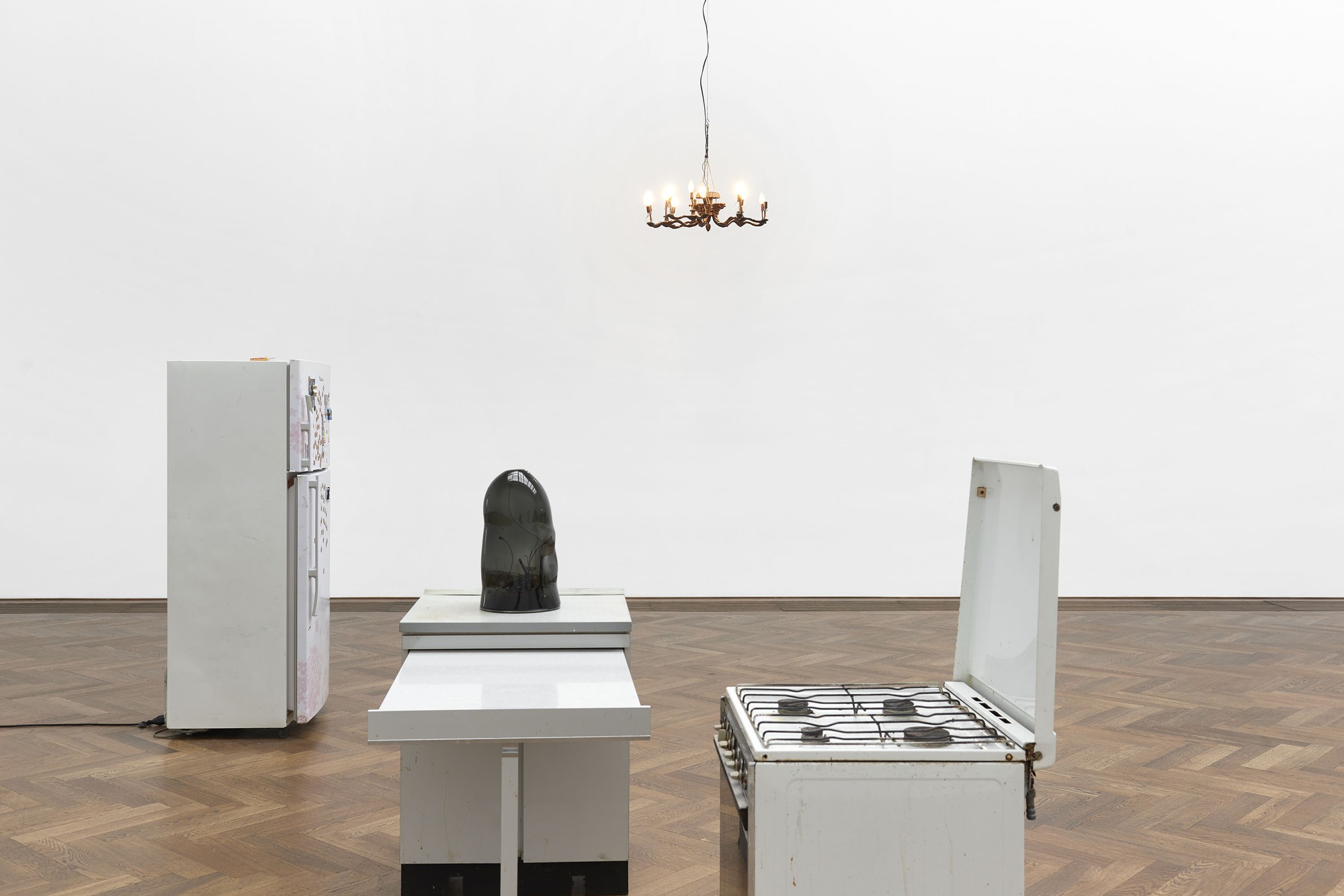 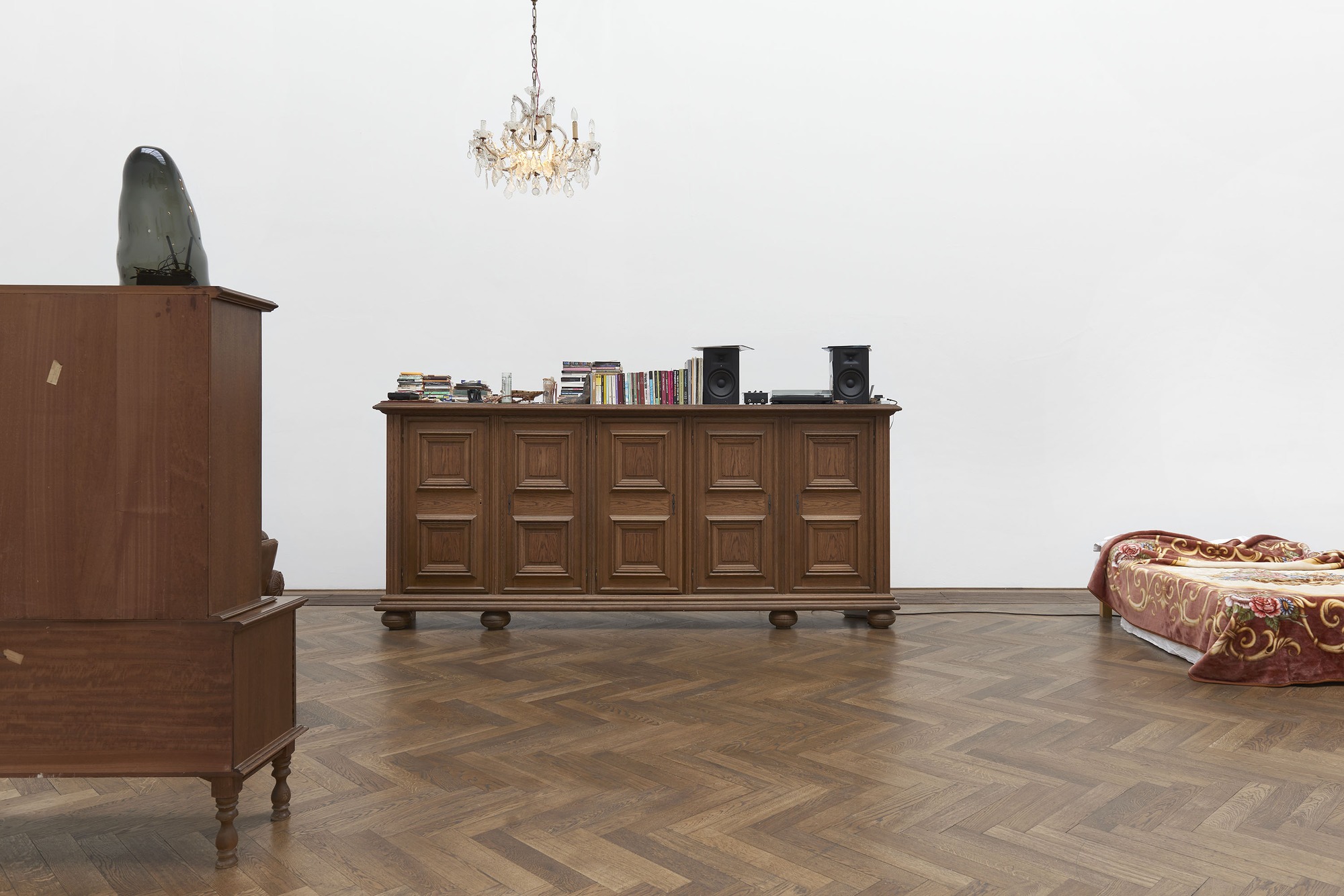 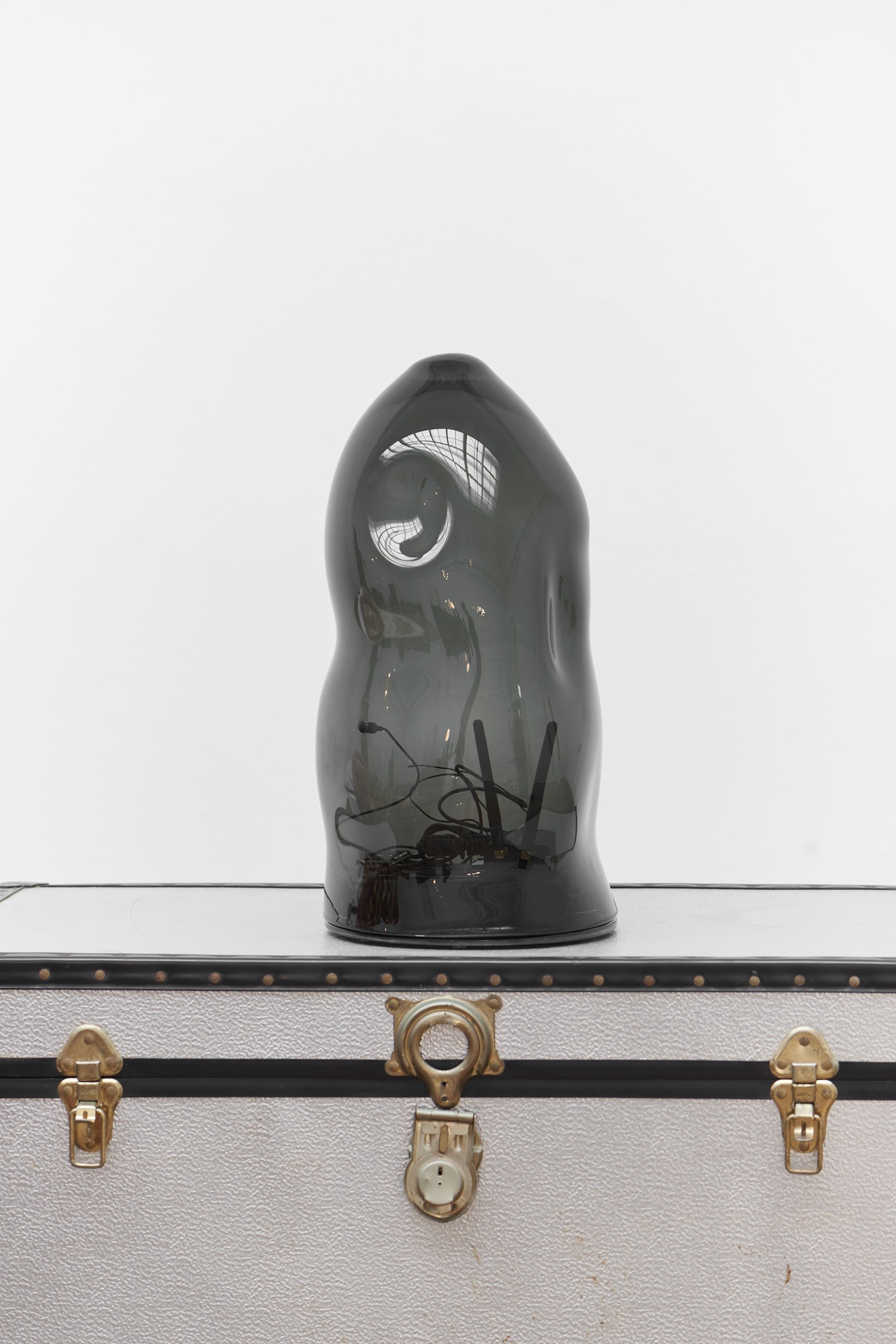 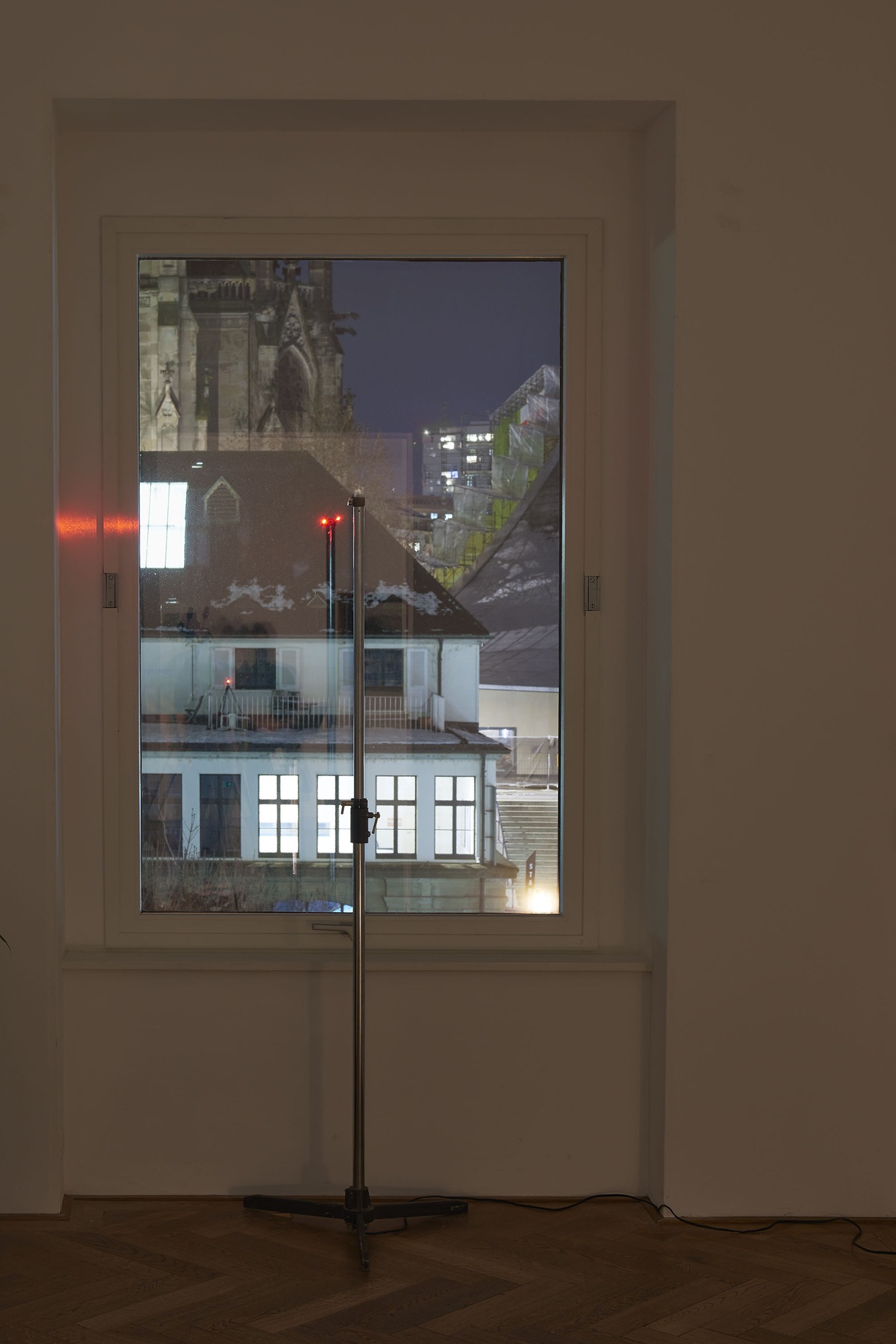 Installation view, Lydia Ourahmane, Barzakh, Kunsthalle Basel, 2021, view on, Eye, 2021 (detail). Photo: Philipp Hänger / Kunsthalle Basel
What makes a home? Is it architecture: bricks and mortar, walls and doors? Is it the sum of the innumerable belongings brought to and held within that space: quotidian vessels of a life lived? Or is it the haunting memories arising in and about any or all of these together? And, about whose home do we speak, when it is occupied by a young, Algerianborn artist who returned to her native home- land only to end up living amongst not only her own things, but also the belongings of the deceased former occupant of her rental apartment? Moreover, is it (still) a home when you take these enmeshed contents— from photographs and dinnerware, furnish- ings and appliances, to chandeliers and doors—transport them 2,625 kilometers north to Kunsthalle Basel and reassemble them as an art installation? Indeed, what are we looking at when the realm of the private is rendered so radically public, when perfect strangers can riffle through a life’s worth, indeed, even two lives’ worth, of objects? Or, when that “home” is traversed by the beam of a laser and riddled with bugging devices so that the sound of visitors’ movements are captured and everything said within it is subject to surveillance?

These and so many other questions lie beneath the artist Lydia Ourahmane’s gesture, transporting thousands of objects from the Algiers apartment she occupied over the past years. Meticulously reorganized from memory, she presents them together with a series of new sculptures and sound pieces as her first institutional solo exhibition in Switzerland. In a remarkable act of transference, she unravels how individuals play a role in such complex constructions as home, border, territory, and nation-state. Hers is, in essence, an inquiry into how we haunt and are haunted by places and how such experiences are constitutive of both the self and what one might call home.

“When occupying a space, which is articulated by objects and furnishings that belong to someone else, you begin to adapt to a preset of gestures that haunt the space, to which you reorient your habits. [ ...] my own body became a stand-in for these gestures, processing them, repeating them, and reinstating them.” *

This inquiry is less concerned with the conjuring of spirits than it is a study of the ways in which histories of displacement and colonial oppression are inscribed upon bodies—a theme recurrent amongst her projects. Here, this questioning takes shape around the ways in which those bodies lay claim to a place and the way in which things may lay claim to those who purport to own them. So, too, is it a study in the disciplining of those bodies through the regimes of surveillance and control, of nationalist bureaucracies and border lines that determine who can call a place “home,” in other words, who is allowed to settle and stay, or who must hide and leave.

Ourahmane’s practice has been consistently driven, it seems, by these questions. Rooted in her own history, her own experience, her own body, she has made the interrogation of such far reaching topics the fundamental material of her art. To be clear: this is not autobiography. This is not art about Lydia Ourahmane. Instead, this art insists that, when it comes to human experience, it is not the generalities that are worth speaking of, not the consensual middle of the road. Instead, there are the factual, actual, some- times painful realities of bodies and their singular, non-abstractable histories and experiences out of which we can extrapolate broader realities, meta structures of power and agency. She commences with what she knows best, revealing through her art vast implications beyond the intimate story at hand.

The laser light that the artist installs on tri- pods on the landing opening into Kunsthalle Basel’s grand hall and in the last room of her exhibition is inspired by a surveillance technique that uses lasers to collect and transmit information by way of a single, tiny beam of light. Emitting from that last room, the laser light crosses effortlessly from inside to outside and vice versa: it crosses the institution’s courtyard, where it hits a mirror mounted on another tripod, causing it to ricochet back and to be received again on the landing, picking up information along the way. This information is translated into an electrical signal, driving a transducer whose vibra- tions impact a second laser emitter in the first exhibition room. This laser beam is pro- jected across the space, hitting a wall, being then picked up and fed into the “apart- ment’s” own sound system. What we hear in the space are, in fact, moments of disrup- tion, where elemental forces such as wind, rain, and snow break the path of the laser light, causing a trembling, a rumbling of sound. But disruption functions in multiple ways, because the laser is rigged so that the body—here it is any body walking through the space and traversing its trajectory of light creates a breach that inhibits the sound: light obstruction causes the live trans- mission of sound from outside the building to stop, or, for the time that a body remains in the light’s path, to simply hum without the presence of information.

Ourahmane knows a laser’s connotations. Its military uses come to mind immediately: the light from a sniper’s firearm picking up a distant target. In the practice of warfare, the laser’s point becomes not only a mark of contact, but it also tells you that you have been seen. One also thinks of its uses for purposes of security, whereby a body’s breach of the laser’s beam sets off an alarm. Which is to say, unambiguously homey this exhibition is not.

“I wanted to relay the feeling of being watched within the domestic domain to overturn its association with rest/safety/retreat. By the audience having their movements echoed around the room and their bodies cutting the signal, it implicates their presence by both providing (sonic) information while their movement hinders its transmittance.” *

While the laser remains almost invisible, a series of five amorphous, dark grey blown glass sculptures, acting as listening devices, sit out in full view. Inspired by the story of the 1945 bugging of the US embassy in the Soviet Union, spied upon for years without the ambassador realizing, Ourahmane decided to create her own sculpture-as surveillancetechnology. Translucent and strange, conspicuously different from the well-worn furnishings of the apartment, they hide in plain sight. Revealing within them the wiring and electronics, blinking lights and miniature microphones that help them to capture the sounds of visitors in the space—snippets of conversation, footfalls, the rustle of things being handled—along with the atmospheric sound of the outside conveyed by the laser installation. The devices transmit live to anyone who calls one of the phone numbers that act as the sculptures’ titles. Their forms are loosely modeled on the shapes of bound skulls, born from a practice discovered across civilizations, in which infants’ heads were bound and distorted so that they grew upward, presumably in order to insinuate nobility thought to be favored by the spirits. If our bodies are our first and most funda- mental homes, as Ourahmane understands, she points to a practice in which bodies were literally forced to contort themselves in order to meet aspirations of increased social status by becoming other than what they were.

A focal point of the exhibition is the door frame and contiguous front doors of the artist’s former apartment, extracted from their actual architecture: the wooden one dates to 1901, when the French constructed the building during the process of their colonial remodeling of many Algerian cities to mirror the regularity, symmetry, and cultural characteristics of the French “homeland.” The door is a quiet testament to this, both to the way the colonial project inscribed itself in architecture and the way in which colonial- ism is, at its core, an operation aimed at unseating ownership of a “home.” At some later point, a metal protective layer was affixed to that wooden frame, and then, in the 1990s, a second metal door was added, with multiple locks and bolts. It was then that a civil war between the Algerian government and various Islamist rebel groups led to multiple disappearances, often occurring at night. Reinforcing the entrance to one’s home was, then, an act rooted in fear. Bearing witness to those layered histories, Ourahmane’s extraction of the apartment’s doors and its nine locks effectively renders them redun- dant, releasing them from their status as an object of fear.

“Barzakh in Arabic is the limbo, the in-between state. There are many translations which relate it as a space where the spirit awaits; somewhere between life and death, or a physical space; a thin strip of land between two seas, a refuge. But it is also a place of judgment, where a spirit waits while its earthly deeds are counted.” *

Lydia Ourahmane was born 1992 in Saïda, DZ; lives and works in Algiers and Marseille, FR.